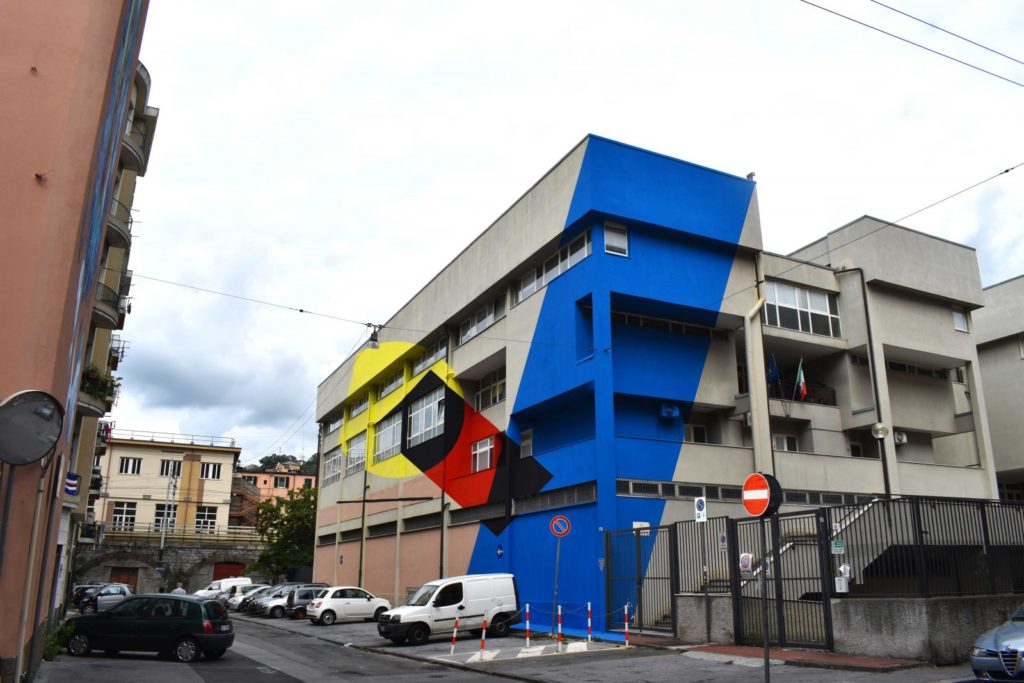 Greg Jager recently finished his latest artwork in Genoa, an anamorphic mural on a school, to find a new point of view. The involved building is housing the Caffaro secondary school in Certosa (IT)

For Certosa, the district of Genoa most affected by the collapse of the Morandi bridge, Greg Jager painted an anamorphosis (an optical illusion effect whereby an image is projected onto the plane in a distorted way, making the original subject recognizable only by looking at the image from a precise position) on the architecture of the Caffaro secondary school, within “On the Wall Festival“, a project curated by Linkinart that Greg Jager joined together with other artists including Ozmo, Agostino Iacurci, Zedz and Geometric Bang. 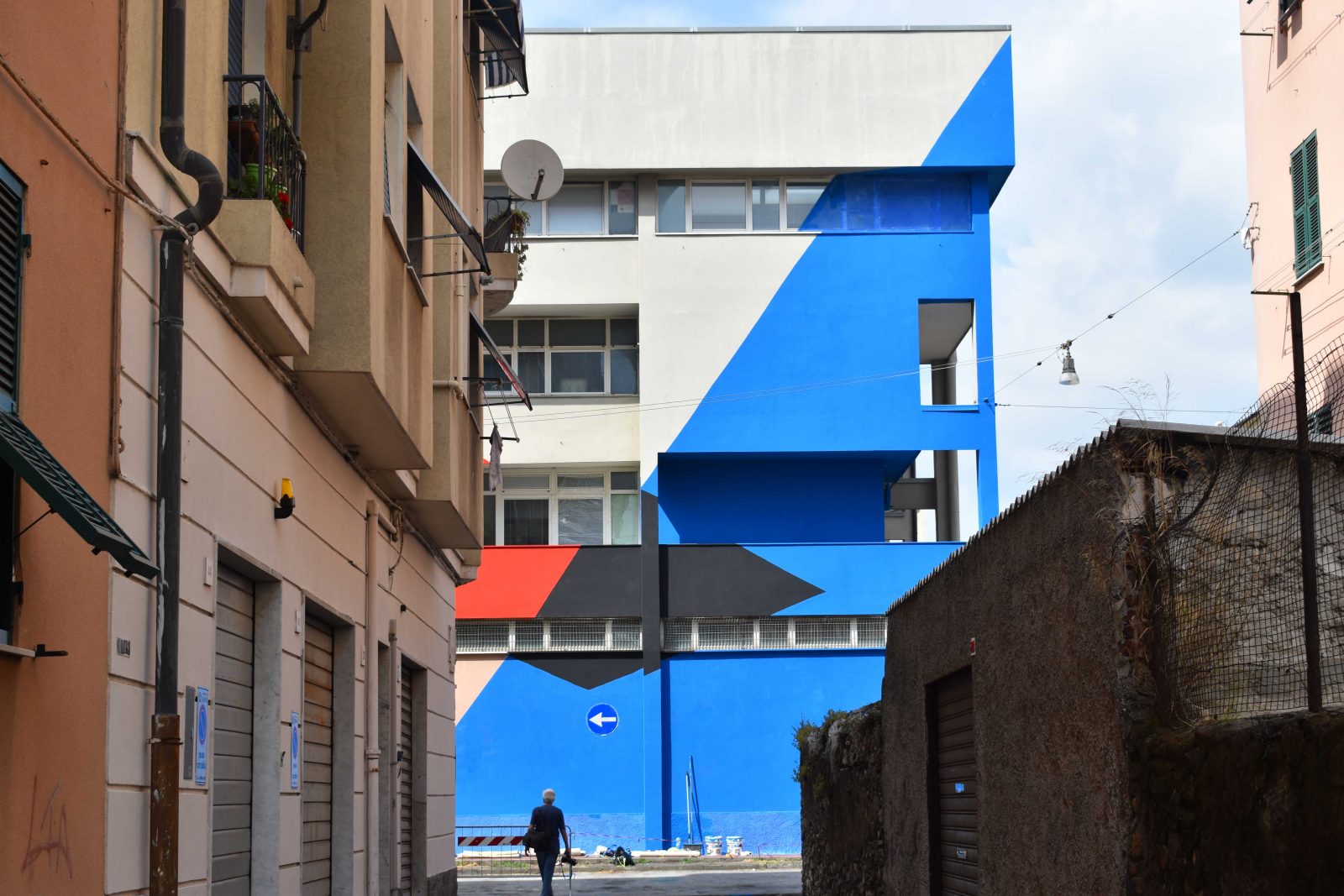 The idea was moved by necessity to go beyond the act of “beautify” the district, trying to provoke the students and the people pushing them to find a new point of view to “reconstruct” the social relations of a stricken community, starting from the terrible accident that caused the death of 43 people and 566 displacements from the houses in the surrounding area. 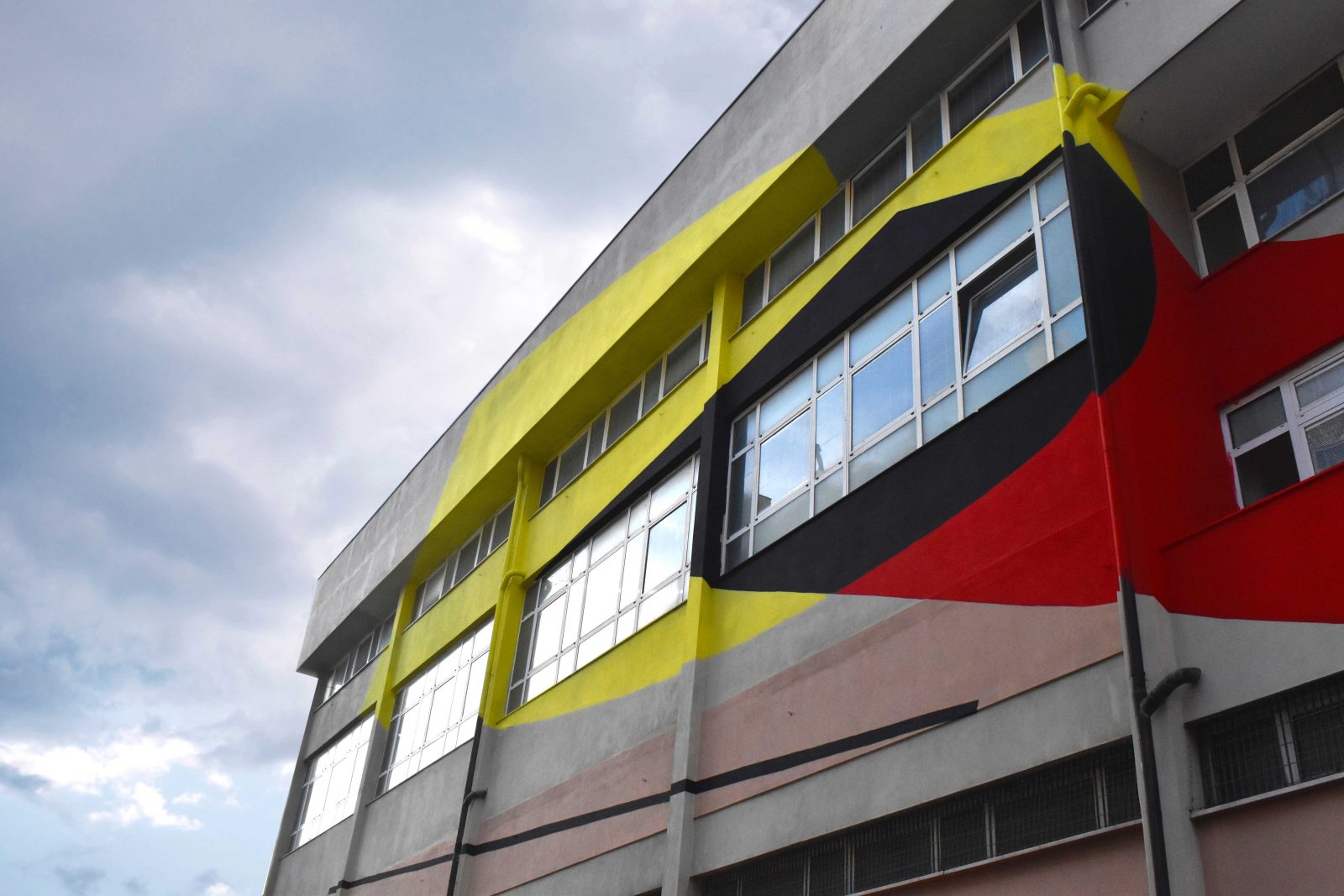 “My provocation is to invite the viewer to look for a side view to face problems not only from a single frontal direction, but also by looking for lateral solutions and change things from below. This message is aimed at young ones. We cannot allow the superficiality typical of the Italian people to permeate the classes of the future. That’s why I chose to work right on a school” says the artist, and continues:

“I found this complex architecture, a challenging structure to paint on, but I wasn’t sure of the result. So I changed design many times, and i had long brainstormings with the curators. At the end we said:”Ok, is a huge crazy project, we don’t know how the result will be, but we don’t care. Let’s do that!”. 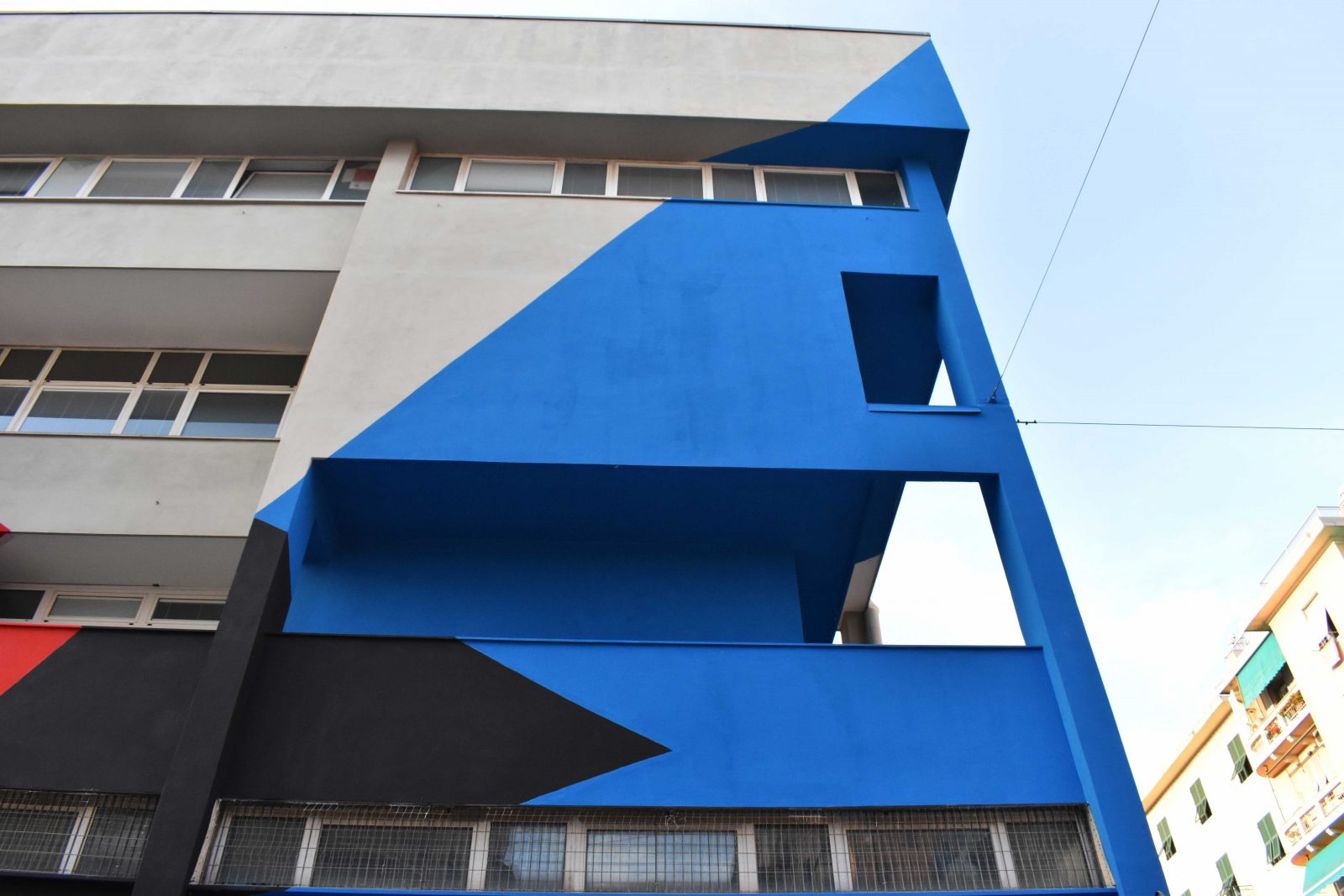 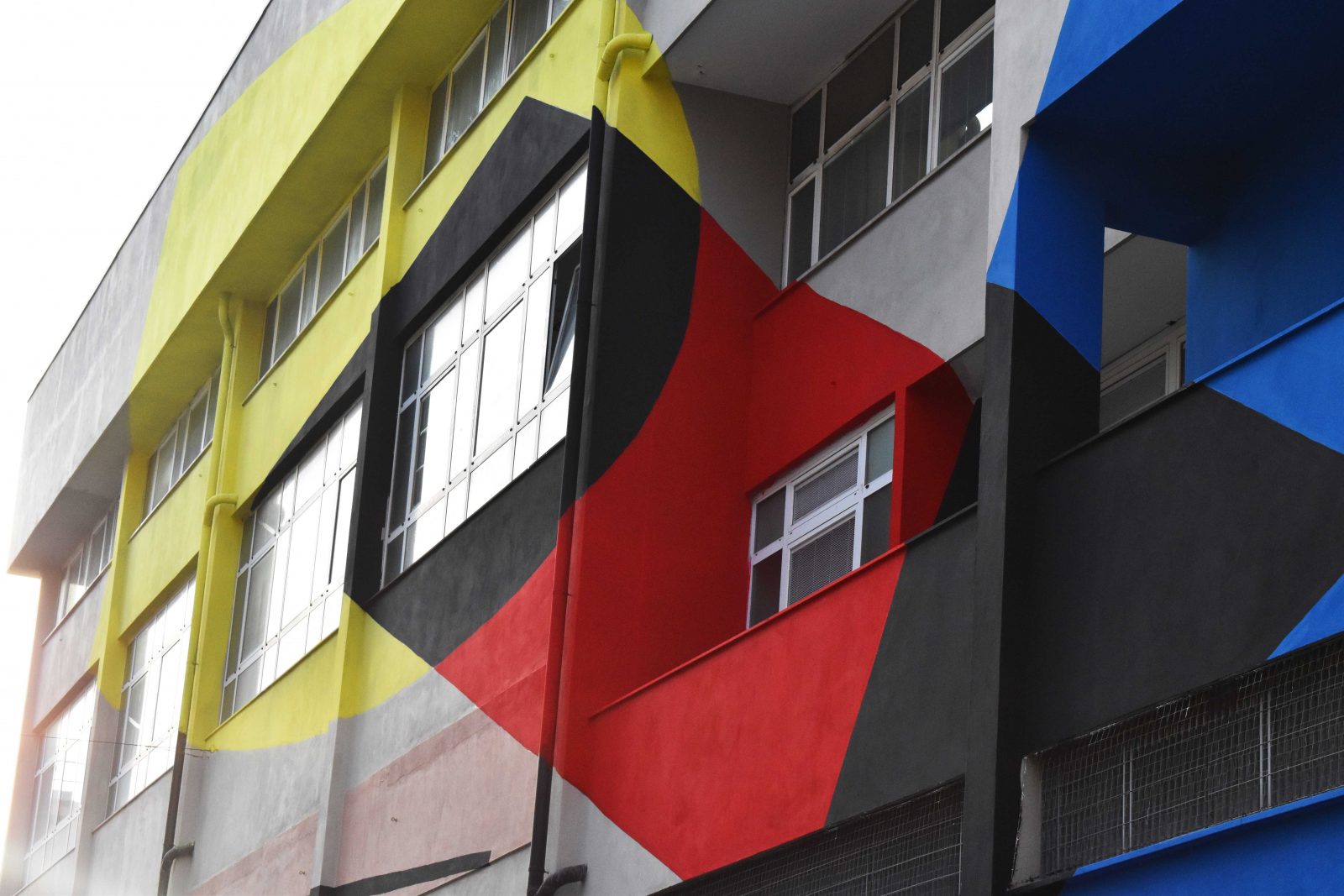 The project was designed to be watched both on the street and on the school’s balconies, giving students the chance to walk through it and discover new and differnet points of view. The artwork has been painted with the big help of the neighborhood’s residents, who joined an anamorphic design workshop, during a week of hard work on over 600 square meters of concrete.

Visual artist (1982) with graffiti writing background. He relates abstract graphics to architectural contexts, with the aim of displacing the viewers by immersing them in an abstract dimension. The dialogue between graphic sign and architecture represents a constant theme of research and experimentation for the artist.

During the course of 2018 he participated in several international festivals, including Athens Street Art Festival (Athens) and carried out site-specific installations such as Metamuseo at the Macro – Contemporary Art Museum of Rome, up to being noticed by a great fashion brand like Fendi , for which he made a large-scale artwork. During the 2019 he produced large scale artworks in Turin, Barcelona, Milan and Genoa. In the meantime he produced the exhibition “The Architectura Eloquentia” at the Contemporary Cluster Gallery (Rome) and joined District 13 Art Fair (Paris) with GCA Gallery (Paris, Nice).

Is an interdisciplinary research platform that places the relationship between man and urban space at the center of its field of research, focusing its attention on indefinite spatial situations [marginal areas of the territory, interstitial spaces, urban voids, places of result, metropolitan fragments] ; adopts art as a research methodology, understood as an elastic boundary line between different disciplinary fields [Architecture, Urbanism, Sociology, Science, Philosophy, Botany, Design]; it passes from a multidisciplinary design process to a trans-disciplinary one, developing fluid investigation methods, able to read the territory through contemporary languages.

It uses dynamic tools: international workshops, direct surveys on the territory, events, nomadic ateliers, media actions, in order to generate new potentialities of the urban landscape, favoring the redevelopment and livability of problematic city areas and the development of a new critical conscience and participatory; develops projects of investigation and territorial action through interaction with citizens, institutions, associations, universities, research groups, both local and international, activating synergies and networks capable of developing design strategies adapted to the complex reality.