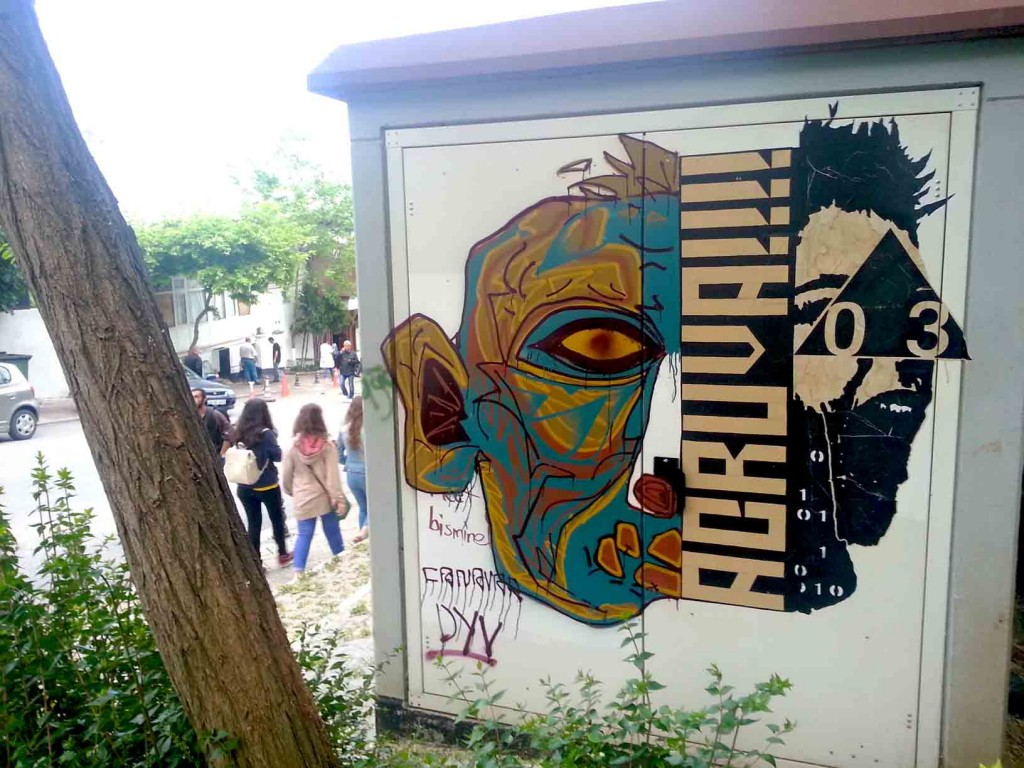 Through the following content you can comfortably enjoy, first hand, the experience obtained by artist D Young V as he travelled to Istanbul recently and later on sent us his written depiction of the whole trip.

So here it goes with his memoire:

”It was a spontaneous decision to visit Istanbul. I was sitting in a Hong Kong cafe with local tattoo artist Ross Dixon Turpin (co owner of Star Crossed Tattoo), he had been putting me up in Hong Kong for the last few nights. We were talking about potential countries to do street art in. 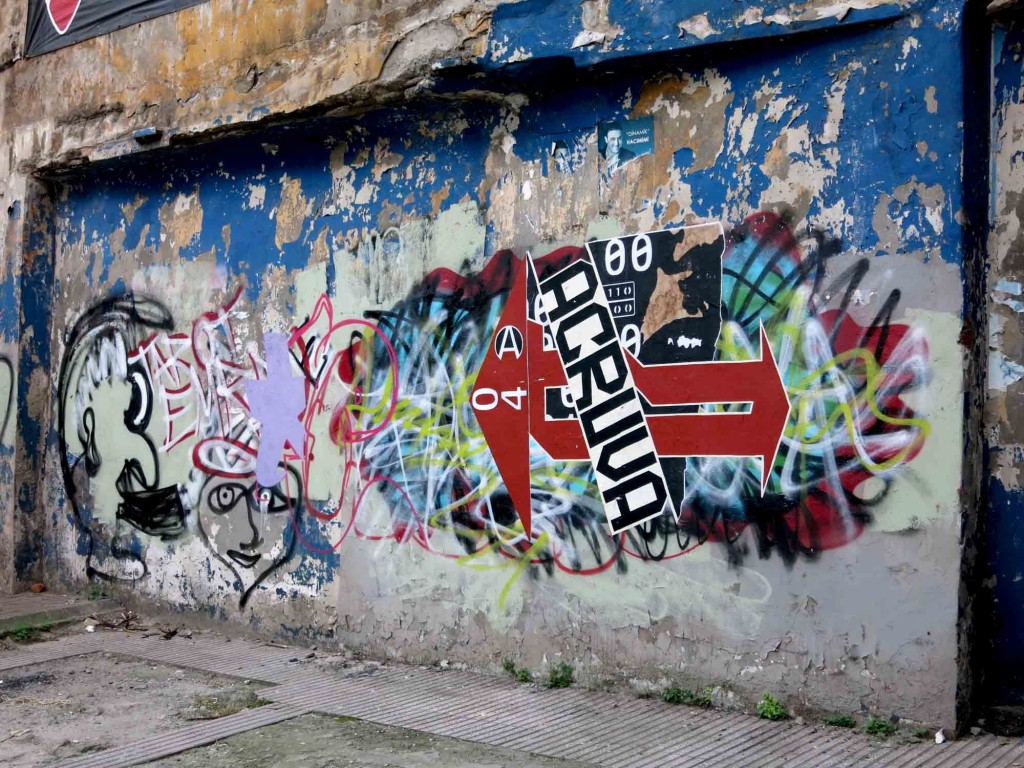 Very enthusiastically, he said that I need to pay Istanbul a visit. He had traveled there recently
with his wife and told me that this city is pretty much free reign for getting up. A few days later I
was sitting in an airport bar in Seoul, South Korea with an Australian couple that had just
traveled to Istanbul. The told me how alive the people are there, they spoke of its deep culture
and busy streets with great excitement. They seemed regretful to be going back home. Days
after this I found myself watching live Turkish music in San Francisco’s Revolution Cafe. The
music was loud, fast paced and full of life, the women in the band were of Turkish decent and
beautiful. I knew after these three experiences, it was time to book a ticket. 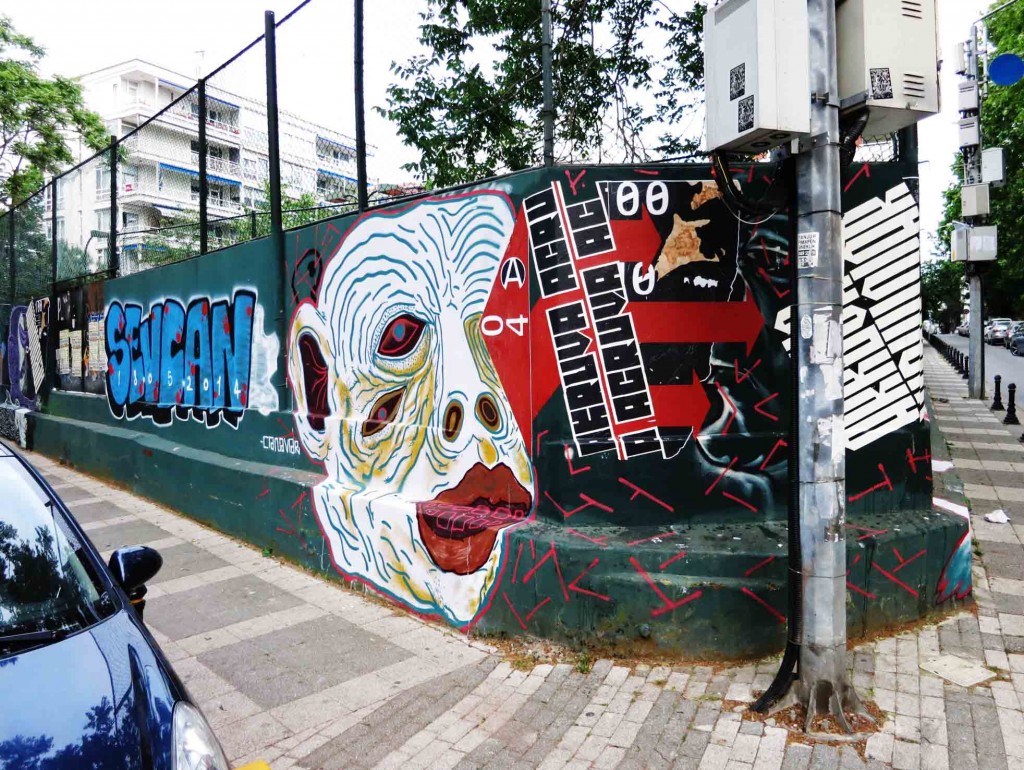 I find it generally easier to put work up in the streets during the warmer seasons so I booked
my ticket for May. I had virtually no contacts there with the exception of a gallery I emailed,
Mixer Gallery. Luckily I was to later pay that gallery a visit and connect with some of the locals.
I had spend time watching documentaries on Turkey, Istanbul, and Syria. I had never
traveled to this part of the world and found myself very nervous. Istanbul has reported a 99%
Muslim population, it’s streets are filled with various left/right opposing political groups, mass
amounts of Syrian refugees escaping the war, anti gentrification protests that lead to violent
clashes with the police, emerging Kurdish insurgent groups along with a string of Al Qaeda
attacks on Istanbul and neighboring Turkish cities in recent years. All of that coupled with the
fact that I don’t speak Turkish gave me some minor anxiety. 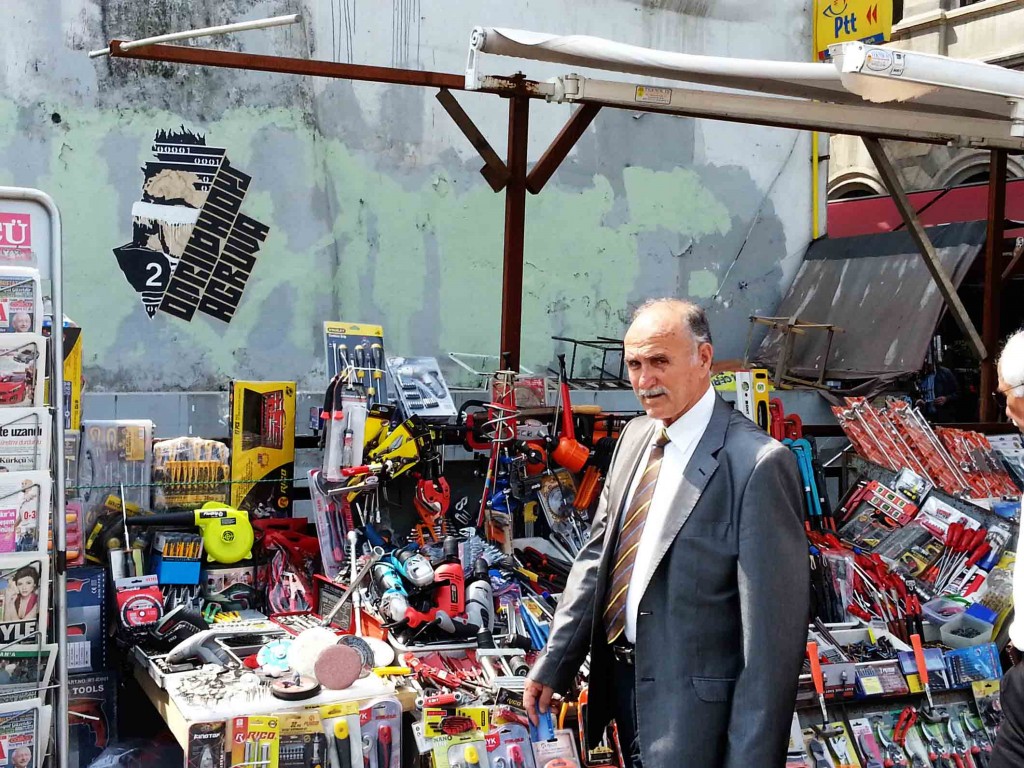 I had contacted a number of artists that had traveled to Istanbul as well as Turkish people
who migrated to the Bay Area. After being briefed on what to expect, where to go, what to see,
etc., I was put at ease. Aside from doing street art, I was excited to walk Istanbul’s narrow
streets, enter buildings dating back to the Roman era, visit the city’s numerous Mosques, view
it’s Byzantine architecture and eat it’s delicious food. I was still a bit nervous but very excited.
I planted myself in Istanbul’s Beyoglu district, located in the heart of Istanbul with easy
access to all surrounding neighborhoods. Keeping up with the general theme of my work, I
switched my color palette to an assortment of brick reds, browns and whites to fit in with the
general colors of the city’s architecture. 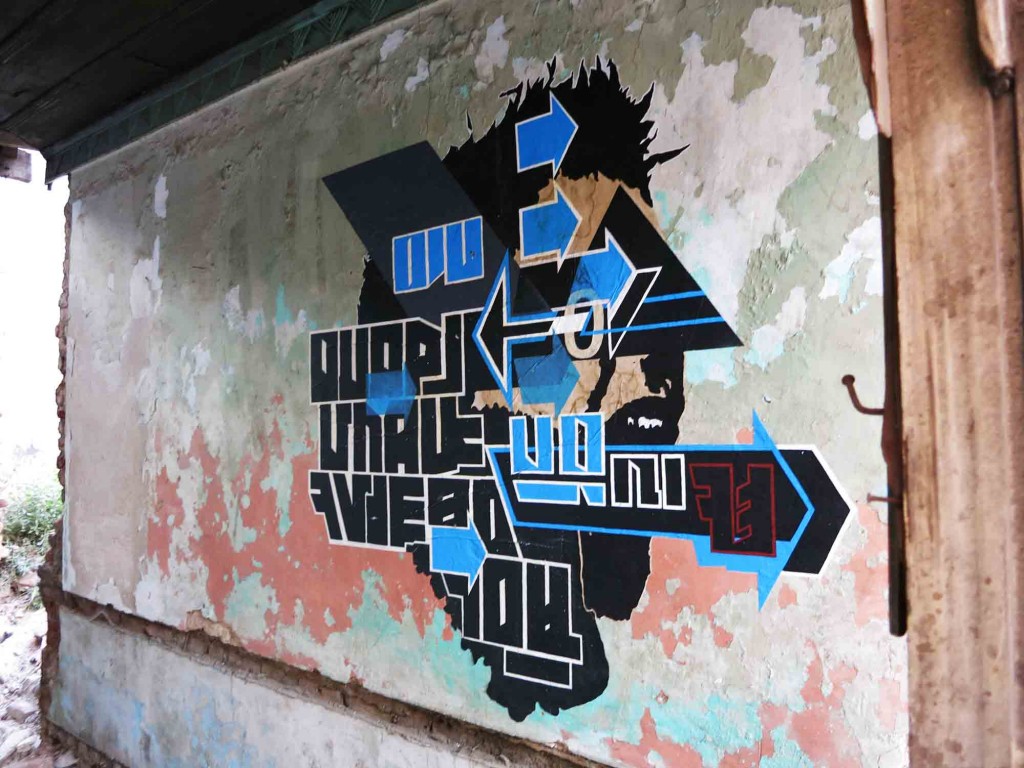 Beyoglu is a neighborhood that is large in size and massively dense with people. It’s walls
are covered street to street with extremely well executed graffiti pieces. Literally thousands of
pieces can be seen on every roller door, ground level wall, alley way and accessible rooftop.
Finding it difficult to find open space in that area; most of my works in Beyoglu can be found in
abandoned lots, on top of demolished buildings, rooftops above local markets and residential
areas sightly off the more busy streets. 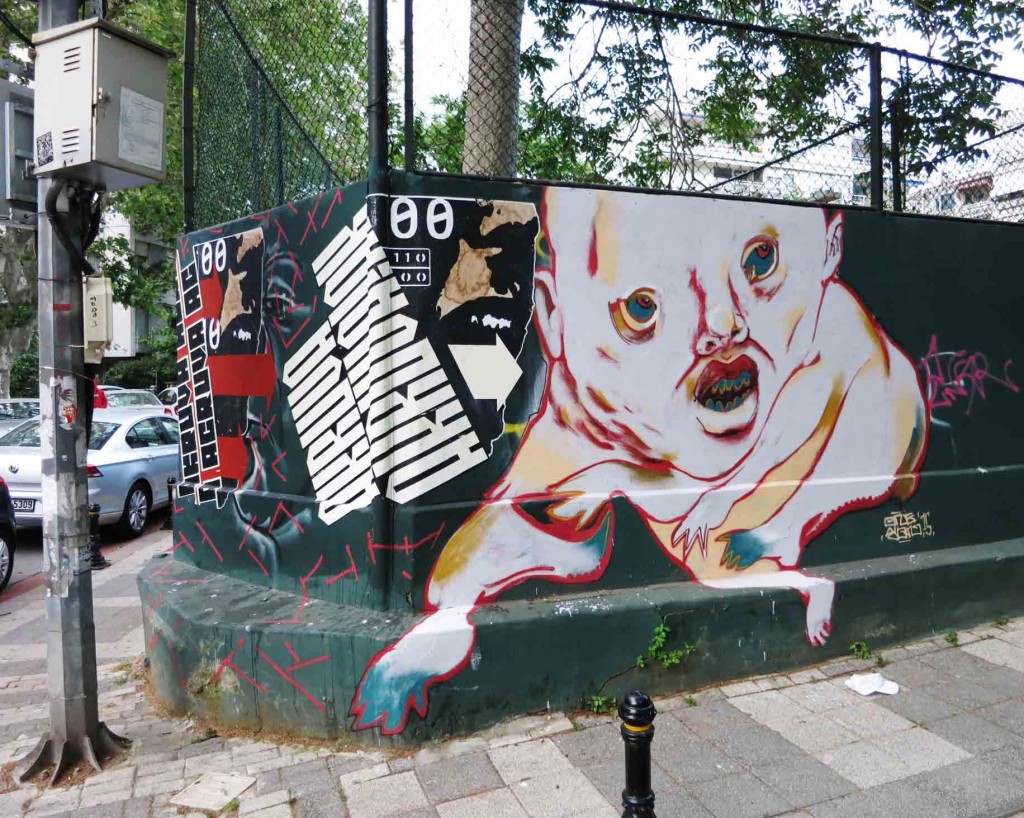 Just over the Bosphorus Strait exists Kadikoy on the Asian side of Istanbul. Kadikoy offers a
variety of well executed graff pieces, enormous sanctioned and unsanctioned street murals and
a very large street art scene. Unsolicited pieces done by the artists in this neighborhood can be
seen covering whole sides of buildings, roof tops, freeway entrances and public parks. The
artists here are talented, courageous, ambitious, defiant, and very open to collaborating with
travelling artists. Thankfully, through the help of Mixer Gallery I was able to connect with local
artists: Canavar, Oneson, Ares Badsector and Gevsek. 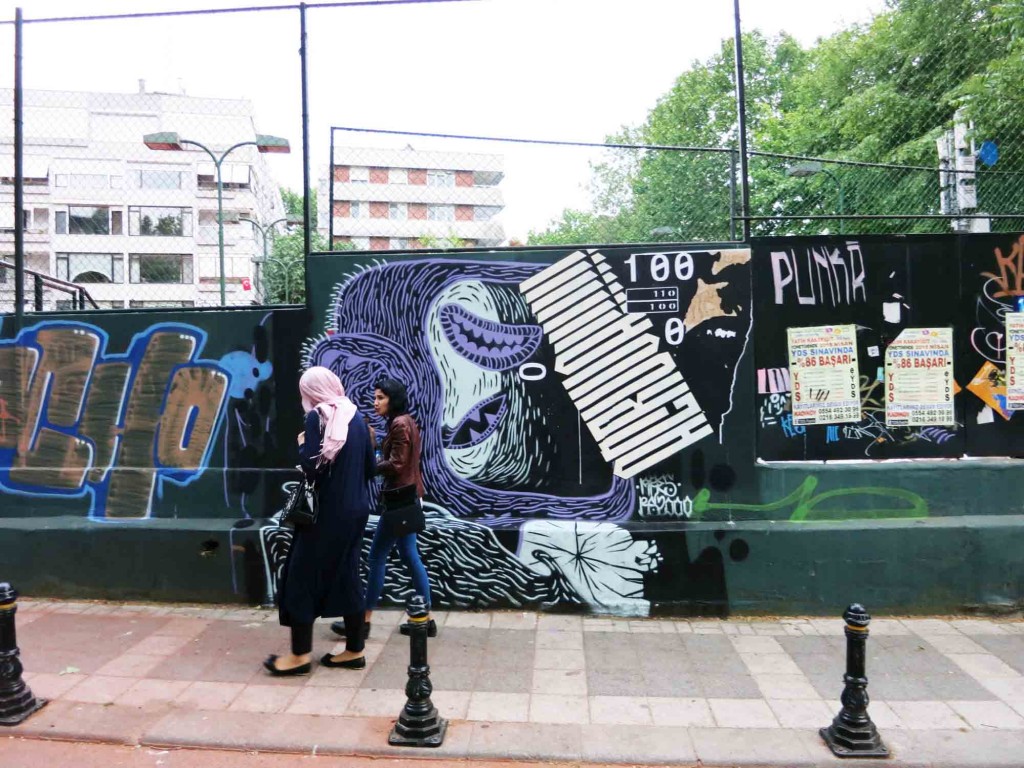 They took me around Kadikoy in search of walls. We spent the late evening/morning creating collaboration pieces all around that area. That evening made the trip for me, increasing my confidence in what I was doing there, as well as shedding light on the general dynamic of Istanbul street art and the artists involved in it. In a city of nearly 15 million people that are up during all hours of the night, there is always someone around watching you. Even down the darkest and quietest alley at 5am, there are still
people hanging out. This can make one very nervous when putting up work. What I learned in
Kadikoy is just put your work up regardless, take your time to get it right and 99.9% of Istanbul
people will not bother you at all. This gave me an increased comfort about the whole thing.
During my last days in Istanbul much of my focus was spent on pasting up work in Balat.
Balat is a predominately Muslim area filled with a variety of new and old architecture, narrow
uphill streets and a great public park along the Bosphorous. Many of it’s older, abandoned and
nearly demolished buildings allowed for excellent placement for more elaborate pieces. The
works I put up in this area can be seen on both building interiors, exteriors and remaining stand
alone walls of some of the more demolished structures. 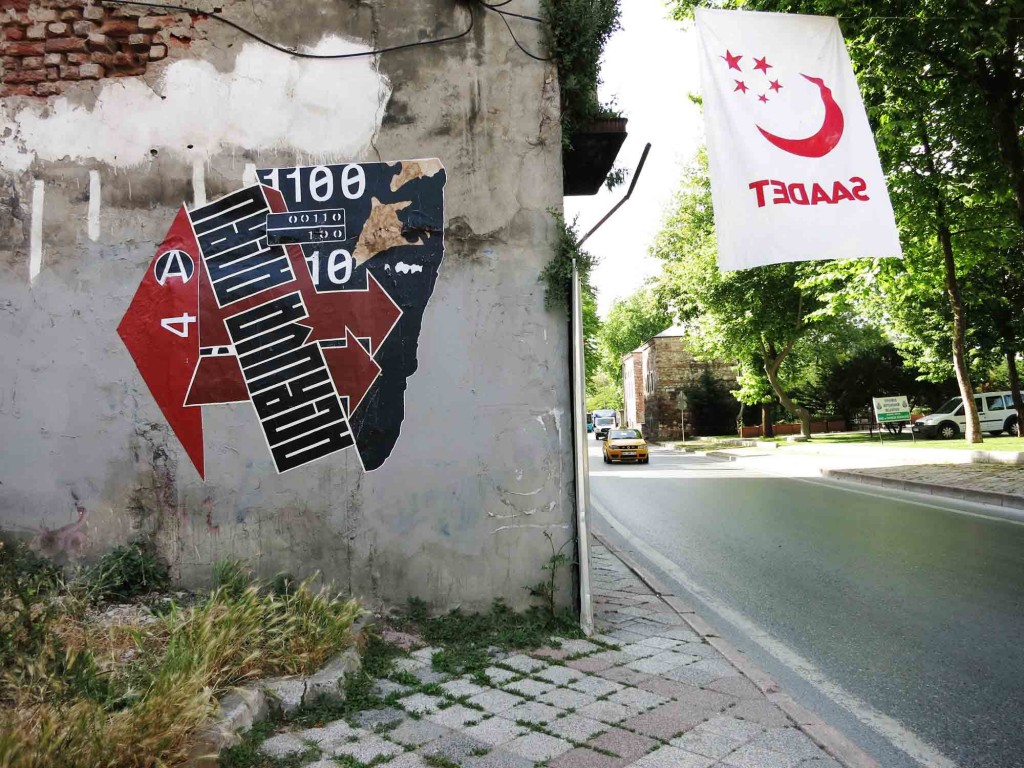 I believe that doing street art in foreign cities adds a unique perspective on the dynamics of
that city’s culture. For me, a neighborhood has to be visited three times. One day to scout, one
night to get work up and a third follow up visit to photograph and interact with the completed
work. This allows for hours upon hours of exploring new alleyways, residential areas, visiting
mosques, eating at local cafes and interacting with locals all while working. It’s a very rewarding
experience. The perspective of getting work up allows for visits to areas that one may not travel
too otherwise. 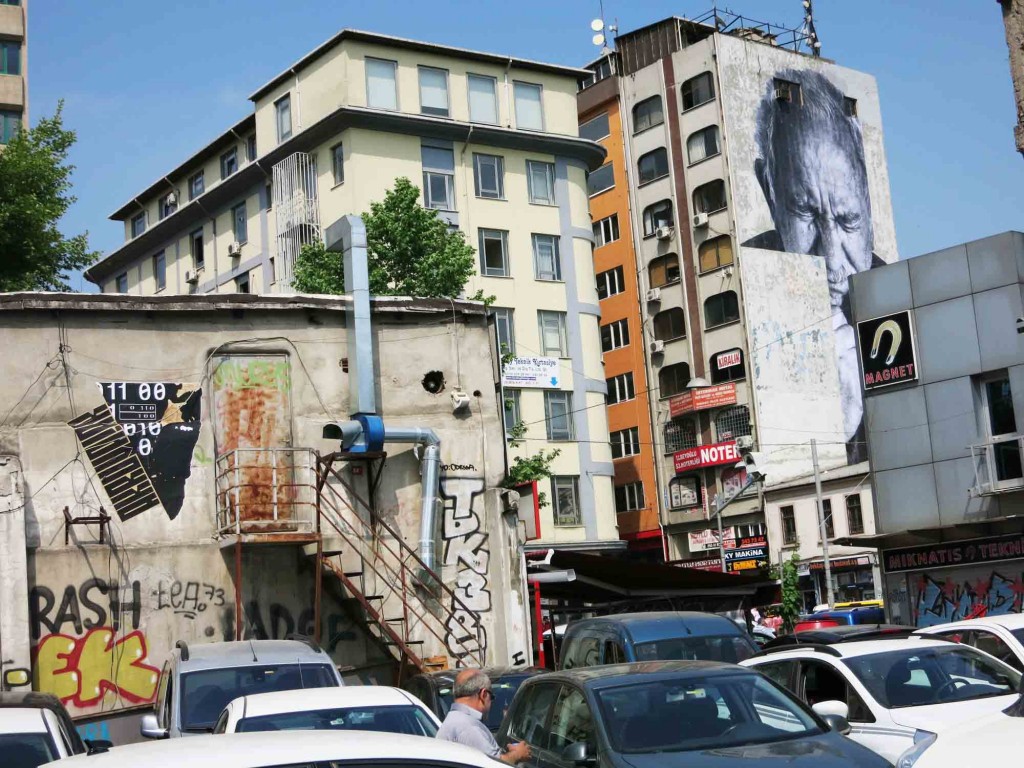 I’ve been back in San Francisco for just over a week, still recovering from my experiences in
Istanbul. It’s always hard to reset after a trip like that. I’m curious to see what changes may
occur in both myself and my work as a result of this trip. Travelling provides the ability for one to
rethink their perspectives, potentials and see their own life and culture with new eyes. I’m
excited to see what the following months bring as a result of this adventure. 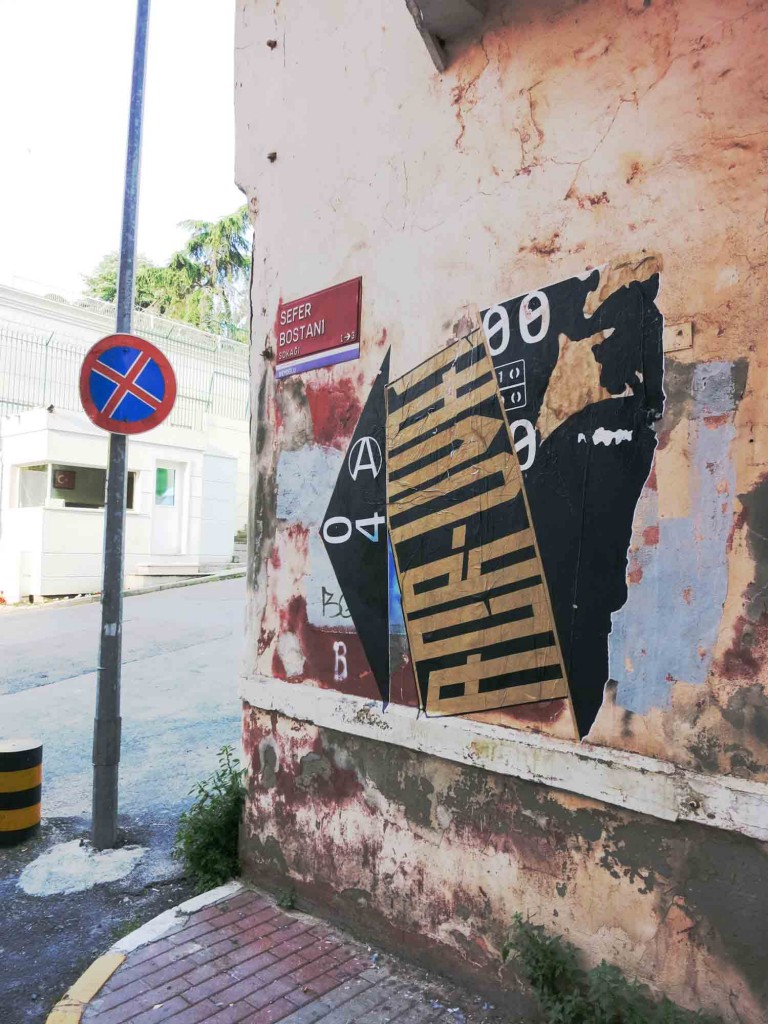 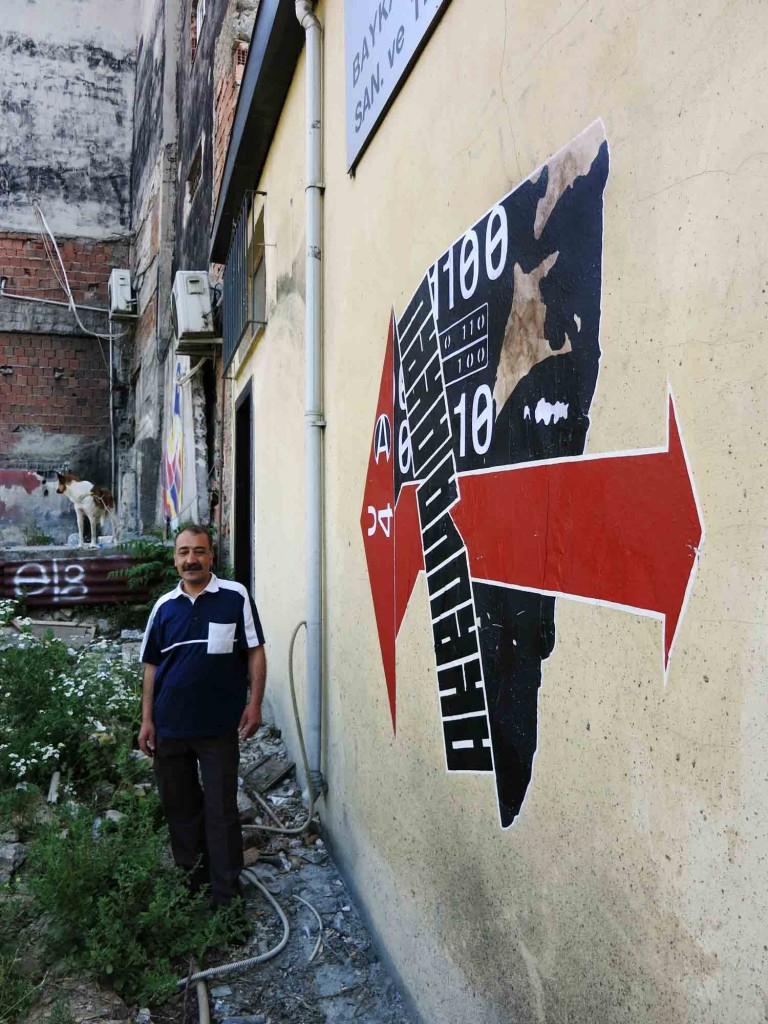