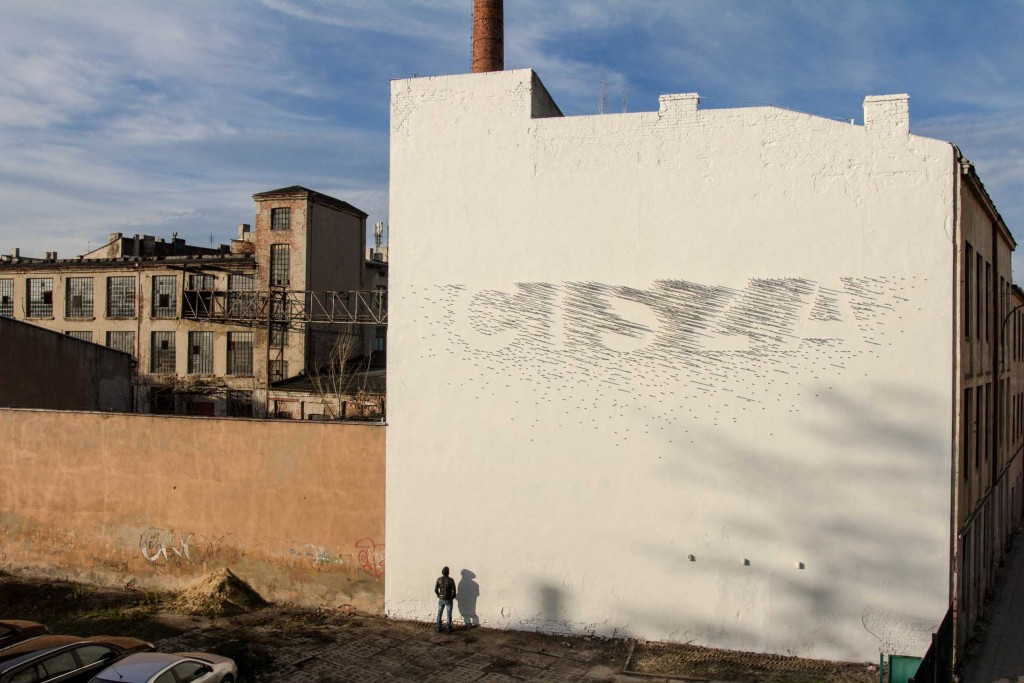 “Silence” („Cisza”) is a unique artistic installation which consists of 1300 metal bars made of stainless steel. These metal bars are fixed directly to the wall by chemical anchors and they are arranged by size – from the shortest elements (3cm) to the longest (60cm). 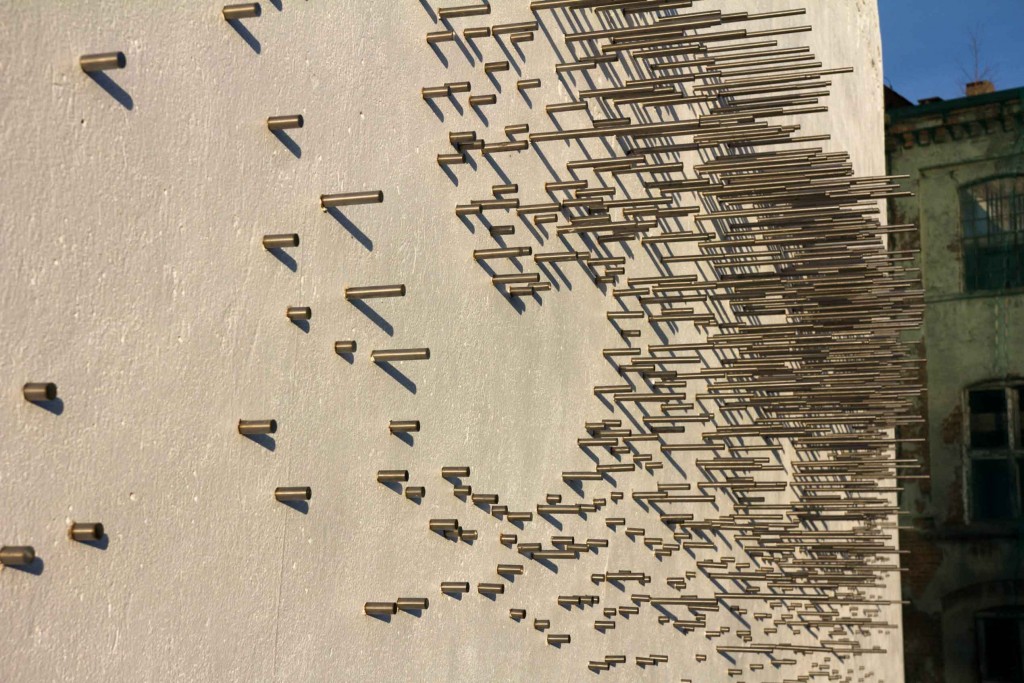 “Usually, I was looking for adequate walls in the city centre and sending the photos to the artists. Then, the artists were preparing projects of the mural taking into account the size, the form and the character of the chosen walls. This time, it was the other way around – I received the sketch first and then I had to find a matching wall. This task wasn’t that easy, even if I have 6 years of experience in that area. The wall had to meet several conditions. First of all, the direction of the wall had to be southern. We needed as much sun on the wall as possible. Secondly, the surface of the wall had to be totally flat without any windows and in a really good technical condition. Thirdly, the wall had to be well exposed – the surrounding area (other buildings and trees) should have no impact on the wall in order to avoid possible shadows. The last condition was the hardest one – we needed to obtain the permission from the owner to drill and fix 1300 metal bars (which weigh more than 500kg) into the wall. The owners were mainly afraid of that. Nevertheless, after a couple of weeks of searching I managed to find the wall on Wolczanska 13 st. In the meantime, the project of the installation was also a bit changed and updated. Lukasz prepared few versions matching the walls that we found and in the end he “crystallized” the final one”. 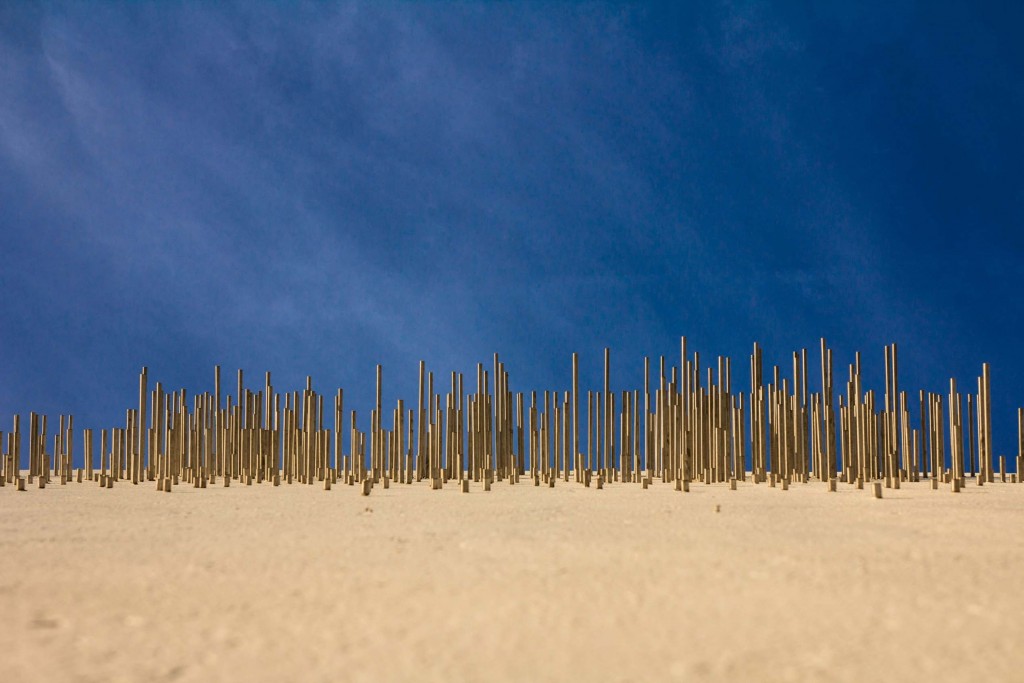 The installation is permanent and it’s playing with the light and the sunbeams. The everyday cycle of the sun creates a dynamic character and the “drawings” made of the shadows are directly related to the time of the day and the season of the year. Apart from that, the installation also works at night with the light of the moon. 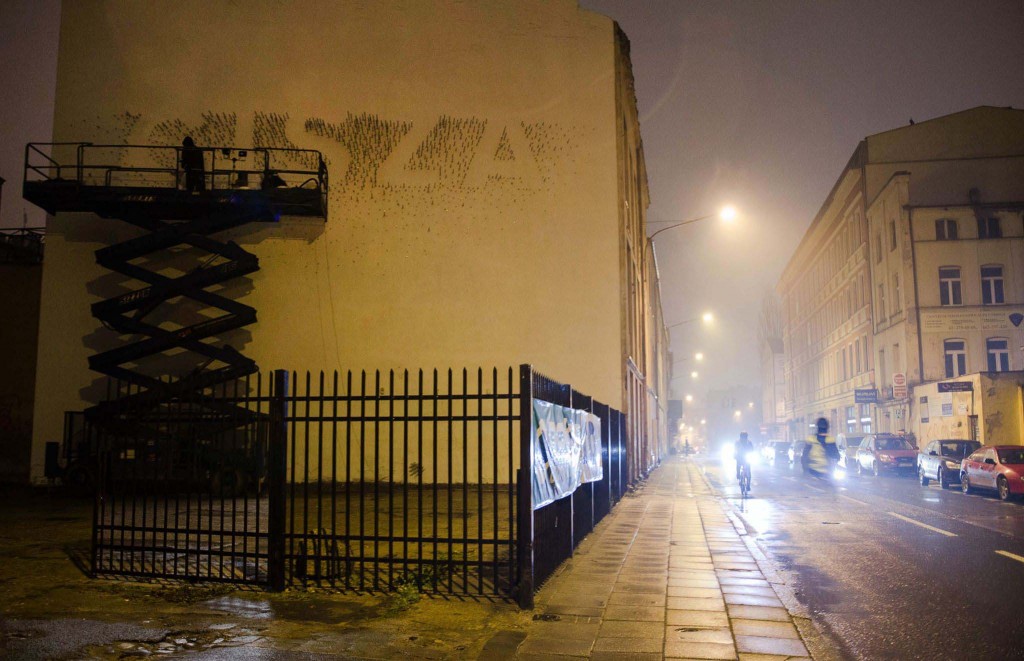 The author of the installation is Lukasz Berger – an artist from Wroclaw, also known as Cekas/Ceka100. He is a graduate of Sculpture Department of the Academy of Fine Arts in Wroclaw where he completed his diploma in the studio of Janusz Kucharski. An experimental artist working in different areas – graffiti, mural, sculpture, installation. 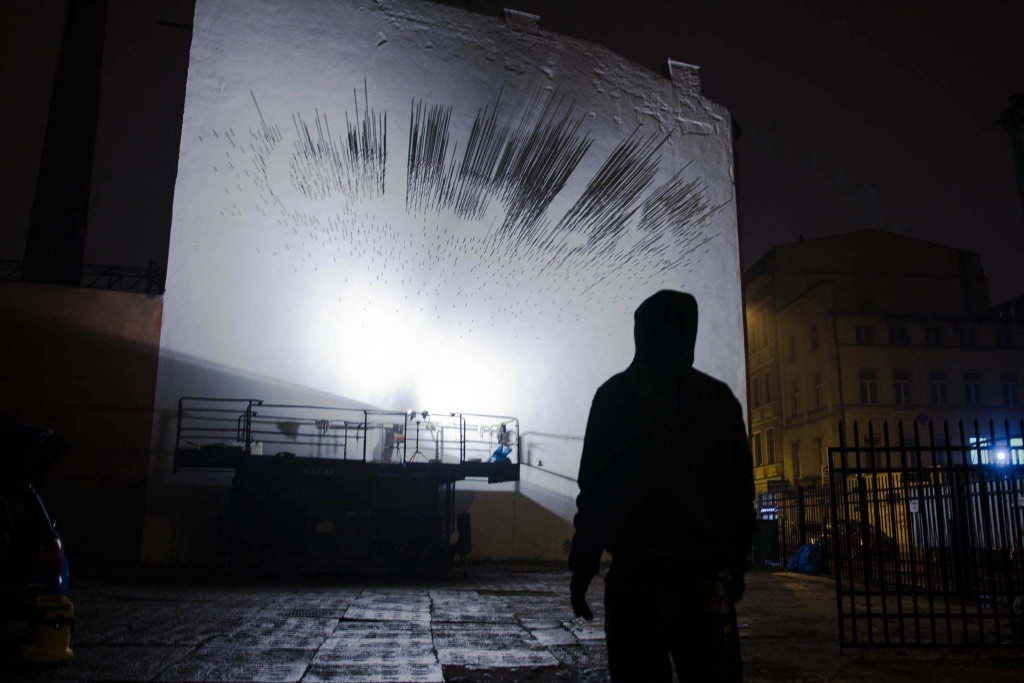 According to the artist:
“The installation is an answer to the communication between the modern man and the reality around him. The meaning of “silence” is very wide and the context of the work could be understood very individually, depending on the observer. The idea of the installation arose from the observation of the environment. People – in the city, on the internet, at work – are producing noise, which by time inaudible, is still present. It has influence on the quality of the emotions and thoughts which in the end are defining our actions”. 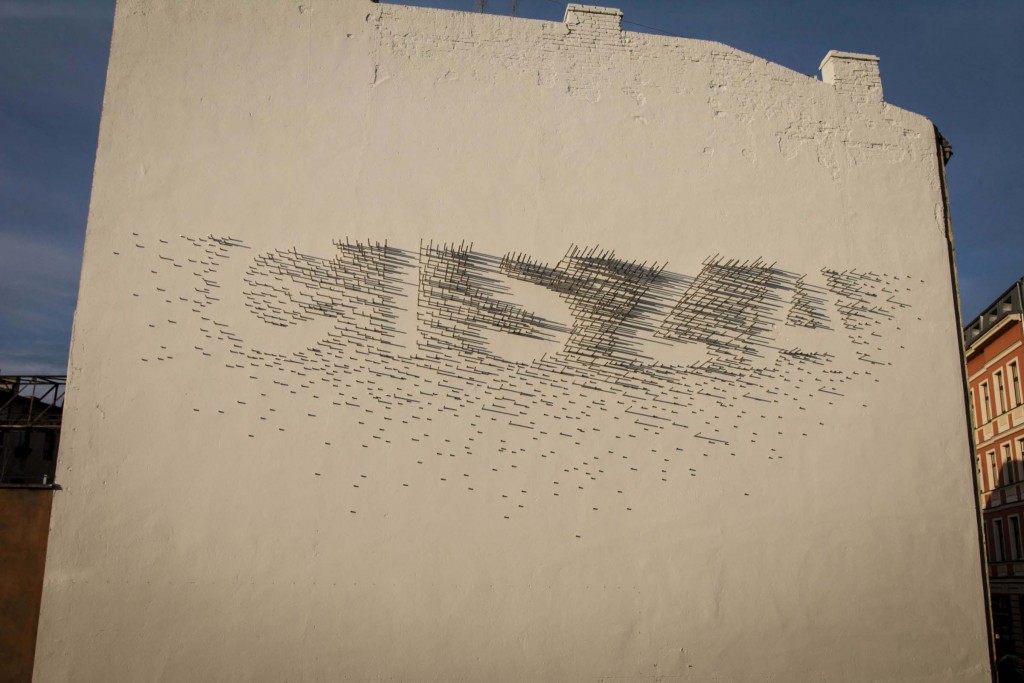 “For me personally this is a very meaningful realization. I guess that the aim which was accompanying our mural project from the beginning, is almost accomplished. Now, the whole gallery in Lodz consists of almost 50 walls with artists from all over the world and we can easily say that our public space is saturated with really great pieces. It’s high time to think about new things and start to extend the gallery with new objects, not necessarily related to the wall. I don’t want to say that we won’t organize any mural in the future, nevertheless, I would like to implement new things in Lodz’s urban tissue – modern sculptures and installations. What’s more, in the framework of my work in Lodz Event Centre, I want to renounce the festival form – I want to convert it more into an all year round public art programme. The “Silence” installation is – even if it is constantly fixed to the wall – a symbolic step forward, in both the content area and the pure, physical form of the artwork”. 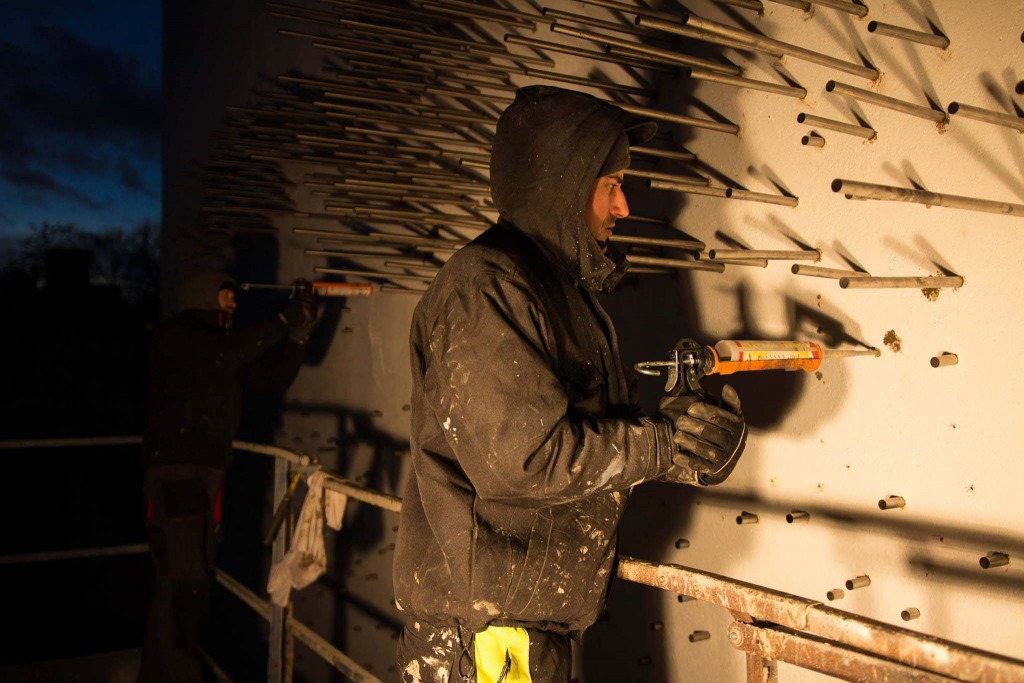 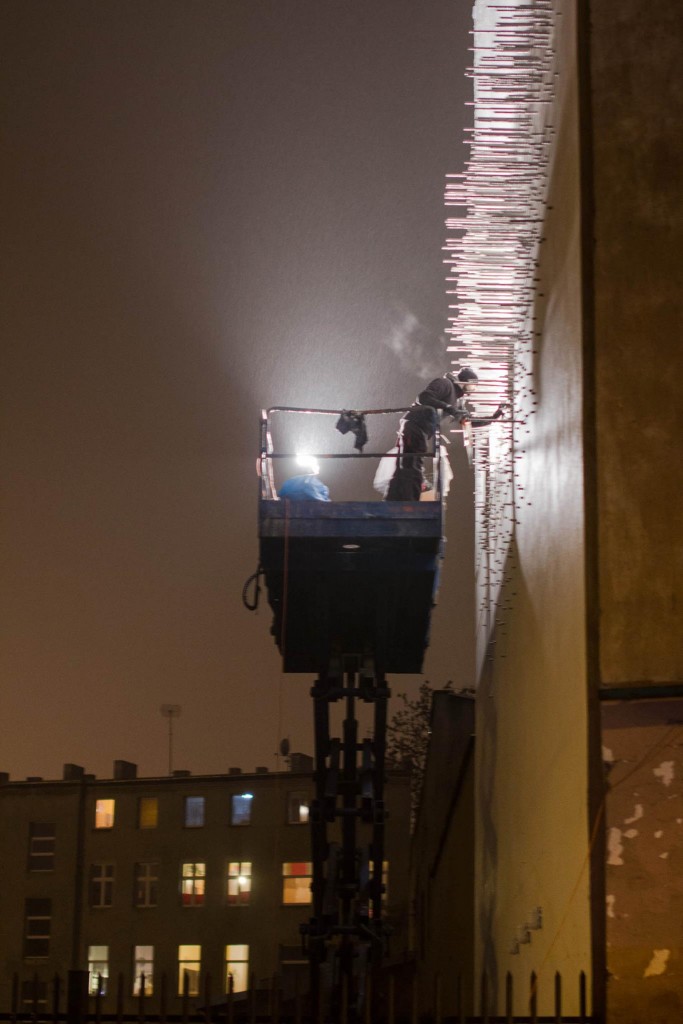