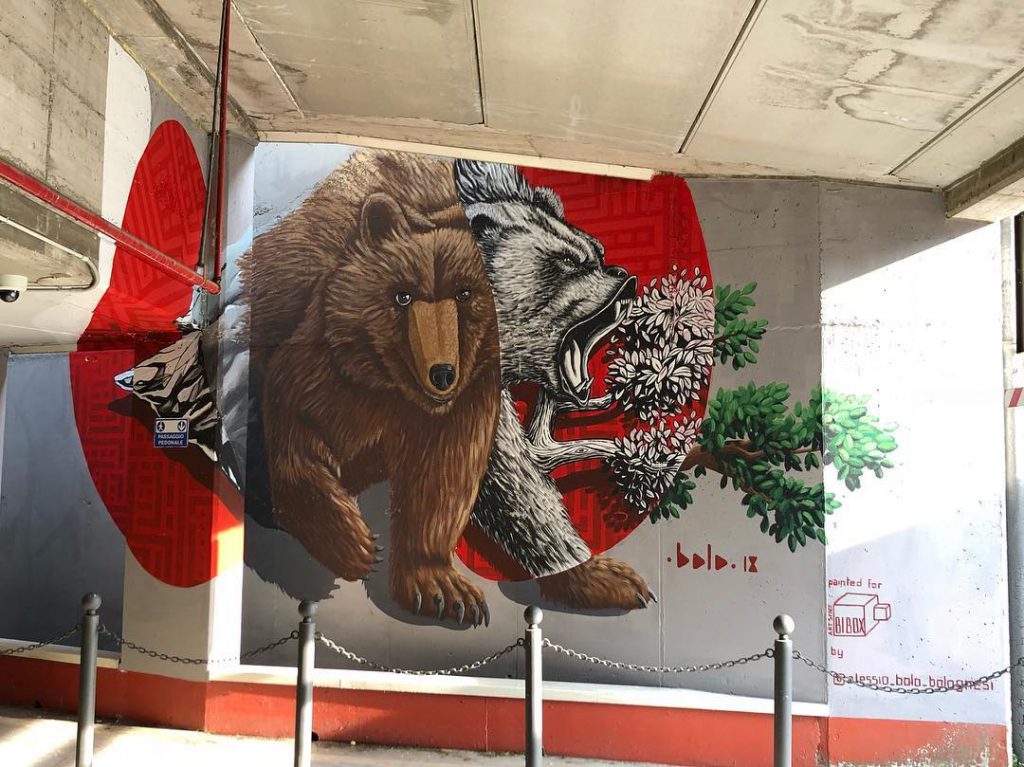 Alessio Bolognesi‘s latest street art project “I 4 elementi“, was painted at the Bellone parking lot. It was curated by Irene Finiguerra of BI-BOx Art Space for BAU – Biella Arte Urbana.

BAU is a project by Fabrizio Lava (StileLibero), with the contribution of Città di Biella and Fondazione CRBiella, in collaboration with Il Polo Culturale di Biella Piazzo. 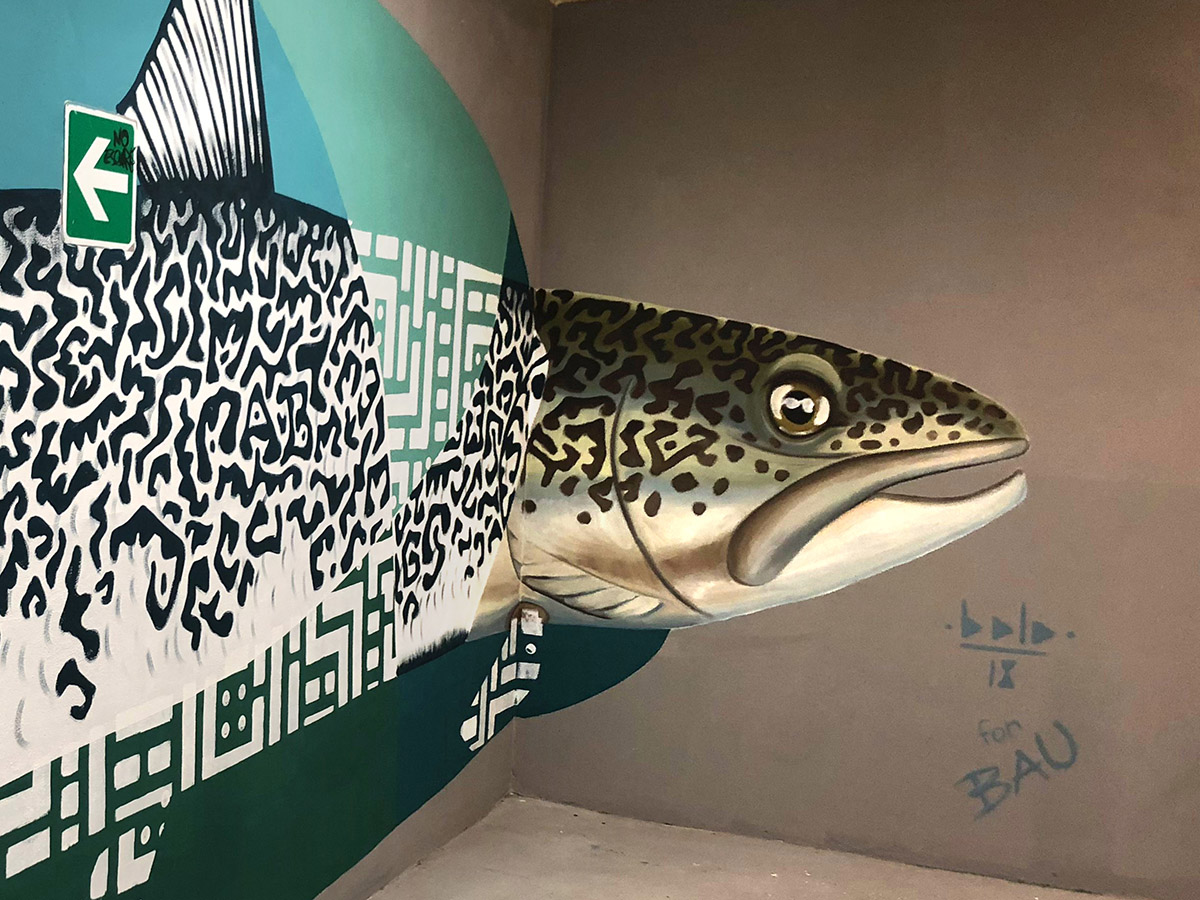 Street art is very fashionable and catchy media. But it’s not just this. It is art without boundaries, without the constraints of a museum and of a space “used for”. Alessio Bolognesi with his work developed in four parts , played with elements and symbols of Biella city. Alessio has transformed the surface of an anonymous space of passage, such as the Bellone parking lot, in an open air gallery which all people reaching the ancient top of the city can visit.

He did it with skill, intelligence and respect for the City, paying homage through its symbols and strengths. The works of Alessio Bolognesi for BAU – Biella Arte Urbana become an instrument of propaganda for the territory. Like a virus, it uses the road and the hidden spaces of Biella Piazzo to exalt some vital elements of Biella and its territory.

Thanks to his intervention, he has stifled the horror vacui of the parking lot, transforming an urban situation into a work of art that can be enjoyed by everyone. He thus triggered an artist-user dialogue in a two-way interaction, first luring him with the bright colors of the backgrounds and then proposing a reflection on the territory and its peculiarities.

After looking for historical references related to the city, the artist decided to focus on the animal symbol of Biella, the subject of the city coat of arms: the bear, together with the beech, the territory’s plant. The bear is represented both in the docile version and in a more aggressive one, an attitude that the animal usually plays when it has to defend the little ones or if it is attacked.

The bear is a symbol of courage and in its frontal shape its back has the profile of the mountains of Biella, with the Mucrone and the nearby peaks. In the intervention at the entrance to the parking lot the bear seems to come out from behind the pillars that hide part of the wall. The overall tones of the figures are warm and soft.

The beach in the mural at the entrance is partly hidden by the imposing bear, as if the animal wanted to defend it, then the tree develops with leaves and branches in the various zones of access to the elevators on the floors, with colors from brown, green to the tones of water which is the lifeblood of the plant and of nature.

THE THREE FLOORS OF THE LIFT COMPARTMENT OF THE BELLONE PARKING

Plan 0: EARTH. The rose of the Gromo Losa garden / the Pink Garden Club Biella.
Il Piazzo has become an increasingly magical place with the Italian garden of Palazzo Gromo Losa, with the scent and the colors of the roses that embellish the paths and the flower beds, but the Biella area has recently also its rose: the rose Garden Club Biella , a climber with excellent scent and resistance to cold.

Alessio Bolognesi wanted to pay homage to these excellences with the creation of large roses with intense and evocative colors, to which only the scent is missing. 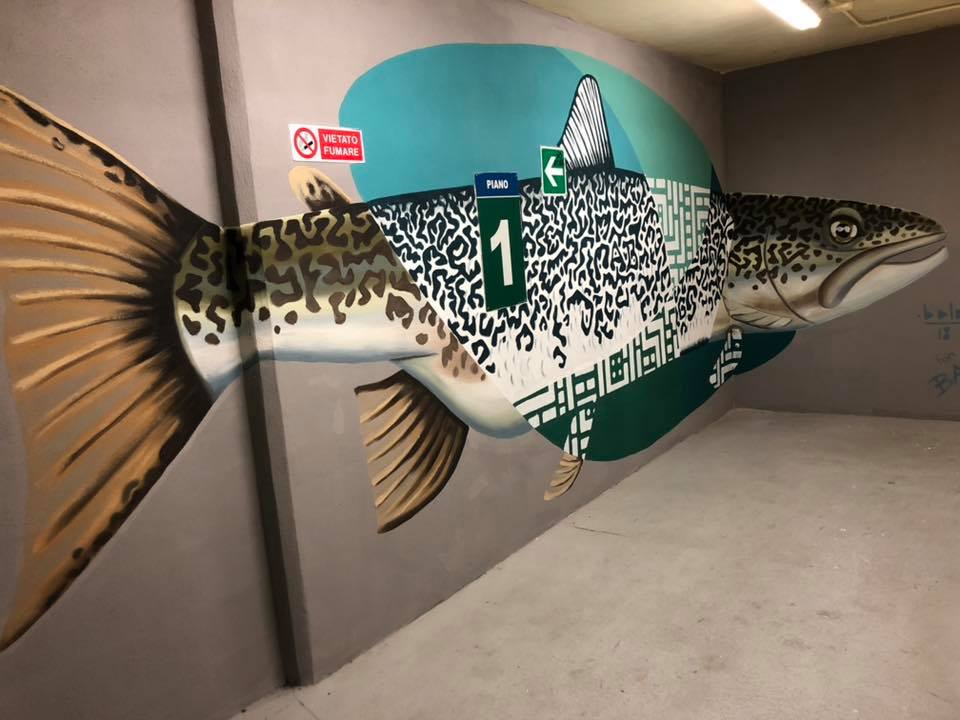 Floor 1: WATER. A large marble trout from Sesia and Lago Maggiore, but also present in our waters, develops in the area facing the lift on the first floor, to evoke the Biella water, excellence for its quality and engine of so much industry in the past. 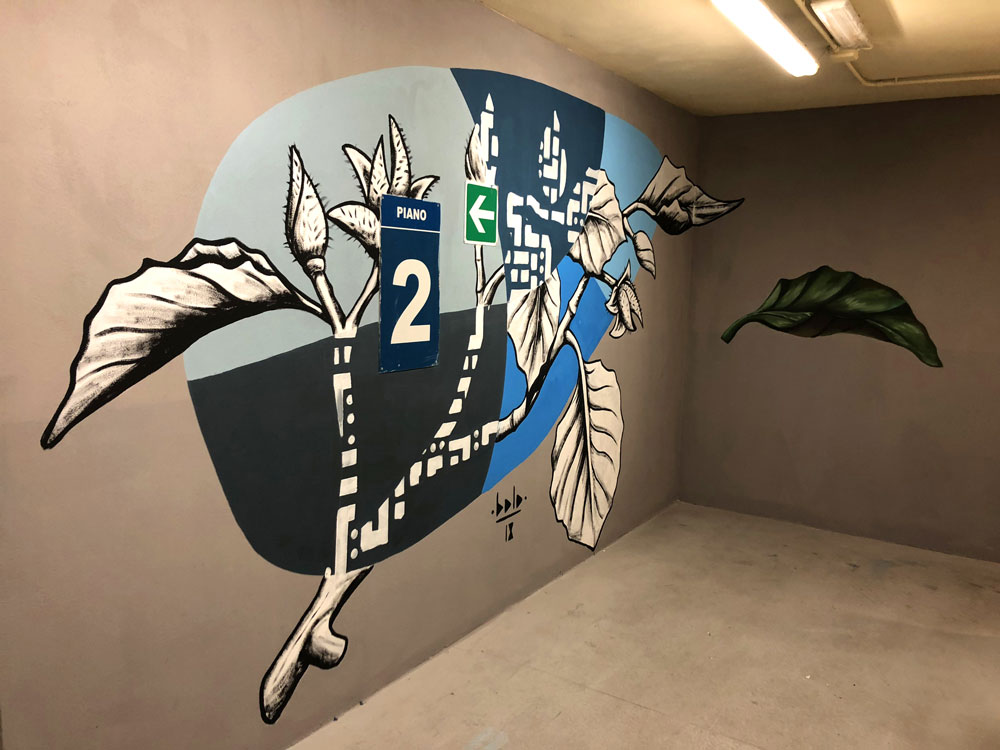 Floor 2: AIR. The top of a beach, a very widespread tree in the Biella territory and which appears in the city’s coat of arms, stands out in the blue of the sky, almost moved by a light breeze. The heraldic meaning of this plant in the emblem is a symbol of resistance against the passions, symbol of sober and withdrawn life.