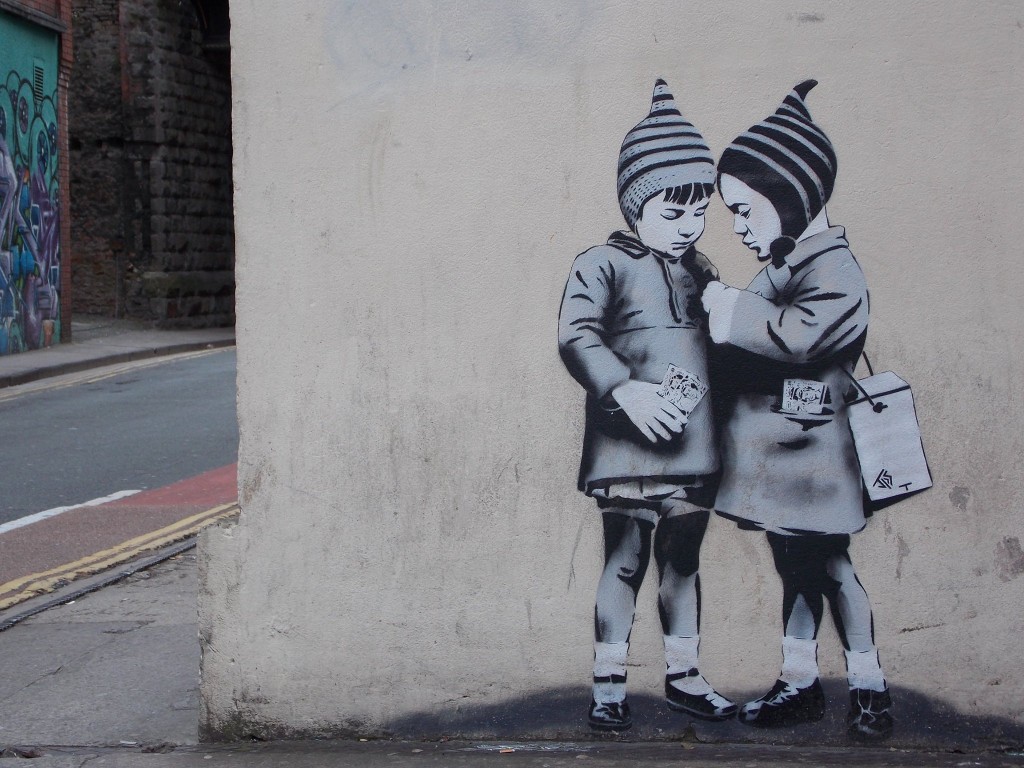 Despite being the capital town of graffiti and street art, the Bristol scene is pretty local: graffiti hunting through the streets of Bristol allowed me to dig into the UK’s street art scene, which I barely knew before moving to Bristol – perhaps because the stencil superstar is so popular to keep everyone else in his shadow. However, Banksy definitely tossed the city into the international circuit of street art and, nowadays, street artists keep coming from all over the world to paint on the walls of Bristol.

A huge role in attracting internationally renowned street artists is played by the excellent UPFEST, the biggest urban art festival in Europe –which takes place in the neighbourhood of Bedminster. Upfest is one of my favourite street art festivals ever, but here I’ve deliberately avoided mentioning some –albeit great- street artists who were in Bristol just for Upfest, as their murals are painted over every year. 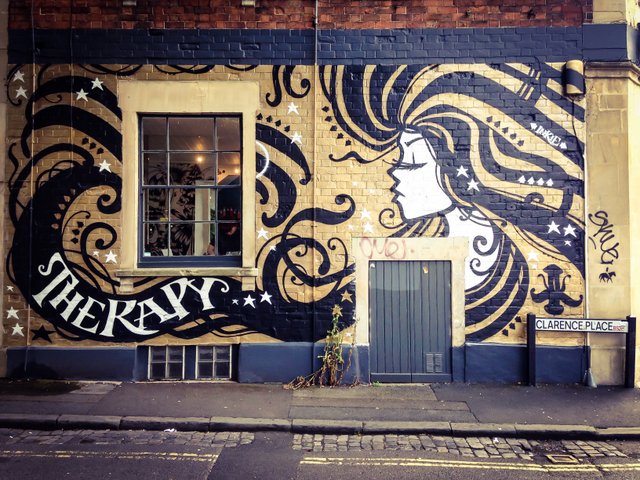 In his hometown of Bristol, Inkie is as much a legend as Banksy, with whom he began hitting the streets back in the 1980s. His style is a mix of graffiti and figurative imagery, often inspired by art-nouveau, tattoo art, Mayan architecture and Islamic geometry. 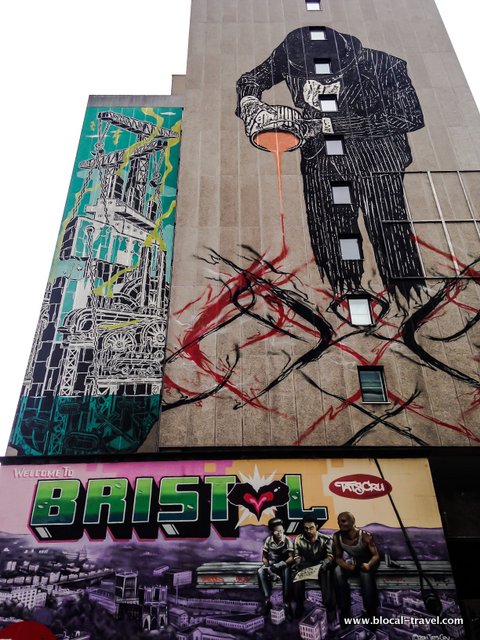 In his hometown, the legendary Nick Walker painted what quickly became a landmark of Bristol: ‘The Vandal’ is a banker-like figure dropping some paint on the city at his feet (although the feet of the subject are not depicted). Speaking against the financial crisis, his ‘Vandal Character’ storyline spread all over the world, from Stavanger to New York City.

In this picture, you can also see the neighbouring wall by the Polish stencil artist M-City and the piece by the legendary New York crew TATS. All that -and even more- can be found on Nelson Street, which was the location of “See no Evil” -Bristol’s first street art festival, which took place back in 2011-2012 and was organised by the legendary street artist Inkie. 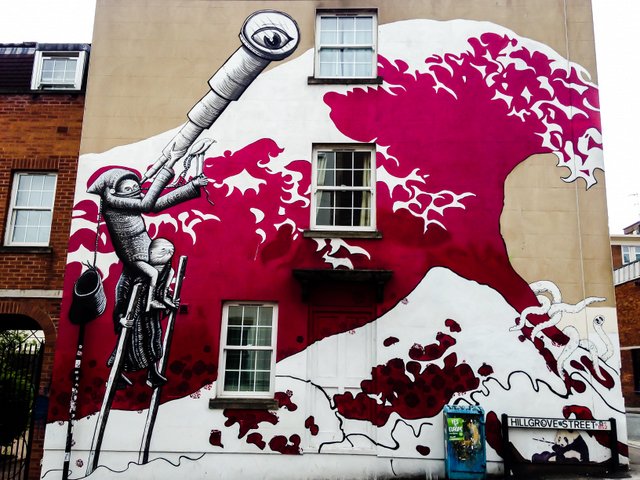 Affectionately nicknamed ‘Tsunami’ by the Stokes Croft residents, this piece is actually a combination of works by different artists overpainting each other. Phlegm originally painted on this house in Stokes Croft in 2008 but, in 2009, the crew MM13 covered his piece with this huge, bright-red wave. Then Phlegm came back in July 2009 to add his trademark characters to the wave. 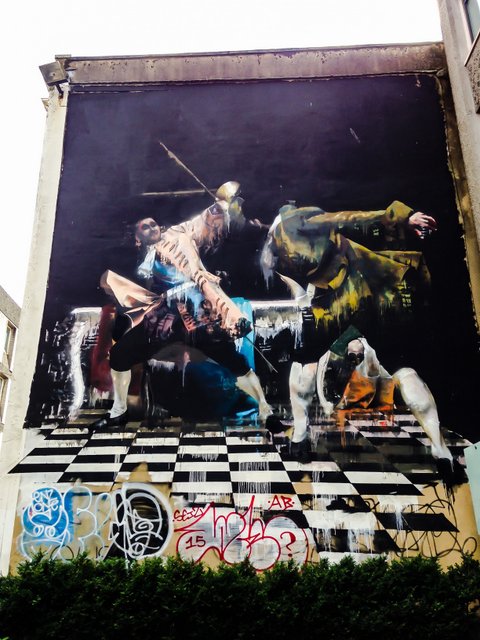 Connor is originally from Ireland, but he moved to the UK to study Fine Art in London. This piece titled ‘The duel of Bristol’ was painted during the ‘See no evil’ festival in 2012. His style is inspired by old master oil paintings, but his technique is pretty unique: he uses realistic images of people, with some parts of their bodies depicted and others left obscured, all along incorporating abstract elements and sharp lines. He also uses solvents to finish his works with a mesmerising effect. The colour palette is usually dark, as is the message of his paintings. 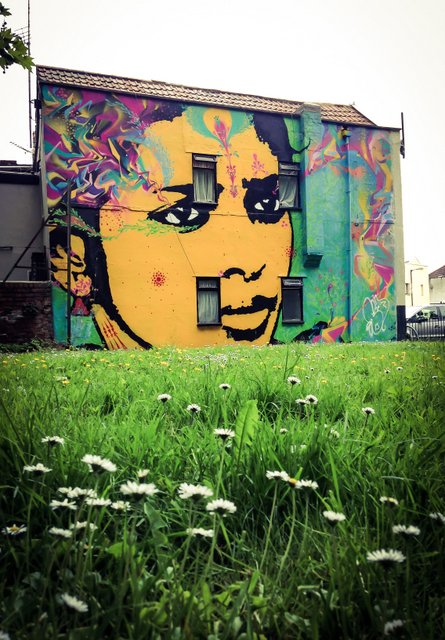 Bringing Bogota to Bristol, his colourful, one-layer stencilled portraits on vibrant abstract backgrounds are now among the most popular murals in the city. The first one was painted in 2012; it depicts an African girl and it quickly became the landmark of the hipster neighbourhood of Stokes Croft, generating an overabundance of t-shirts and other stuff. The second, titled ‘Taj Mahal Girl’ and depicting an Indian girl, was painted in 2015 on Mina Road. 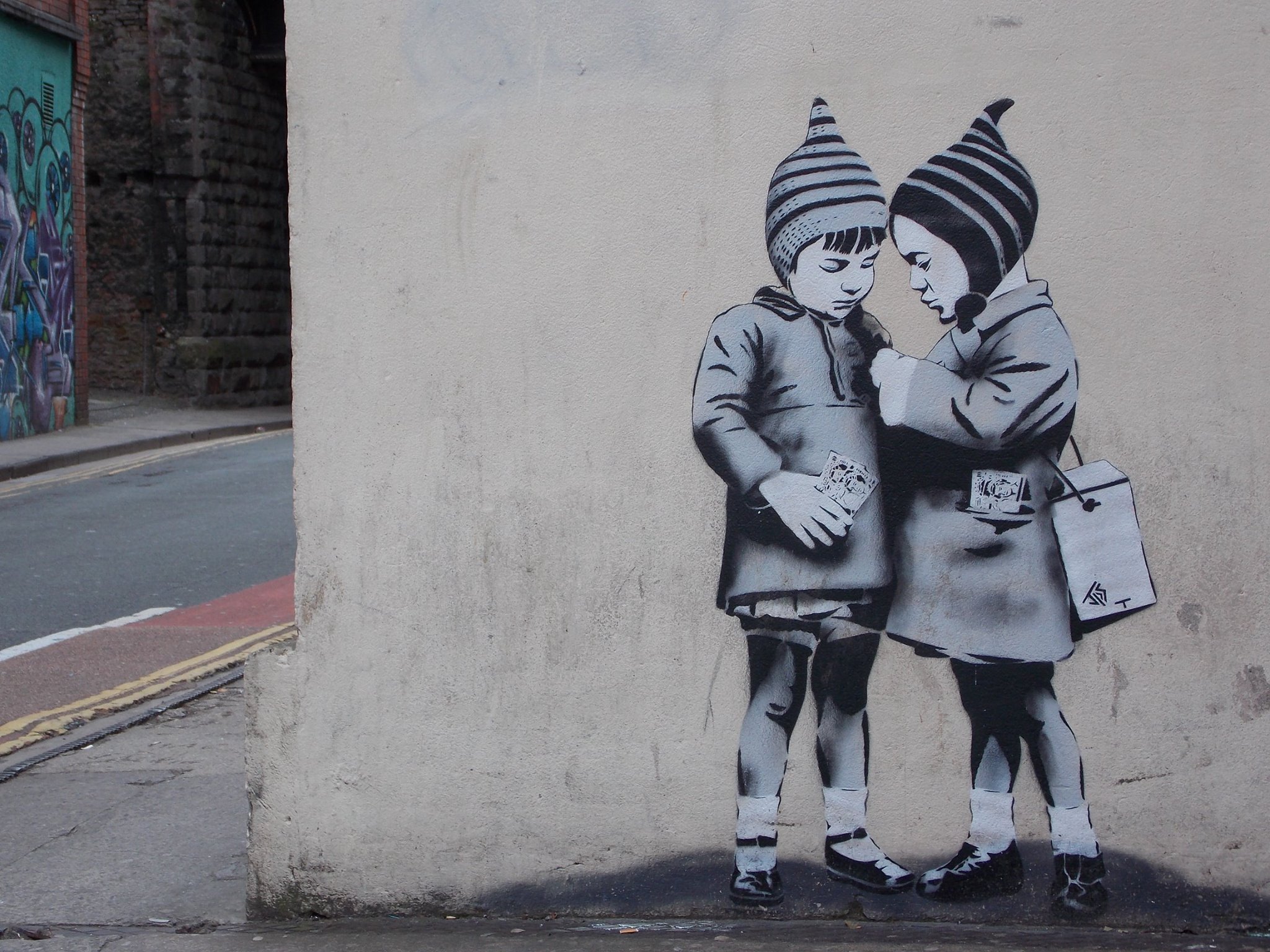 Bristol is full of JPS’s stencils! My favourites are Spartacus and the thought-provoking ‘The big deal’, which depicts two cute kids dealing in money. JPS was hugely influenced by Banksy, but he eventually moved on developing a more detailed style of stencilling. 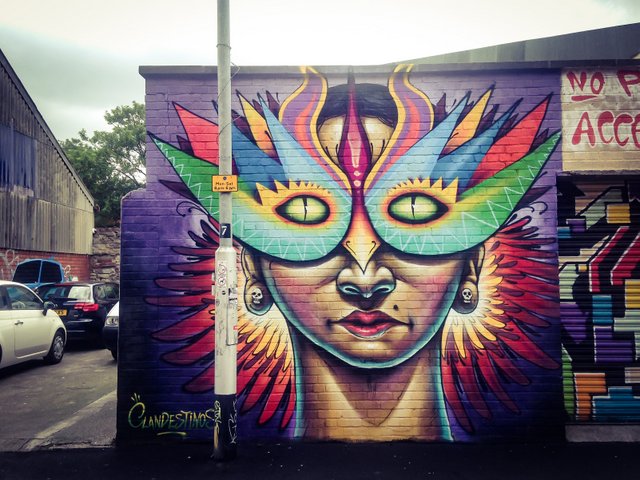 This artistic husband-and-wife duo composed of Shalack Attack and Bruno Smoky painted an amazing piece in Stokes Croft depicting a vibrant masked face. Influenced by their Latin American heritage, this piece brings a Carnival vibe through the rainy alleys of Bristol. I especially love the detail of the snake eyes, which introduces their iconic ‘spiritual animal’ theme into the picture. 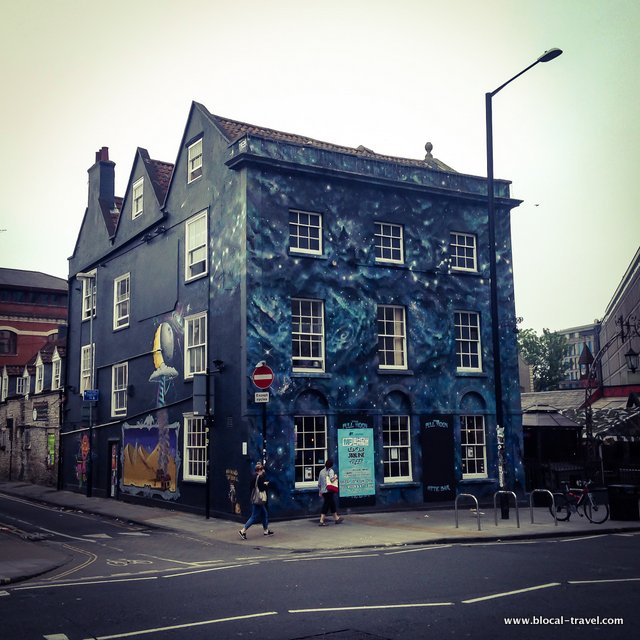 His space scenarios are scattered all around Bristol, but undoubtedly the most famous is the one covering the whole block of the ‘Full Moon’ pub in Stokes Croft. His inspiration comes from Hubble Telescope photos and materialises into abstract representations of nebulas and star clusters 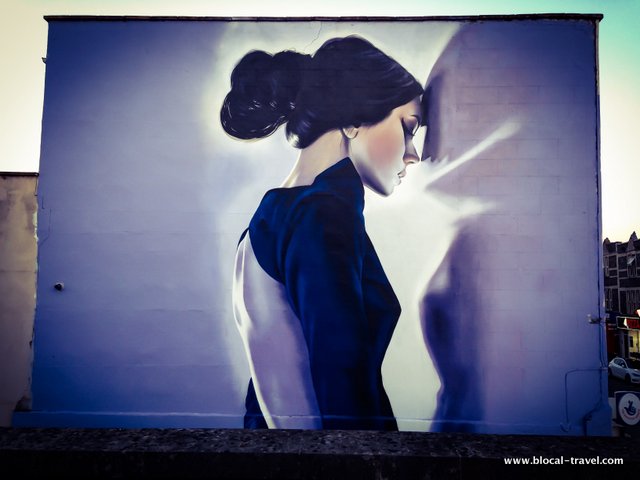 Jody began spray-painting at the age of 15 at the ‘infamous’ Barton Hill Youth Club, which is where most of Bristol’s street artists started out. He came back with his freehand, photorealistic pieces after an 18-year hiatus and now his graffiti-inspired early pieces are scattered all around Bristol. 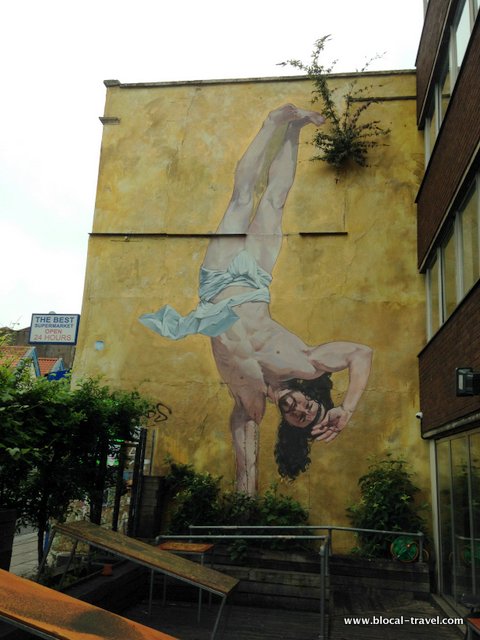 His ‘breakdancing Jesus’, which he painted three years ago in the courtyard of The Canteen, is among the most iconic murals in Bristol. It is part of a series of breakdancing Jesuses, which he began in 2004 after the Pope had acclaimed a Polish breakdancing group. Massive and glittering, this huge mural marked his comeback after a 12-year-long break from art.

Check out my Bristol Street Art Guide for more: http://www.blocal-travel.com/world/uk/bristol/bristol-street-art-guide/