Since April 30th, observers have had the chance to marvel at the high-rise building façade completed by artists Francisco Bosoletti and Young Jarus at Wassertorstraße 65. And for photographers, there’s a surprise in store. 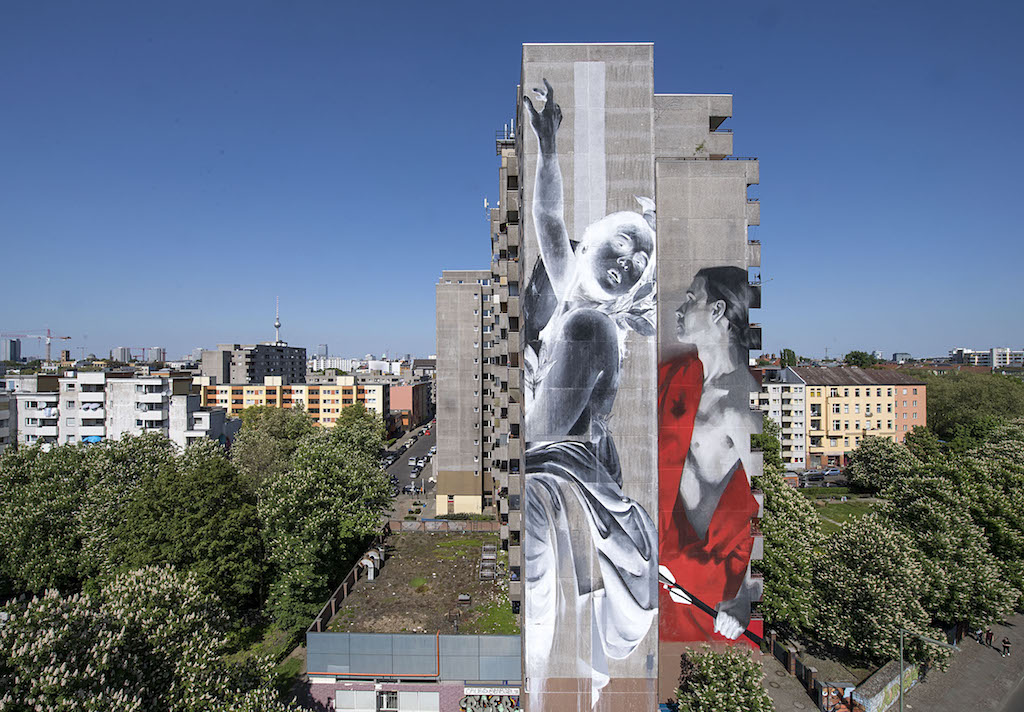 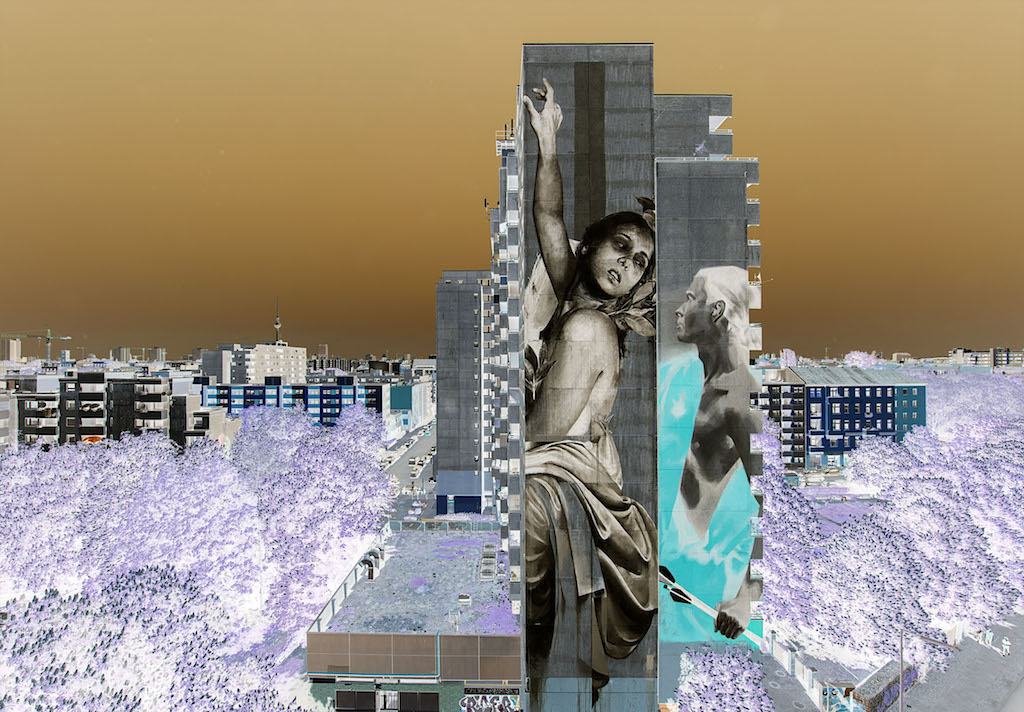 Between April 14th to 30th there was a one-of-a-kind collaboration, at a lofty height; the street artists Francisco Bosoletti and Young Jarus worked together on a work of art that was modeled after the Greek myth surrounding Daphne and Apollo:

Out of rage for Apollo’s mockery, Eros, the God of Love, shot a golden arrow at him so that he would fall in eternal love with Daphne. But this arrow was made of lead so that Daphne would never return the love of Apollo. Once Apollo’s harassment and courtship of Daphne became unbearable, she fled and asked her father – Peneus – to change her appearance. He then transformed her into a laurel tree, which from then on would become sacred to Apollo. In memory of Daphne, he would henceforth wear a laurel wreath or a cithara decorated in laurel leaves.

In his artistic execution, Bosoletti portrayed Daphne in a negative light; Jarus lets Apollo appear in a positive light. This portrayal of unfulfilled love holds a secret: The transformation of Daphne, the moment of her dissolution as a person can be retraced by the observer with the help of their own cell phone or camera. If the work of art is photographed using a color reversal function or edited afterwards, the inversely portrayed Daphne is shown in a natural color spectrum. 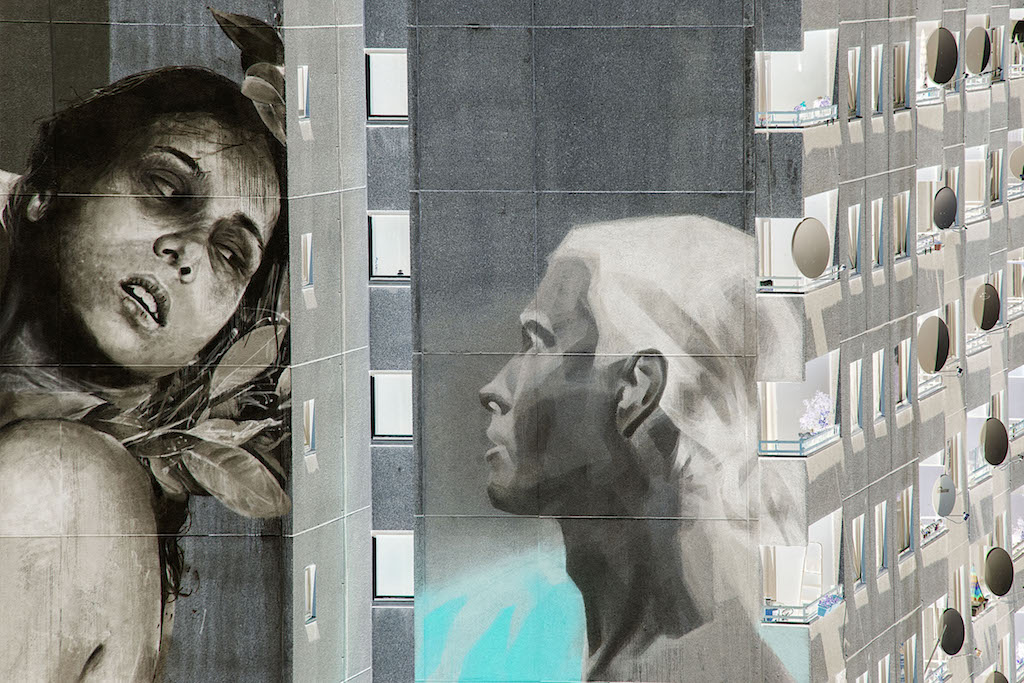 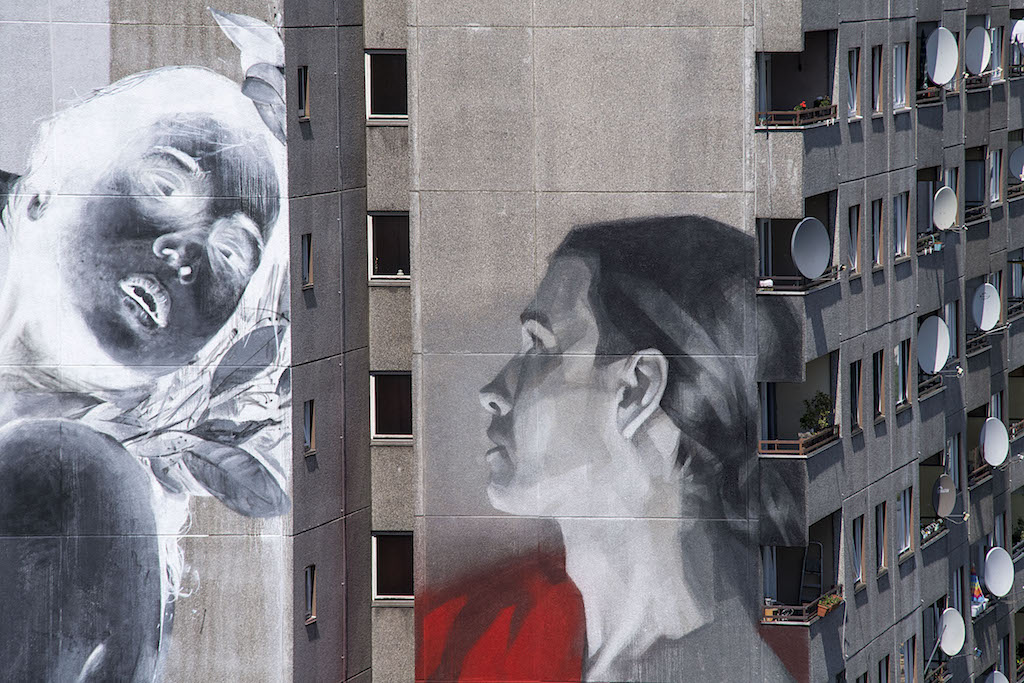 About the project series “One Wall”:

According to the One-Wall series’ motto “One wall, one message”, internationally renowned and emerging artists design the facades of buildings in public locations around Berlin. “One Wall” is initiated by the URBAN NATION Museum, which under the artistic leadership of Yasha Young regularly invites the greats from the national and international street-art scene to Berlin. In this way, the face of the city is permanently changed through urban art. Every “One Wall” delivers an artistic position: The artists get to know the wall’s surroundings and then create an individual piece accordingly. 27 One Walls from internationally renowned artists like Onur & Wes21 (Switzerland), Don John (Denmark), Shepard Fairey (USA), HERAKUT (Germany), Phlegm (Great Britain), Li Hill (Canada) and Pixel Pancho (Italy) have already been created. “The One Wall Project is a very important component of the work at URBAN NATION,” according to Yasha Young. “After all, 75 percent of our art can be found in the streets. The remaining 25 percent is archived and exhibited in the museum.”