For this project he transformed an 18m bus into a giant cardboard box with two contrasting scenes either side: order and chaos. As the public enter and exit the bus on one side they can see a relatively serene scene – on the other side the bus is depicted fully in motion, with the same characters clinging on for the ride! 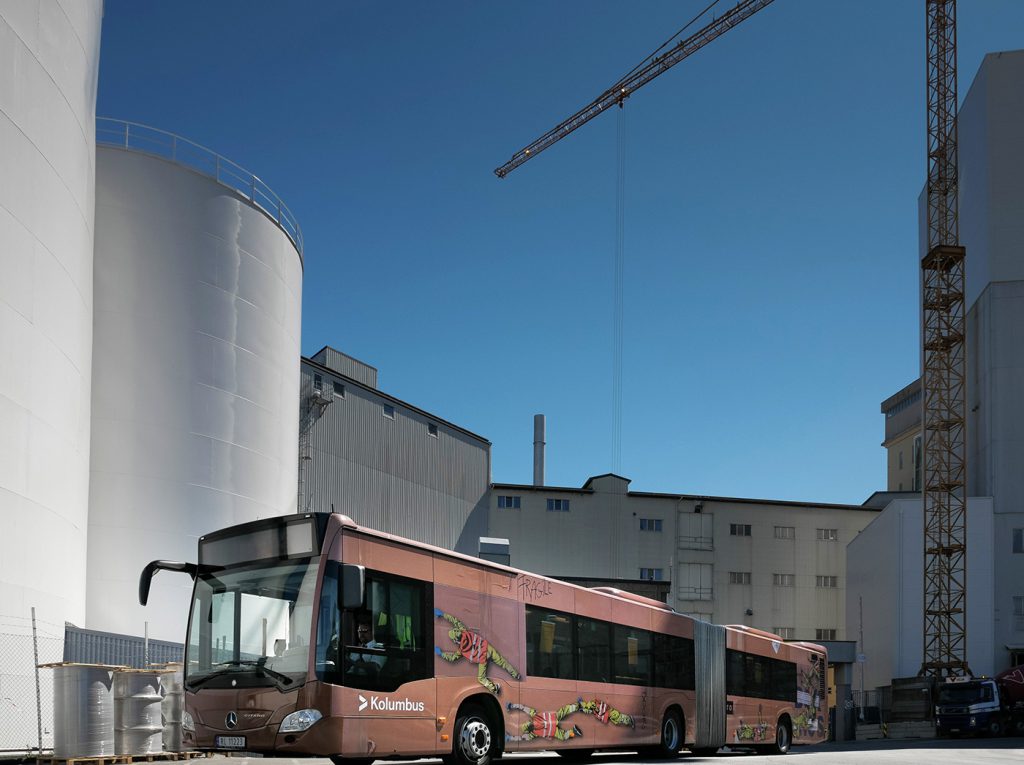 “It’s not the first time I’ve made human scale characters but it is the first time that I’ve scaled up some of my stencils from 1:5 to life size, which was necessary due to the size and speed at which this canvas will be moving! In the same way that the scale of advertising ensures you can read it driving by in 1 second, this is the same principle…except you’re not moving, the canvas is.

I started by recreating the shape of the bus to scale with cardboard boxes and made my sketch directly on top. I decided to keep the background to keep this link with the idea of moving goods and delivering objects. These boxes are the most commonly used container for all types of objects and are used by everyone at some point or another – in the same way public transport should be.”

Stavanger’s Street Art buses are the result of a three-year collaboration between Nuart Festival and regional bus company Kolumbus that began in 2016. Other artists who have taken buses as their canvas include Ampparito (ES), M-city (PL), Add Fuel (PT), Ernest Zacharevic (LT), Martin Whatson and Hama Woods (NO).

“Street Art has a long and venerable tradition of making visible the invisible” said James Finucane, General Manager at Nuart Festival. “It acts as an outlet for people who for one reason or another become marginalized from day to day life in the city, and Jaune’s story is the perfect example of how street art can empower individual’s to take ownership of their urban environment. We hope that people will enjoy seeing Jaune’s bus rolling through Stavanger’s streets and, if nothing else, that it puts a smile on people’s faces.”

Grethe Skundberg, press spokesperson for Kolumbus, said: “We want to make leaving your car at home an attractive choice. Putting art on buses can help make mass transport a bit more exciting. Nuart adds spice to our daily commuters’ lives and I think the cooperation between Nuart and Kolumbus is appreciated by our customers and citizens, they’re certainly enjoying Jaune’s latest design!”