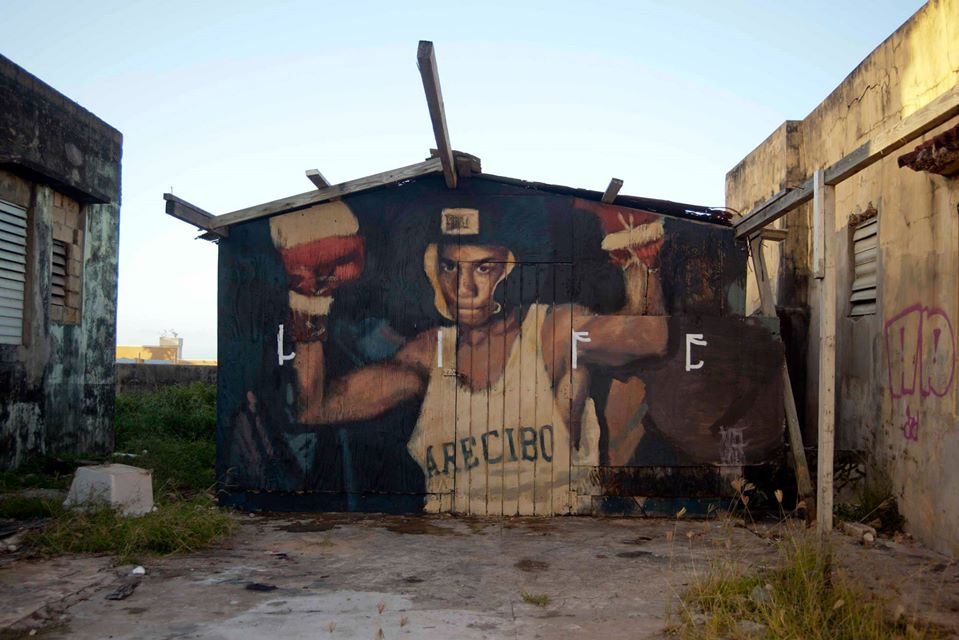 This wall has been titled “LIFE” by AXEL VOID , and is a part  of the “Mediocre” series. It was organised by the Arecibo Street Art Project by Biksimo, in Puerto Rico. An emblymatic art creation that hides more than meets the eye.
Video by Tostfilms
As AxelVoid put it in words himself:
“This wall is part of the “Mediocre” series. It’s an old photo that is hanging on the wall of a gym of the town. Arecibo is a small town on the north coast of the island. In the past years the states built shopping centers around the area. This closed all the small businesses of the area and forced people to leave the town because there were no more job opportunities. Now the town is practically a ghost town with a very beautiful and strong feeling of home from those who still remain there. It is surrounded by water with the sea on one side and a large river on the other and a beautiful reminiscent mix of architecture. I felt like the boxer represents a similar feeling, the local hero that at the moment gained popularity and perhaps signified pride but with time is forgotten and remains in the memory of some photo hanging on the wall.
https://vimeo.com/117982376
Special thanks to Fernando Marquez , Bik Ismo, Petrosky, Natalia Lassalle and Tost Films for their support and the people of Arecibo for their hospitality.”
Credits:
Artist: Axel Void
http://axelvoid.com
Tostfilms:
www.tostfilms.com
Arecibo Street Art Project by Biksimo
www.facebook.com/arecibostreetart
Location:
Arecibo, Puerto Rico