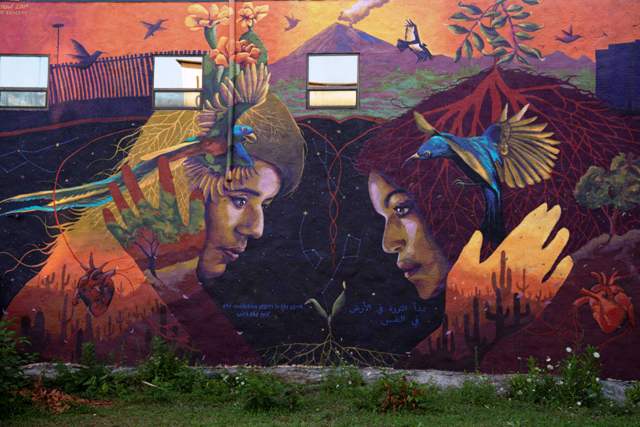 The Avenue Concept, the Providence-based nonprofit that nurtures and supports public art ecosystems, recently completed three new installments in its acclaimed mural project. A large-scale mural by nationally-renowned artist and RISD alumnus Jess X. Snow was installed in the Providence’s West End, and two new works were created on both sides of the historic Providence National Bank façade by New England-based artists AGONZA and M.deangelo.

The Avenue Concept’s citywide mural program has both showcased local talent and brought internationally-renowned artists to Providence since 2015. The works have drawn local acclaim and coverage from national and international art media. Some – including one from Polish street artist BEZT and another by Baltimore-based muralist Gaia, both located downtown – have become beloved local landmarks. A work by Austrian street artist NYCHOS on the Jones Moving & Storage building in Providence’s West End was recently featured in the 2019 coffee table book Mural Masters: A New Generation. 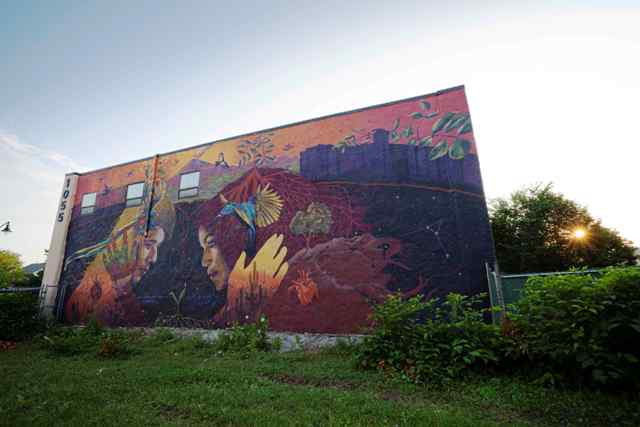 The newest additions to the program continue its tradition of placing high-quality, compelling works in high-traffic public spaces.

Jess X. Snow, a former Providence resident, returned to the city to paint a mural on the exterior of Providence Community Acupuncture, located at 1055 Westminster Street, at the confluence of the city’s West End and Federal Hill neighborhoods. Snow is a queer, migrant, Asian-Canadian artist, filmmaker and poet, as well as a 2013 alumnus of the Rhode Island School of Design. Their murals and political graphics have appeared on buildings across the country and in the Los Angeles Times, PBS Newshour, the permanent collection of the Ford Foundation and the Library of Congress.

The new mural, “The Revolution Starts in the Earth, with the Self,” is a collaboration with Gavriel Cutipa-Zorn, a doctoral candidate in American studies at Yale and a 2012 graduate of Brown University. His research and dissertation provided the basis for the symbolism and mythology behind Snow’s visuals. The mural was also executed with assistance from Zoraida Ingles, Kah Yangni, Curtis Livingston, Dan Sway, and RISD alumni Jarrett Key and Peter Pa. The hand lettering was done by trans artist Ian Cozzens.

The mural features the silhouetted profiles of Providence-based Latinx organizer Vanessa Flores-Maldonado and New Orleans-based Palestinian organizer Amira. The concept is inspired by the struggles of both Latinx and Palestinian peoples at the borders between the United States and Mexico and Israel and Palestine. The design incorporates plant and animal life as symbols of the ways that solidarity can cross borders and break through walls.

It is also a homecoming of sorts for the two collaborators, as both cite their time in Providence as crucial formative years. Snow says that Providence is where they found their voice as an artist and began to write poetry about their immigrant experience. It is also where Cutipa-Zorn first developed his research about transnational solidarity and began organizing and raising awareness about these issues as a part of Brown Divest, which lead to his dissertation. 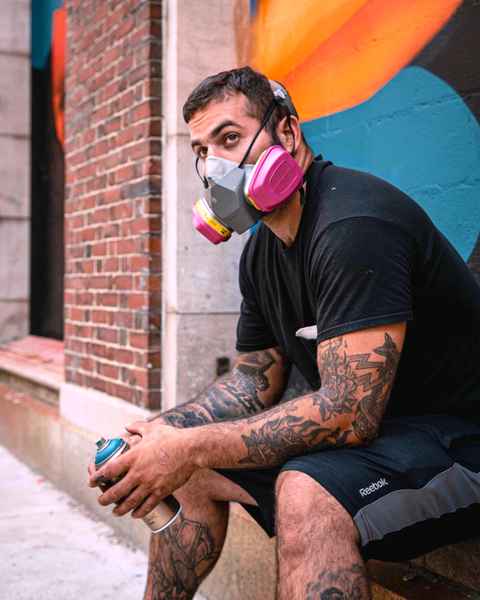 The other two murals, “Somnium” by M.deangelo and “Dear Urban Females…” by AGONZA, are part of The Avenue Concept’s revolving mural project at the Providence National Bank façade. The program was launched four years ago in partnership with Paolino Properties, which owns the building. Every year since 2016, the organization has commissioned an artist to paint a new work at the site, which remains on display for one year. This is the first year that two artists have been chosen to paint both the front and rear of the structure; the artists were chosen from an open call for proposals earlier this year.

M.deangelo is a Connecticut-based fine artist, illustrator and graffiti artist who has contributed work to juried shows at The New Haven Paint and Clay Club and Pequot Gallery. He was integral as both an artist and facilitator to New Haven’s Under 91 Project, the first mural allowed on Connecticut Department of Transportation property. M.deangelo’s mural treats the façade’s five separate panels as one unified canvas depicting a woman lying down against the backdrop of a nighttime landscape with a building at the far end. He refers to it a “cyclical composition” that connects three separate images of the same moment: the woman deep in thought, the reality of where she is (inside the building), and the unknown world beyond represented by the moon in the sky. 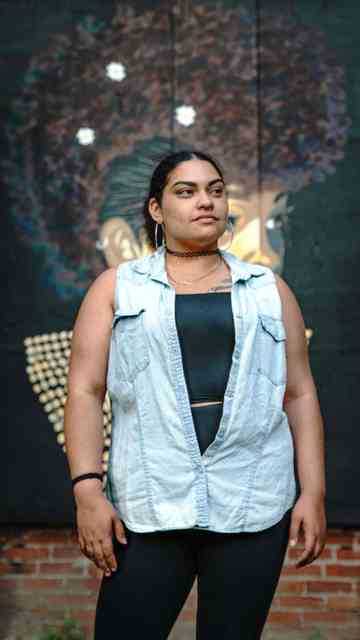 AGONZA (nee Angela Gonzalez) is a Providence native who spent her teenage years in the Dominican Republic before graduating from the University of Rhode Island in 2015. She has displayed work at shows in New York, Massachusetts and Rhode Island, and won 2017 and 2018 People’s Choice Awards at the Salem Mural Slam. In contrast to DeAngelo, her work on the rear of the façade discretely uses its five individual panels to depict four seemingly identical women. Their likenesses are based upon the artist herself, but each wears an earring with the flag of a different country that is represented among Providence’s diverse communities. The center panel combines the female symbol with a raised fist. AGONZA, who says her art is based on feminism, socialism and issues within urban communities, intends the piece as a tribute to the “strong, urban female” in a state with 32,000 more women than men.

“We are excited to once again use art to breathe new life into this historic part of the Providence landscape,” says Avenue Concept 2D Program Manager Nick Platzer. “Over the past few years this revolving mural project has helped to activate the streetscape around an otherwise inactive structure. By bringing new works to both sides, AGONZA and DeAngelo will bring rich new details to the visual tapestry of our city center.”