The Non Profit Organization, Art in Progress, is currently hosting some of the most important Greek and foreign street artists with international experience. This year’s festival is the 4th edition  and has already exceeded expectations!  The artists, leaving their marks, are decorating the city of Patras in the fourth edition of this very successful initiative by Art in Progress, NPO. So far 5 murals have been finished this month, so lets take a quick look into what has been done so far. 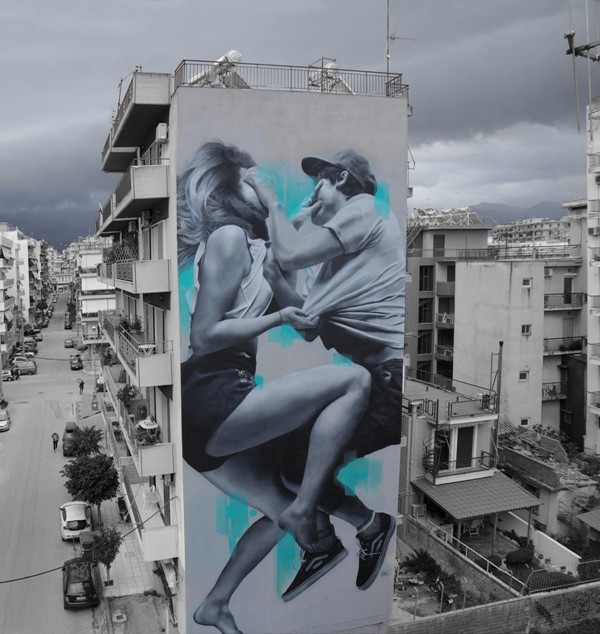 About JDL
JDL is 23 years old. She was born and raised in Amsterdam.
From the age of 15, she began to create her first artworks, which led
her to study Art and Design. Her studio is located on the east side of
Amsterdam, where she works when she does not paint “on the street”.
Although young, she already has gained a worldwide reputation as a
Street Artist with passion for realism and black and white designs. She
believes that art is a reflection of ourselves.
In 2017, she won the 1st Prize at the Street Art Awards 2018 Benelux
Edition, while in 2018 she was re-nominated for the same prize.
More information about JDL can be found on her official website: 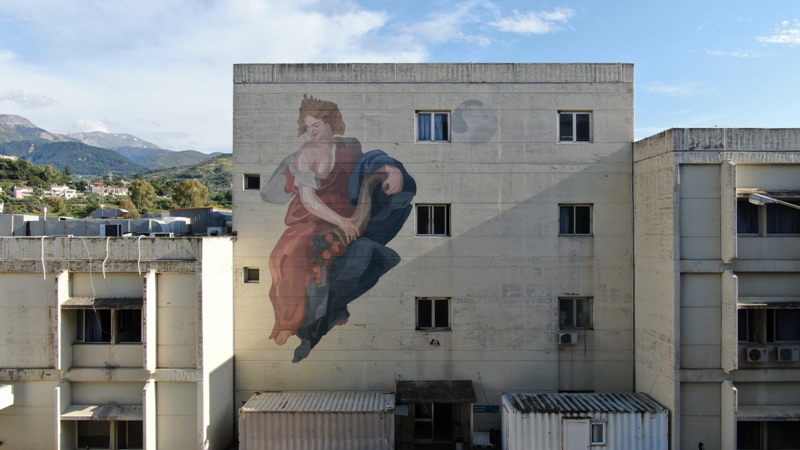 About Taquen
Taquen is a Spanish artist and illustrator who has dedicated himself to
murals over the last 8 years. His artistic headquarters are in Madrid.
Much of his work revolves around nature and the dialectic between the
minimalist elements he uses and the natural landscape, having the line
as the main element in his visual language.
Taquen started his exploration with graffiti at the age of 13, which
marked his life and his future. He always uses natural elements and has
recently begun to import non-human elements into his work, such as
plants and animals. It is very important for him to look at the
environment, to know the origin of things (and people) and to be
grateful for this exact source of life.
For Taquen, humanity has forgotten its origins, and this is believed to
be one of the main sources of the problems and failures it faces. A
quote from him:
“I admit that the mountains are part of my everyday life and I cannot
figure out who I am today if I do not mention it.”
More information about Taquen can be found on his official website:
https: //www.taquen.es/.

3. Kanari and Αgiou Andreou, Artist: AFK, Mural: For the eyes
of a child looking for land… 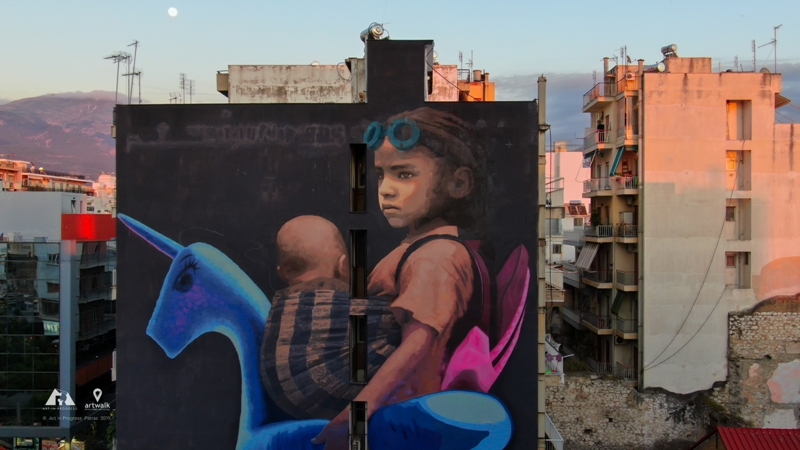 About AFK
The number of street artists is steadily rising and AFK (Away From
Keyboard) stands out among them. AFK is his alias.

He remains “anonymous”, but loves the relationship of the street art
with the public debate, as the messages of his art can communicate with
each one of us.

He is based in Bergen, Norway, but AFK’ s signature is on the walls of
Spain, Italy, the United Kingdom and France. His artistic career, his
technical skills, the impressive production of new works, his particular
style, are some of the elements that make him stand out as an artist.

His works have mostly social and political messages.

A quote from the artist:
“Do not let yourself be intimidated by the ugliness of the world.
Instead, look straight into the eyes. Understand its raison d’être. This
will make you stronger, with more ability and desire to do something
about it. ”

More information about AFK can be found on his official website:
https://afkstreetart.com/. 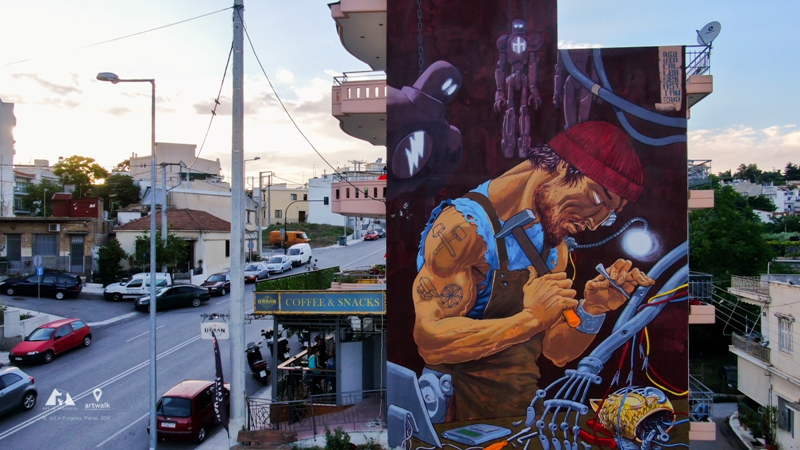 About a Squid called Sebastian
“A Squid called Sebastian” (ASCS) was born in Belmont, Massachusetts.
There, at a very young age, he first came into contact with the art of
graffiti. He was immediately fascinated by this form of art, although it
was literally non-existent in Belgium, where his family moved in 1989.
Nevertheless, he and his family traveled a lot and he was able to draw
inspiration from many classic Renaissance and surrealist masterpieces.
As a child and adolescent he always had a sketchbook and a pencil in his
hand. The figures that can be seen in his works are of a particular
style and character and look like they got out of a comic book.
After graduating with honors, he worked in the field of advertising for
2 years. This field didn’t satisfy him. So in 2010, he turned his back
on advertising and decided to focus on his own vision and inspiration.
In 2011, along with 2 musician friends, they organized a tour of art and
music all over Europe. The tour, 9000miles, was addressed to artists and
musicians of each city they were passing through.
Since then, he has been selected for 5 group exhibitions and murals in
10 different countries. He has created many in Miami and took part in
the creation of the largest mural of Canada, at Montreal.
More information about a Squid called Sebastian, you can find on his
official website: http://www.asquidcalledsebastian.com/. 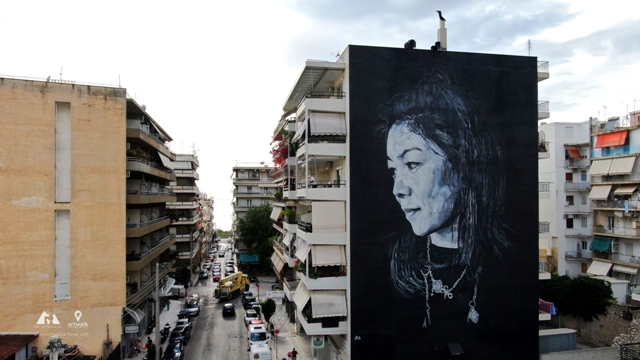 About ecb
Hendrik Beikirch, also known as ECB, is a street artist born in 1974 in
Kassel, Germany, and his is based in the city of Koblenz between Bonn
and Frankfurt.
He is a graduate of the Koblenz School of Fine Arts and he is well known
for his large paintings on public walls. ECB has created monumental
murals across Europe, the US, Canada, Australia, Asia and South America.
Each one of ECB’s figures has a story to tell us. In his works, the
passerby can meet genuine single characters, who are becoming more and
more exciting through their anonymity. The limited color palette and the
striking contrasts, that characterize his portraits, highlight the
sensitivity of his subjects, while the scale of these works invites
viewers to examine the relationship between the individual and society,
the viewer and the subject. His murals are not only interventions in the
urban landscape. They are our silent comrades in the city.
His subject matter comes from the imagination of the artist, while his
portraits do not conform to human proportions but are usually distorted
and fragmented, challenging the conventions of the rules for their
creation.
More information about ECB can be found on his official website:
http://hendrikbeikirch.com/

The artists that are still planned to create the rest of this year’s wall murals in the city of Patras are Bumblebeelovesyou, Gera 1, KLE, Mike Makatron and Millo. 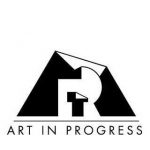