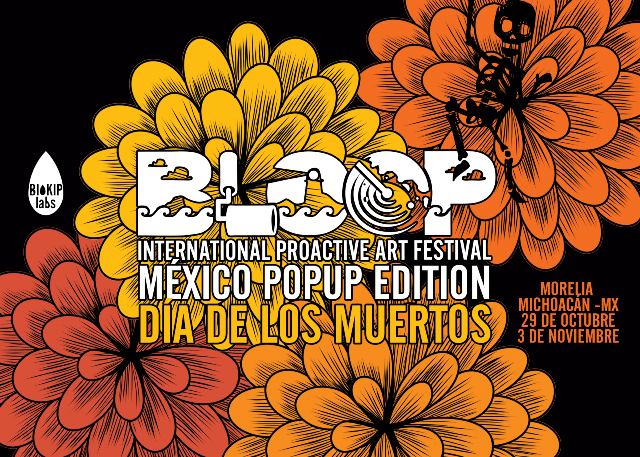 The very first pop- up BLOOP International Proactive Art Festival closed curtains at Plaza San Agustín located in the heart of Morelia where open air exhibition “THE ALTER” for the Día de los Muertos took place. This completely free, independent and self-financed avant-garde project continues to spread inclusive and accessible art to everybody since 2011.

Originally from Ibiza, Spain, BLOOP is organized by Biokip Labs, a small creative studio based in Italy, which specializes in “COLORS” and their communication through events, technologies and other mediums.

Choosing Michoacán as backdrop during the Día de los Muertos, consolidated foundations of the BLOOP, reinventing an even more strong image of the festival dedicated to inclusivity: multi- culturalism and colors. Colors added to “ART IS FOR EVERYBODY”, a powerful medium capable of communicating an even greater audience across the world. 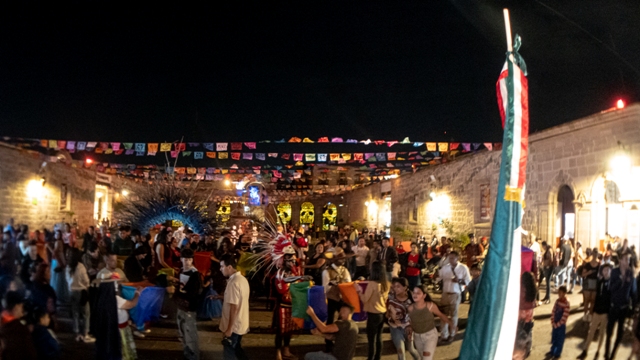 Internationally renowned artists joined the pop-up edition for this national celebration that praises life and death, which its teachings are passed down to generations to generations: Said Dokins (MX), Spaik (MX) and AMADAMA (EU). 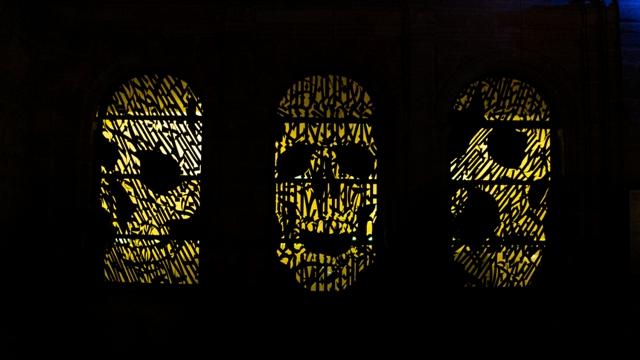 Said Dokins, the world’s leading calligraffiti artist, who was selected as one of the most influential Mexican artists by Forbes, instead of paint, he chose to harness light and shadows via stencils. Calaveras (skulls), a ubiquitous and significant motif during this time of year in Mexico was Dokins’ main subject for his calligraffiti light installation of six consecutive arches: “Aprender es morir cada día (To learn is to die every day)”. He “drew” these skulls via his signature calligraffiti, mixing occidental and oriental techniques.

By day, these skulls were voiceless wooden sculptures who oversaw the plaza and its visitors. By night they came to life through dazzling lights and cast mystical shadows. Exhibiting the transition between life and death, and regardless of any race, gender and religion, us humans are all made of blood and flesh; the universal equality of mankind. 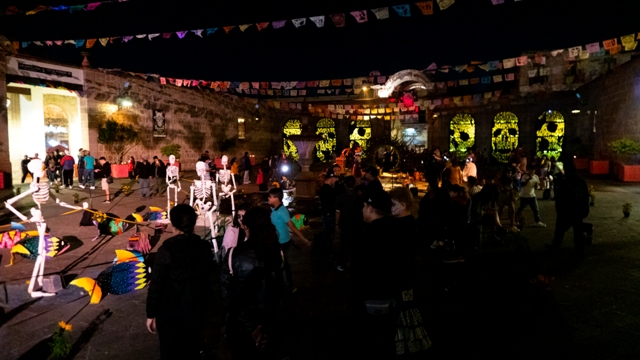 Artist AMADAMA who recently left a gigantic conceptual land-art titled “ UNKNOWN ” in Sardinia, Italy makes an appearance at the pop-up BLOOP in Mexico. He plays with Mexico’s authentic Papel Picado (pecked paper) for the occasion. These multi colored streamers usually refer to natural
divinities (such as rain, earth, fire etc), agriculture and the Mictlán (the underworld in Aztec mythology). AMADAMA gave his take on this folk-art and made them by hand with Amate paper and wood in homage to those who left this living world, paying full respect to the Mexican tradition and classical aesthetics for this special day of the year. 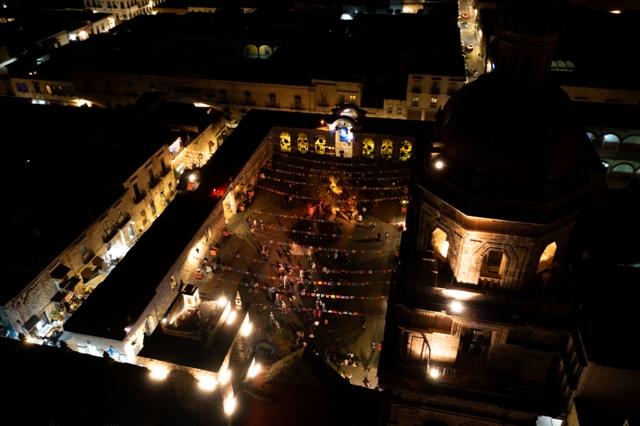 Spaik’s “Travelling to the Underworld” depicted a portal between this world and the beyond. In the form of lively skeletons, the lost ones walked through the plaza accompanied by warm colored fish alebrijes (colorful Mexican sprit guides) creating an unexpected harmony with the antique plaza made of monochromatic stones. Based on the festival’s ethos “ART IS FOR EVERYBODY”, BLOOP sure didn’t leave the little ones behind even in the pop-up edition,

BLOOP KIDS opened doors to welcome any child of any age to participate in creative workshops, all completely for free. Aiming to help new generations, prospective artists and creators, to take their first steps into the world of art and colors as tools for expression. One of the initiatives that have been a part of BLOOP since its pilot edition. Cantoya lanterns that floated towards the skies somehow reminded us of the departure of loved ones and Mariachi music were other elements within the open air exhibition, “the Alter”. Every artwork was a fusion between inclusive art and Día de Muertos customs, aesthetics and colors, creating a transcendental synergy between the pop-up festival and the holy fiesta. Through the power of art, BLOOP exhibited the essentiality of preserving tradition and culture, and that the past is scared and must not fade away nor be forgotten. 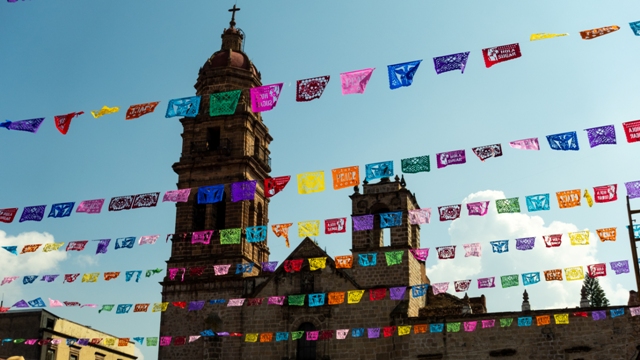 Creativity is what drives us towards the future and guides us to reunite with the past. These mutual dialogues with the local community and culture was another milestone for free, comprehensible and inclusive art, since proactive art needs the participation of the spectators “to think” to complete. BLOOP has always sought to create dialogues and stimulate active participation of the locals in all cities where it has held the event, curating the artworks and events so they are comprehensible for the public of that specific place.

Pop-up BLOOP Mexico was a ground breaking approach to art and proactivity through a reinterpretation of one of the oldest traditions worldwide, creating a magical exhibition in the heart of the city, where tradition and art met in a wonderful carousel of colors.