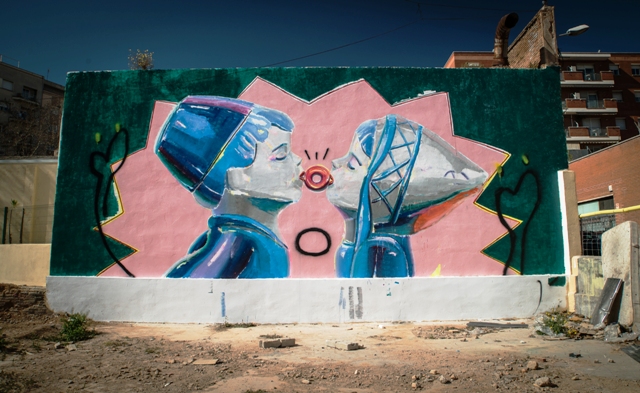 The last week of February, due to the closing of TÀPIA collective show, Spanish artist Ana Barriga Oliva was invited to paint a wall at La Sagrera’s Espacio30. This new mural intervention joins the other 3 parallel walls that were created during this exhibition which put 24 of the best figurative and neomuralism painters together, including Ana herself, who surely was a top revelation artist for the huge audience that attended the B-Murals Gallery at Nau Bostik. 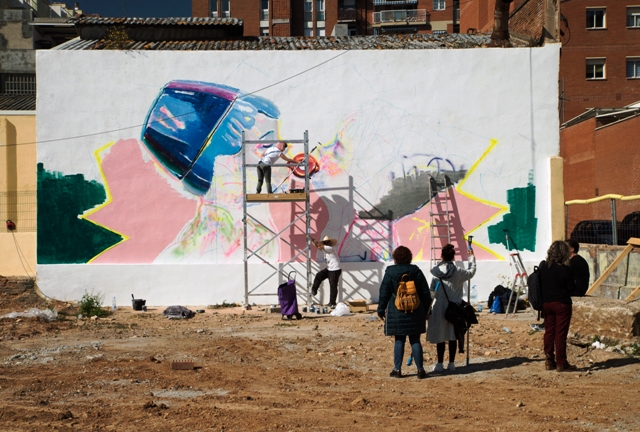 This new work was inspired -as Ana revealed – by some of the objects that the artist looks for in some popular flea markets as Madrid’s own ‘El Rastro’. The image portrays one of Ana’s latest findings: 2 pottery figures that create a casual but tender composition in that trash-pop style so characteristic of Barriga’s artwork, all of it with a super personal treatment of colour and using different techniques such as oil painting, varnish and spray cans. 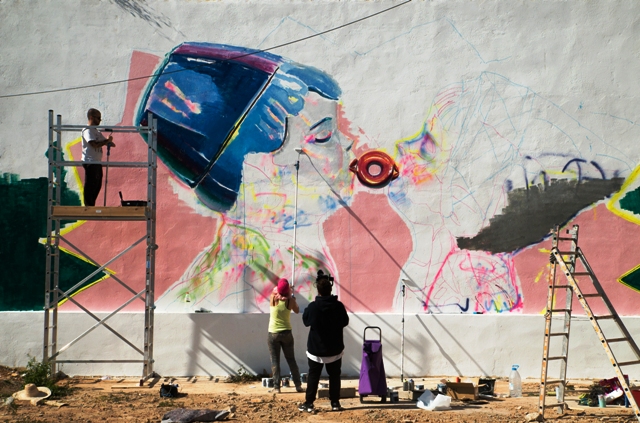 Cádiz (south of Spain) born, Ana Barriga Oliva studies at Seville’s University, although her actual residence is in Madrid. Professionally, her career begins with designing and assembling furniture. Her interest for 3D and playing with volumes takes her to ceramics, starting an step by step transition towards a tremendously original and lawbreaker style of painting which reflects her exuberant background. Ana’s painting evoques trascendental issues with a joyful personal aesthetic. After her visit to Barcelona, Barriga has attended the ARCO and Urvanity Art Fairs in Madrid where she exhibited medium and large format studio works for T20 and Yusto Giner Galleries. 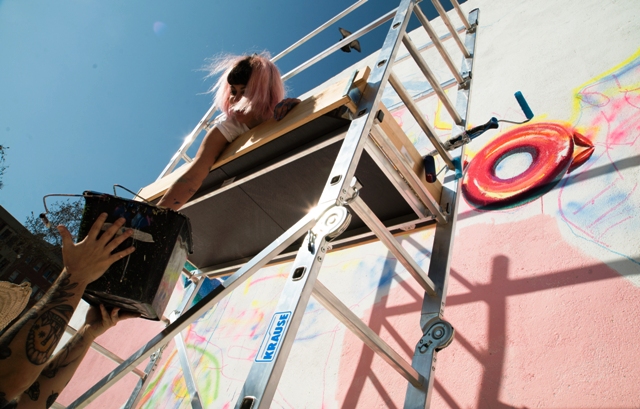 The resulting piece offers to the popular neighborhood of La Sagrera an image that, besides of being paradigmatic of Ana’s creative process, compose a universal scene of love and fraternity, representing the best final act for the closing of TÀPIA, joining the previously done murals by Jofre Oliveras, Axel Void, Emilio Cerezo and Fafa Márquez as a part of the parallel activities that took place during the exhibition.

This work has been possible thanks to the collaboration between the Sant Andreu district and Espacio30 with Barcelona’s City Council. It has been managed by B-Murals and local artist Sergi Bastida was supporting Ana.

The project has been managed by B-Murals and the exhibition took place at B-Murals Gallery at Nau Bostik (Barcelona).

B-MURALS is an specialized urban art center. An overall project which combines supporting creativity through mural interventions, art residencies and exhibitions with community works, spreading urban art and reflecting about it. A strong bet for culture as a tool of social transformation. Located in Barcelona it is managed by Difusor, an entity that works on the promotion of several art forms in the urban environment since 2006.