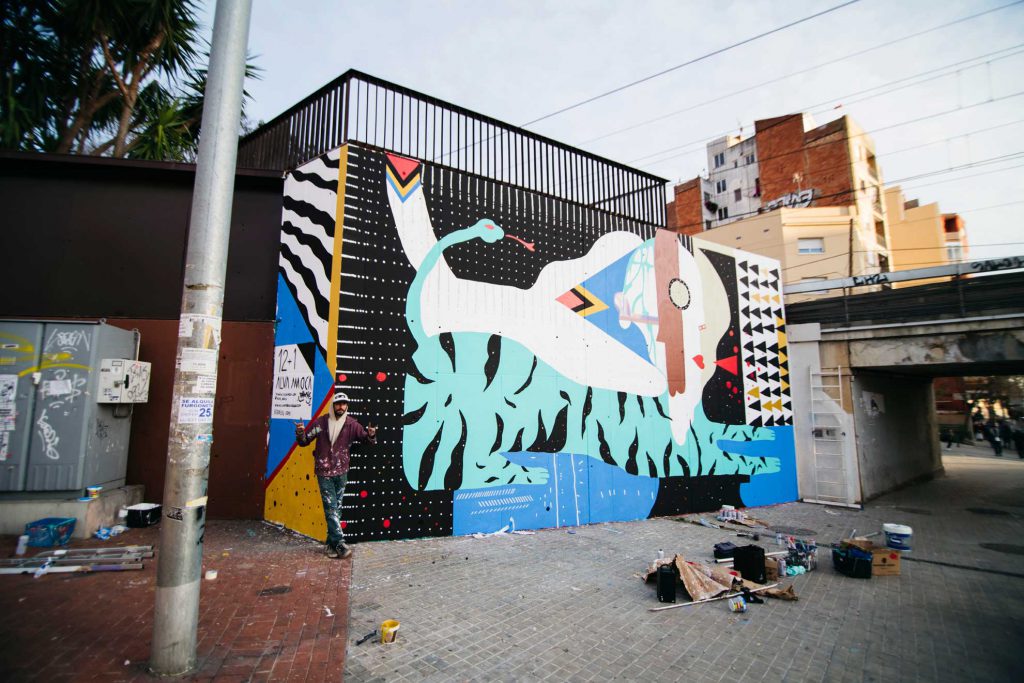 ALVA MOCA hits the wall with his intervention – Proyect 12+1, urban art in l’Hospitalet de Llobregat in Barcelona, Spain. Alva Moca (1982), holds a degree in Advertising from the University of Segovia, Spain.He studied also Digital illustration, Graphic Design, Film Postproduction, Editing and animation, Engraving, Drawing and Serigraphy. He is a self-taught mural artist. Since 2004, he works as a freelance graphic artist, art director, graphic designer, illustrator and animator of motion graphics for different agencies and producers of design and television. He combines his work with clients and his artistic career.

His graphic work is a mixture of collage, illustration, graffiti, painting and recycling, all of this with a great influence of graphic design. He has been awarded in several competitions and has exhibited in Spain as well as abroad.

The artistic collective Alva Moca was formed with his brother.
www.alvamoca.com
https://www.instagram.com/alva_moca/ 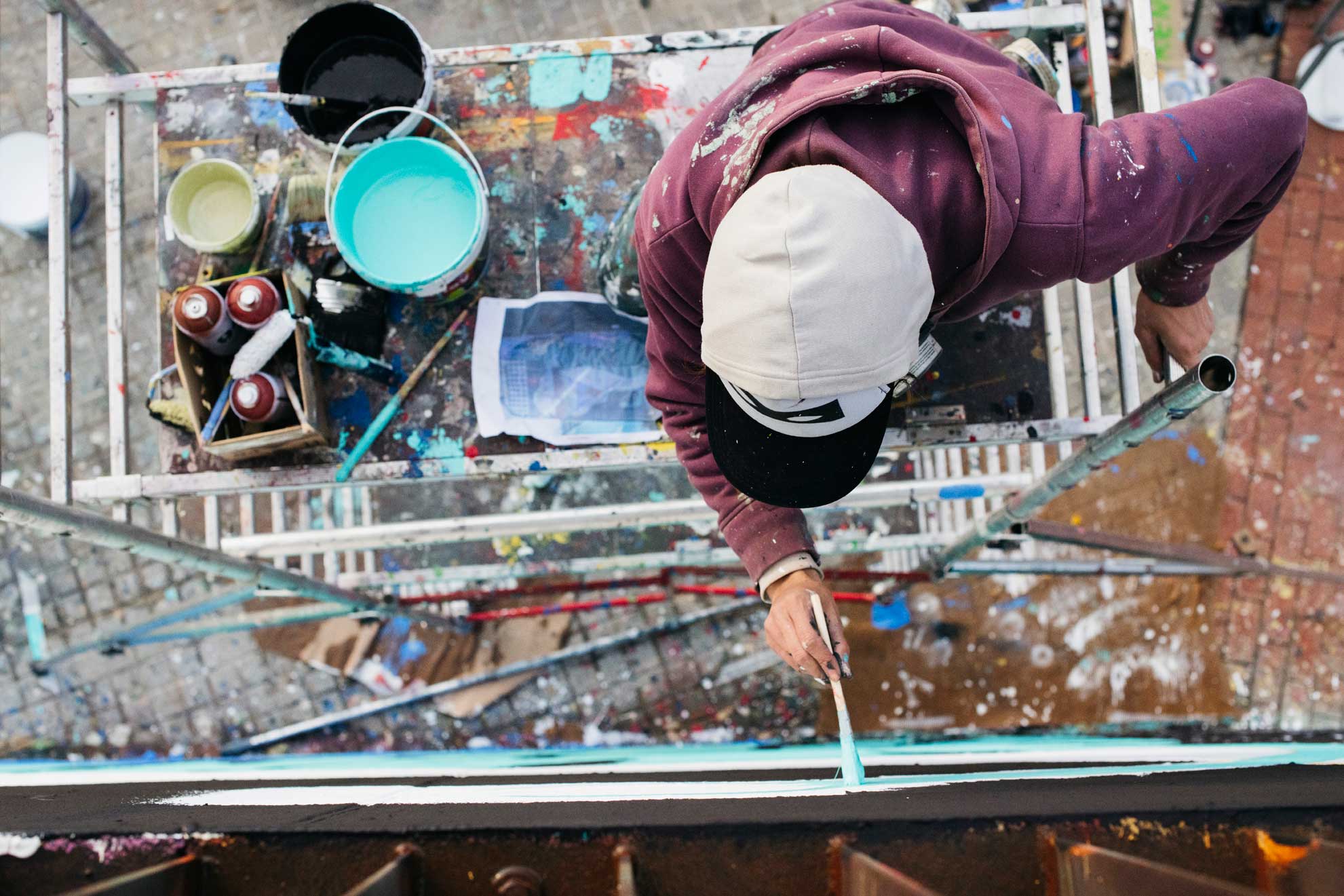 Mural “Panther Power” for 12 + 1
The origin of the name comes from an electronic cumbia song by the artist Mateo Kigman. Alva Moca wanted to transmit in the mural that same hypnotic and shamanic rhythm, always in balance with the earth.
“The mural represents the idea of being able to be more animals, more primitives, without ego. To be able to remember that we are tiny in the immensity of the universe, to feel more, to question the visible and invisible of society. The colors represent different stigmas of civilization: ocher (gold, money, power), blue (water, the organic), red (love, blood …) black and white (organization of society, conformity) (…)
I try to simplify my drawings to figures, shapes and patterns, giving meaning to each of the images that appear. Green panthers do not exist … or yes, but in another reality. “ 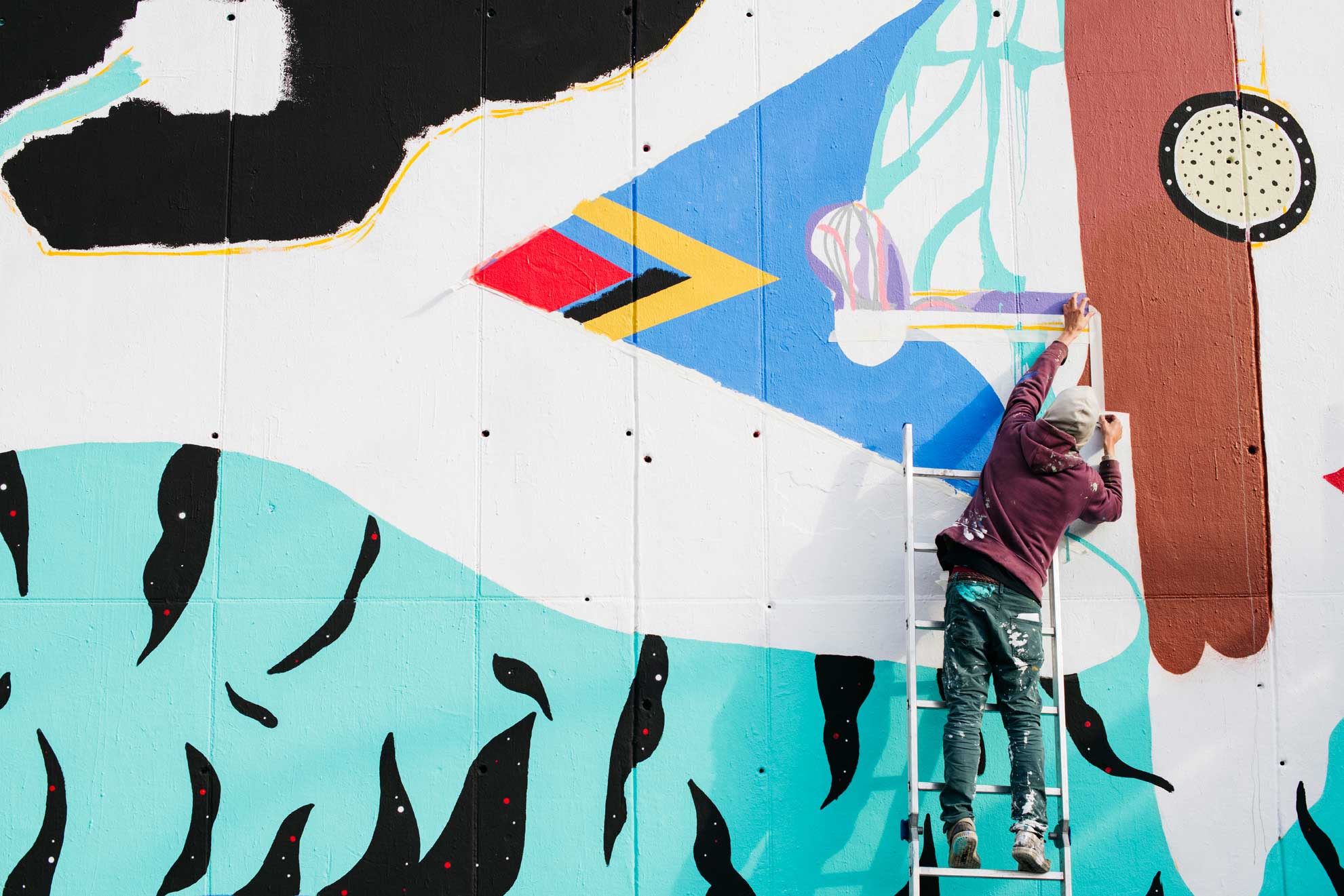 Project 12+1:
12+1 is a proposal put forward by Contorno Urbano:
12 artists, 12 months, one 50 square metre wall, one artistic intervention per month and one final exhibition, presenting each of the artists’ unique work.
12+1 is an open-air art gallery, one which changes each month.
A unique vision which problematizes the way we exhibit urban art, and the place of these artworks in the city.
The project aims to create a space for open dialogue in the city with the highest population density in Europe, in an area which sees over 7000 passers-by each day.
You can find the wall at Calle Rosalía de Castro, just opposite to the L1 metro exit for Torrassa, in L’Hospitalet de Llobregat, Barcelona.
Artists selected for “12+1” 2018:
Zurik, Joan Cabrer, Udane, Alva Moca, Sue 975, Etnik, Perrine Honoré, Xav, Dan Ferrer, Lily Brik, Sepe, Medianeras Murales.
Contorno Urbano:
Contorno Urbano is the first Foundation in Spain to be fully dedicated to street art and graffiti. The team has over 10 years’ experience in murals and urban art dissemination, as well as having worked on international projects.
www.contornourbano.com