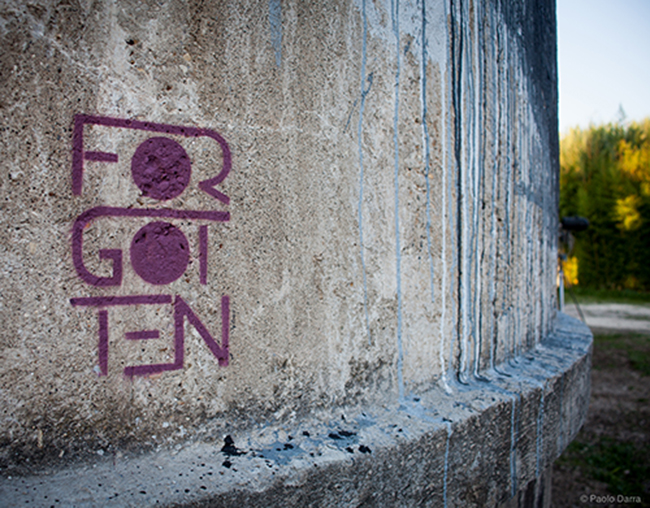 The Contemporary Art Museum of Rome MACRO houses the first exhibition devoted to the “Forgotten Project”. Forgotten… (THE EXHIBITION) will be on view from April 13th to May 15th inside the 9A wing of MACRO Testaccio. Designed by Alessandra Arpino, the exhibition is realized thanks to the support of the Embassy of Portugal, the Cultural Commission of Rome, the Casa dell’Architettura and the Institution for Cooperation and Language Camões. 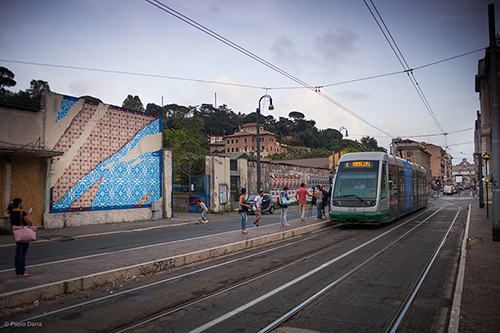 The exhibition originates from the one-year-old urban project “Forgotten”, which aims to put in the spotlight some buildings in Rome that, for reasons related to time, different habits or the growth of the city, lost their original function and now share an uncertain future: they risk to be”Forgotten”, despite their central location. To approach different kinds of building at risk, Forgotten invited different urban artists from the Portuguese contemporary art scene, bringing a breath of fresh air in the Roman scene, as none of them had ever worked in Rome before.

Bringing street art to the city centre rather than to the outskirts, Forgotten pursued an opposing trend to the general orientation of Rome’s municipality that, on the other hand, is similar to what is happening in Lisbon.
In the last months, former factories, shut down cinemas, small train stations, abandoned buildings and local markets became the target of art interventions. These art interventions will now be presented through the photography of Paolo Darra. 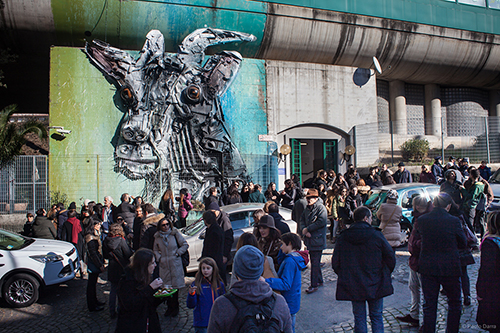 The former Mira Lanza factory, the ex-cinema Sala Troisi, the Saint Peter’s railway station and the ex-SIAR area have been colour-washed by Frederico Draw, Miguel Januário (±MaisMenos±), Bordalo II e Add Fuel, while the video-maker Leonardo Meuti was filming the interventions.
The project was realized with the collaboration of both private and public institutions, such as the I, II and XI municipalities, the University of Rome “La Sapienza”, the Theatre of Rome, the National Railways and the Casa del Cinema. 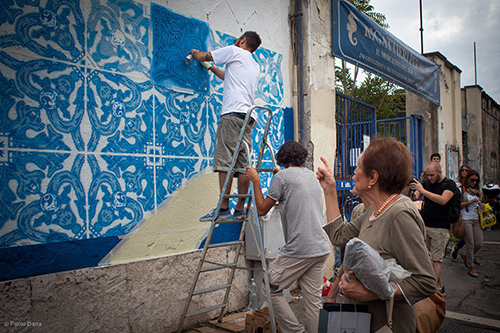 The exhibition is set up following the dual soul of the project: not only the urban project, which accompanies the architectural and social side of the experience, but also the artworks.

The section FORGOTTEN… BUILDINGS introduces the buildings that were at the core of Forgotten’s art interventions, retracing their states through photos, videos and the words of young architects.
The section FORGOTTEN… WORDS focuses on Miguel Januário who, with his artistic project ±MAISMENOS±, aims at bringing artistic value to words, as he did through his latest intervention on shut down cinemas in Rome. Words from the intervention “Light, Cinema, Auction” will shape a vortex at the centre of MACRO, symbolizing passers-by’s whirlwind of words and thoughts.
The section FORGOTTEN… FACES is devoted to Frederico Draw and his unique, incomplete drawing style, which gives lyricism to the subject portrayed, as he showed in the portrait of Pier Paolo Pasolini on the former Mira Lanza factory.
The section FORGOTTEN… NATURE shows Bordalo II’s urban animals, which speak against the threats of consumerism, as we saw in his artwork “Uma Cabra” on a small station in Rome.
In the section FORGOTTEN… TRADITIONS Add Fuel will evoke elements of Portuguese tradition bringing them to the contemporary hip – hop culture and confronting with other cultures, as he did with the work “This Connection” , speaking about abandoned buildings.
The section FORGOTTEN… PEOPLE is about the anonymous faces portrayed by Daniel Eime through his realistic stencils. The artist, right before the exhibition, will realize his large-scale mural on the facade of the “Guido Reni” food market, raising the issue of local markets that surrender to distribution chains. The market is located in the Flaminio neighborhood, the same area where – last September – the project began. 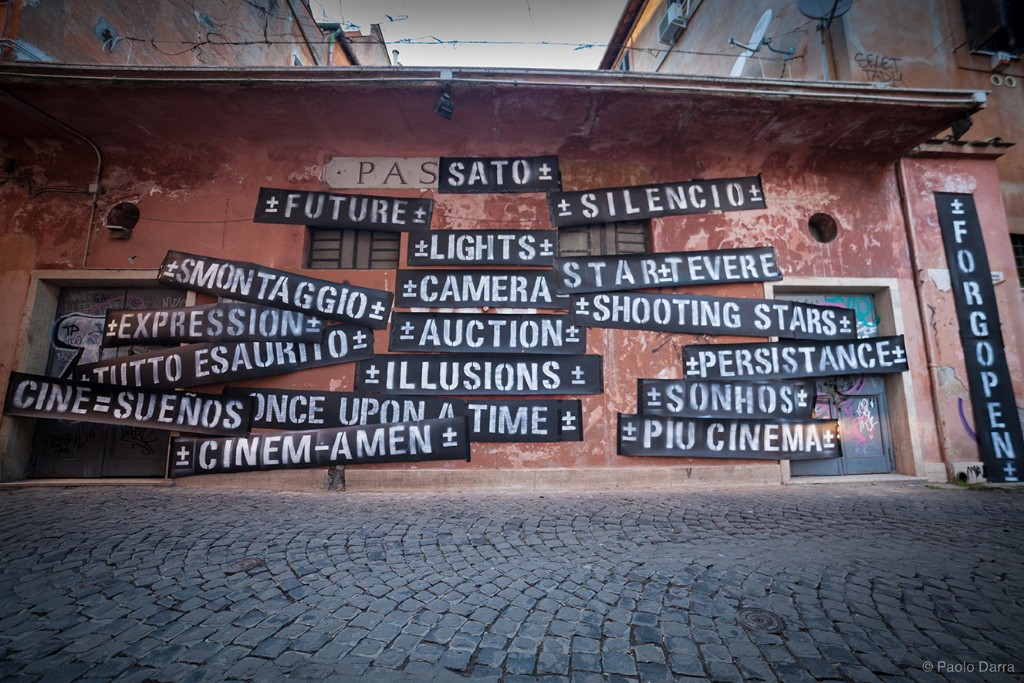 The section FORGOTTEN… PEOPLE is about the anonymous faces portrayed by Daniel Eime through his realistic stencils. The artist, right before the exhibition, will realize his large-scale mural on the facade of the “Guido Reni” food market, raising the issue of local markets that surrender to distribution chains. The market is located in the Flaminio neighborhood, the same area where – last September – the project began.

ADD FUEL
DIOGO MACHADO | Cascais, 1980
Designer and illustrator, combines actual characters, decorative patterns and his distinctive trait, with the ubiquitous hint of irony and an excellent symmetry. The trompe d’oeil in his works lets the spectator see medieval icons, for the accuracy and the form he uses in his drawings. At the same time, by getting closer to the artwork, a contemporary composition stands out: a pop universe, which is both curious and ironic. The complexity of his compositions calls for a deeper look in order to spot tiny and unexpected details, as well as a totally different meaning. The dual intent of his work – simple and yet complex- is the pulse of his universe.

FREDERICO DRAW
FREDERICO SOARES CAMPO | Porto, 1988
Architect founder of PUTRICA, Frederico Draw uses spray cans as if they were pencils. He draws anonymous faces, portraits of random people he has met in the streets. His unique style is characterized by and unfinished trait that adds lyricism to the subject. He turns every surface into a wide sketching pad where charcoals are replaced by spray cans. The theatrical effect of his countenances is coming from the extremely detailed gazes of his subjects, which are in contrast with the roughness of the face.

BORDALO II
ARTUR BORDALO | Lisboa, 1987
Irreverent sculptor, Bordallo II turns waste and scrap in large bas-reliefs through a mixed technique on wooden brackets and mounting objects. The represented subjects are mostly animals in bright colors that serve as a warning to the way an urban reality increasingly complex threatens the fate of many animals. His creations are often a critique of contemporary society that can not see the beauty that can emerge waste that itself produces.

MIGUEL JANUÁRIO (±MAISMENOS±)
MIGUEL JANUÁRIO | Porto, 1981
±MAISMENOS± is the name of an artistic project that proposes a critical reflection on the social and economic models that govern contemporary society. Viral, direct and incisive, its programmatic expression is reduced conceptually to an equation of simplicity and antonyms: plus/minus , positive/negative, white/black.

DANIEL EIME
DANIEL TEIXEIRA LOPES | Caldas da Rainha, 1986
Sensitive and sophisticated designer radically changes the stencil technique characteristics (simplification of lines) making his unmistakeable faces highly expressive through a meticulous research of the trace, with layers that predict only the use of white and black exclusively with the brush. His patterns, sometimes geometric, sometimes monochromatic are the connection between the characters portrayed and the context in which they are inserted.

PAOLO DARRA
PAOLO DARRA | Saronno, 1970
Graduated at the Brera Fine Arts Academy in 1994, he earned a Master Degree in Art Management in 1997. He specialized in video and photography and he realized documentary films in the art field. Since 2001 he is working as a freelance operator/editor for national networks, as well as a director of documentary films.

Audio-visual operator, he studied production and edition at the Roberto Rossellini cine-TV school. Independent video-maker, he contributes to national newspaper as a video-maker and a producer from August 2013.

NOTE: The vernissage on 13 April will have the presence of the artists.