One of the best things about street art is that it takes on different forms and styles in different countries around the world. Street art comes from the people who live in a place – it contains traces of their cultures and personalities, and tells you something about the feel of a location that you can’t get from a more conventional piece of art. It’s a form of communication from the artist to the observer, and it’s always exciting to see. When it’s done well, it can even challenge the perception of the person looking at it.

As an example, in this article we’re going to be looking at street art that you can find in Ireland. Several images probably come to mind when you think of Ireland, and they’re likely to be stereotypes. If you’re one of the millions of people who regularly play the ‘Rainbow Riches’ games at online slots websites like UKOnlineSlots.com, you don’t need us to remind you what the stereotypes are – the game uses them to attract players. If you’ve ever thought of Irish culture as being full of leprechauns, green hats, pots of gold, and lucky harps, you’ve probably been influenced by online slots marketing more than you possibly realize. The world of ‘Rainbow Riches’ and the other online slots that ape its style is fiction. The real Ireland is no less colorful, but much more thought-provoking.

Here are five of our favorite Irish street art pieces. We hope you love them as much as we do!

Blooms Hotel, Temple Bar, Dublin (Main Image)
We’ll start off big, and we mean that quite literally. The stunning artwork that adorns the walls of the Blooms Hotel in Dublin’s Temple bar is the single biggest public artwork anywhere in Ireland, and it’s all the work of one man. James Earley, a highly-respected and influential graffiti artist, was commissioned by the hotel to provide them with a new James Joyce-inspired look in 2014. He didn’t let them down. Psychedelic colors flow across the walls like a gas, contrasting with images of period-appropriate people in somber dress. The Blooms Hotel work is often credited with raising the profile of street art in both Dublin and wider Ireland, and opening the door to other businesses getting in touch with other street artists to get a new and original work of their own designed. Whether it’s the greatest piece of street art in Ireland is a matter of opinion, but it’s definitely one of the most important. 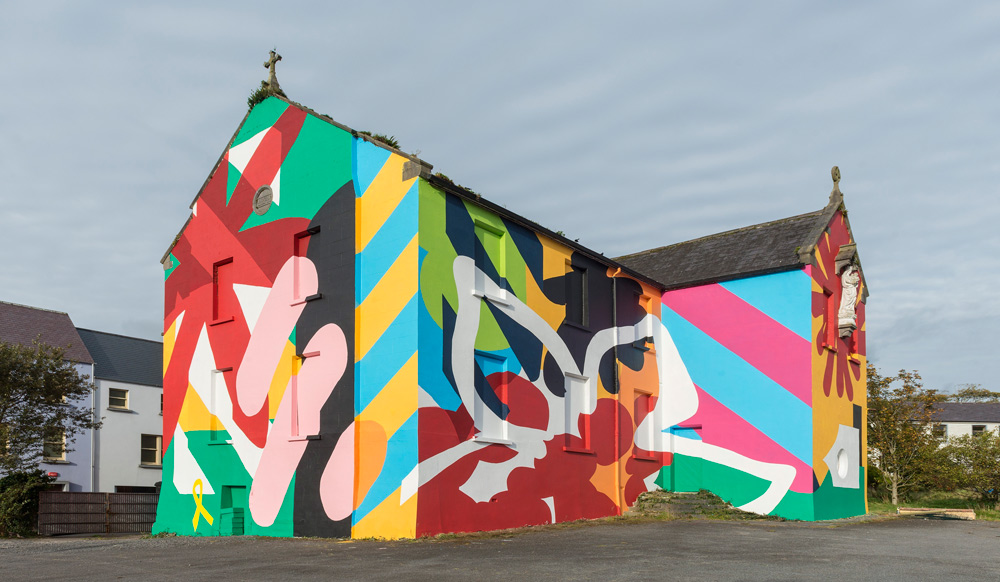 The Old School House, Westport, County Mayo
If there’s such a thing as a rock star in the world of street art, it isn’t Banksy. It’s Maser. Banksy, for all his accolades and fame, continues to hide his face. Maser, by contrast, is very visible. He’s famous in Ireland and further afield, and has even developed a reputation for dating models, much as he hates it. Maser’s work is visible all over Ireland – and especially in Dublin – but his most impressive achievement is probably the old Convent of Mercy in Westport. The building was a girls’ and young women’s school with a somewhat murky past, and had been in a dilapidated state for many years until Maser and his paintbrushes came along to give it a new face. His work has brought cheer to a place that was controversial, and may even have prevented a historic building from being demolished. The future of the former school building was unclear before Maser arrived. Now it’s unthinkable that any council or planning authority would tamper with this work of art. 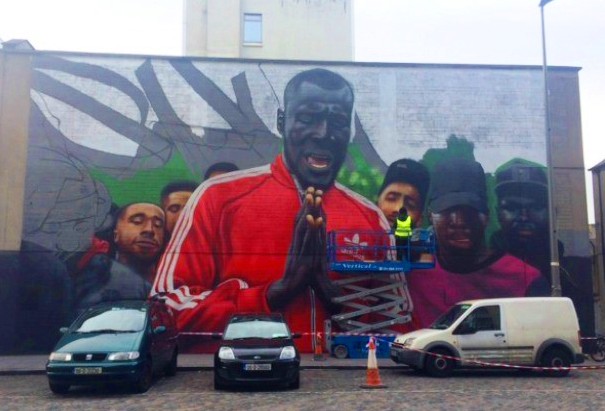 Stormzy Mural, Dublin
Whether or not you recognize Stormzy will probably depend on whether or not you know anything about British grime music, but if he’s a stranger to you, it’s probably easiest to think of him as the biggest star of British rap. Ireland isn’t Britain, but Stormzy is still revered in the Emerald Isle, and this mural is an excellent likeness of the star. Stormzy has been known to be outspoken on social and political issues, including austerity and the Grenfell Tower scandal, and it’s likely that his tendency to speak up for the voiceless that let to the creation of the mural. Once it had appeared, it was claimed by a collective known as Subset and is thought to be their first-ever creation. We hope that it’s a case of ‘start as you mean to go on’ for them. 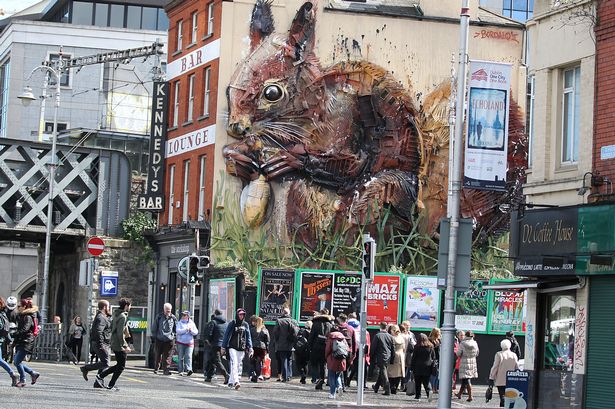 Workshop Gastro Pub, Dublin
We know we keep listing works of art in Dublin, but the Dublin street art scene is really hot right now. We can’t help but admire it, and if we limited ourselves, we wouldn’t be able to bring you this stunning three-dimensional squirrel. Irish hands didn’t create this – instead, it’s the work of a Portuguese street artist called Artur Bordalo, who is responsible for amazing creations all over the European continent. There’s more to this piece of art than just painting – Bordalo used reclaimed steel and household waste to add shape and texture to his work and encourages his audience to think about the way that waste products impact the world around us – especially the world of the red squirrel, which is currently an endangered species. We can’t think of anything like this anywhere else in the world – not even in Bordalo’s back catalog! 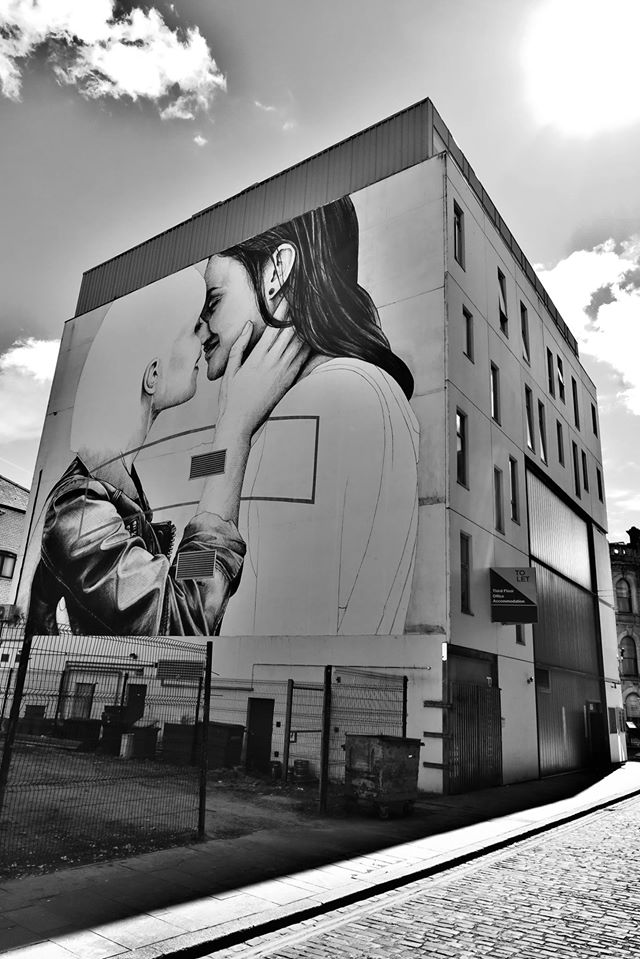 Love Wins, Belfast
We’re cheating a little by including Belfast, but the artist who painted the love-quality themed piece on the side of a Belfast wall is Irishman Joe Caslin, so we’re bending the rules to allow it. Caslin is a social commentator as well as an artist – his work tends to have both a point and a message. This particular piece, depicting two married women kissing, was designed to promote the cause of equality after a vote on the legalization of same-sex marriage in Northern Ireland in 2016. Caslin painted the work at the start of the Pride festival in the city that year. It’s based on an image of two real Irish women, who were forced to travel to the United States of America to get married on the grounds that their home country wouldn’t allow it. The theme and style of the piece are somewhat similar to another Caslin work that was painted a year earlier in Dublin. That piece was painted before the vote and provoked outrage among conservative votes, proving that street art has just as much potential to shock and provoke as any other kind.