Some of the world’s most innovative 3D artists, who are considered pioneers of this unique emerging art form, will create and display their work at the Dubai Canvas 3D Art Festival to be held in City Walk from 1 to 7 March 2017. The event features the works of 25 international artists shortlisted for the Dubai Canvas 3D Art Award.

Dubai Canvas 2017 is organised by Brand Dubai, the creative arm of the Government of Dubai Media Office (GDMO), in partnership with Meraas, one of Dubai’s leading holding companies.

Project Manager of Dubai Canvas 2017 Ayesha bin Kalli said: “Dubai Canvas 2017 will feature the creations of some of the world’s most skilled and innovative 3D artists who are pioneers of various new styles, techniques. These are artists whose work has expanded the possibilities of 3D art and inspired many other artists across the world.

The artists will start working on their creations at City Walk during the week preceding the Festival, from 22 – 28 February, giving the public an invaluable opportunity to watch them at work. I am sure that the art on display at the event will intrigue and amaze the audience and create memorable experiences for them.” 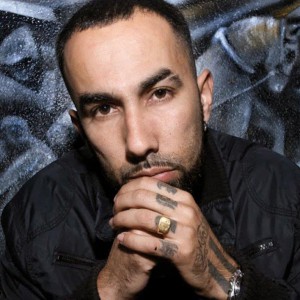 Portuguese artist Odeith, best known as one of the pioneers of 3D graffiti, is one of the shortlisted artists who will be displaying his work at the Festival. Odeith’s artworks are extremely detailed and realistic, almost photographic in their precision, creating the impression of something solid. Viewers often find it hard to believe that his 3D works are regular flat-surface paintings and not sculptures when seen from a certain distance. Internationally recognised for his 3D pieces, Odeith is often invited to exhibit his work outside of his native Portugal. Odeith is no stranger to Dubai having exhibited his work in last year’s Dubai Canvas. 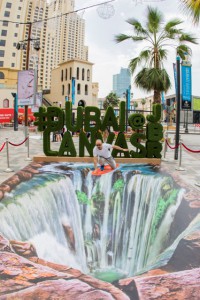 Qi Xinghua, who describes himself as ‘China’s first 3D artist’, is a four-time Guinness World record holder for making the world’s largest 3D paintings. Xinghua, who is making his second appearance at the annual Dubai Canvas Festival, is renowned for the strong 3D impact of his designs, which often leave people wondering what is real and what is fantasy. He uses a technique called ‘reverse version’ or ‘inverse-perspective’ in which far away objects appear big and close objects small. 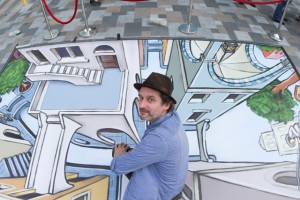 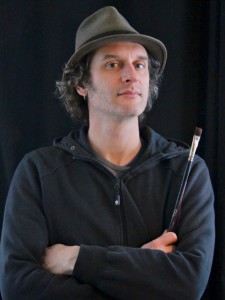 Ruben Poncia from the Netherlands is another artist returning to Dubai for this year’s Festival. He started his career making acrylic and oil paintings in a realistic or surrealistic style in which he sometimes used perspective tricks. Later, he used his perspective tricks to create 3D street art. Poncia, who now works mainly as a 3D street artist, performs at 5-10 festivals a year. He considers street art as an artistic challenge as the artist is out in the open and has a limited time to create his work. 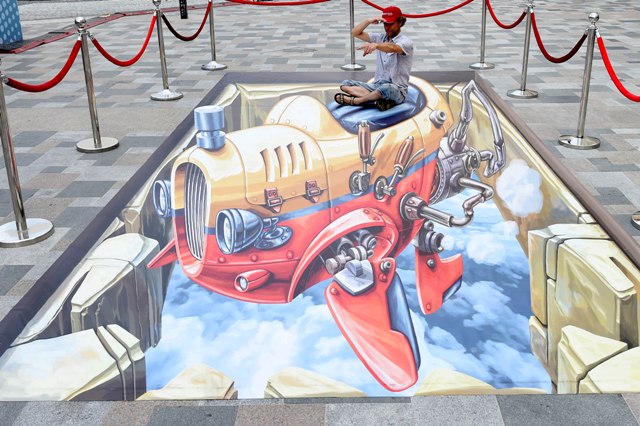 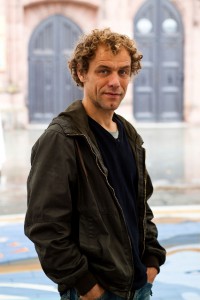 Remko van Schaik from Netherlands, yet another artist returning to Dubai for the Festival, believes 3D street painting is a great test of an artist’s creativity and skills since it is a very public activity. He started pursuing street painting after seeing street painters working in his hometown Utrecht. After initially creating 2D street paintings in the traditional way, he got interested in the technique of making 3D street paintings.
Truman Adams, who sold his first painting at 10, is a versatile artist who works in a range of genres: mosaics, portraits, illustration, fine art, murals, decorative, and 3D and 2D street art.

Vera Bugatti, an Italian artist and street painter whose works feature human, ontological and environmental issues, takes inspiration both from ancient and contemporary themes. She has taken part in several street art events all over the world. Bugatti works with several techniques, ranging from chalk and paints to wire, electric elements and nails.

Rene Muniz, from Brazil, is an advertising and graffiti artist, whose passion is to convey positive messages like love and peace through art. 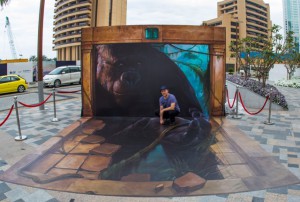 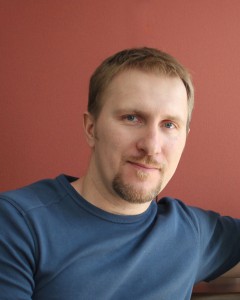 Russian artist Nikolaj Arndt who also participated in Dubai Canvas last year, has displayed his 3D art pieces at street art festivals in different cities across the world. In 2006, Nikolaj Arndt moved to Germany where he is now based. He currently teaches at a private art school and works with advertising agencies and galleries.

Ryszard Paprocki is an architect and painter who is considered Poland’s most renowned 3D artist. Since 2011, he has created several large 3D paintings in Poland and across the world. His work is usually created in the presence of a large audience. Separately, he also creates easel paintings, monumental paintings, interior designs, sculptures, landscape architecture and industrial design as well as abstract paintings, installations and large hyper-realistic 3D graffiti.

The AED2.3 million Dubai Canvas 3D Art Award saw a total of 122 entries from 35 countries. Artists who submitted proposals for the Award represent almost 80% of the global community of 3D artists. The 25 artists shortlisted for the final round of the Award will display their creations at the Dubai Canvas 3D Art Festival to be held in March.
A jury comprising of renowned international and local artists will evaluate the 25 shortlisted artworks to select three winners for the Award. The winners will be honoured at a ceremony to be held at the Festival. There will also be a ‘People’s Choice’ award based on votes from the public.

Dubai Canvas 3D Art Festival 2017 aims to build on the success of last year’s Festival. The 2016 event, which featured the works of a wide array of artists from across the world, received an overwhelming response from both residents and visitors to Dubai.

‘I Support Street Art’ is a media partner of Dubai Canvas.