This past November, B-Murals inaugurated TÀPIA, a collective exhibition of 24 urban artists referring to neo-muralism and the most groundbreaking and contemporary figurativism. 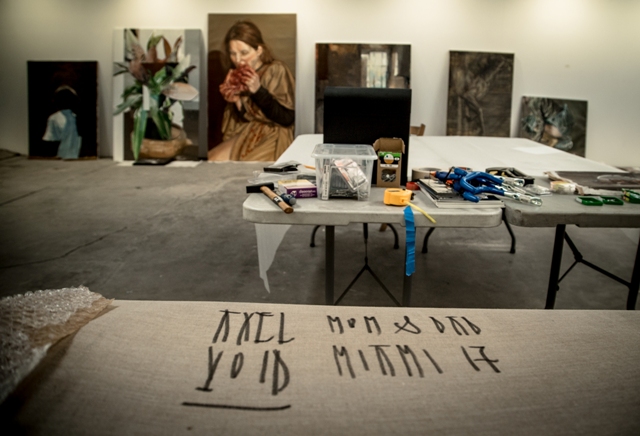 Commissioned by Axel Void, this meeting has brought together a group of artists who, focusing on motifs such as everyday life and the irony resulting from the human condition, create their works from classical pictorial techniques both inside and outside the gallery.

The inauguration culminated with a large volume of visitors who were able to enjoy the peculiar works of TÀPIA along with the presence of some invited artists such as Jofre Oliveras, Emilio Cerezo, Fafa Márquez and Axel Void himself.

Apart from the exhibition in the urban art center B-Murals, the artists that were in Barcelona painted a series of murals spread across different parts of the city. Everyone with their unique style, the artists Axel Void, Jofre Oliveras, Fafa Marquez, the external collaborator Pollo7 and Emilio Cerezo, made, during the opening days, a series of street performances following the style related to the main axes of TÀPIA: figurative art, neo-muralism and day to day life.

JOFRE OLIVERAS / NAU BOSTIK
Coming from Girona, Catalunya, Jofre Oliveras, dedicated a spectacular intervention to the walls of Nau Bostik inspired by the social reality that is currently inhabited by the catalan territory. Based on the image of a lady with it’s face covered, Jofre emphasized with this mural, the trivialization of the term “terrorism” in the political and social context within the framework of the current conflict between Catalonia and Spain.

With a unique virtuosity and it’s characteristic figurativist style, Jofre made this spectacular mural that emerges from an artistic project that wants to portray several people and figures of the territory to capture them in the street following his tireless desire to denounce through art. 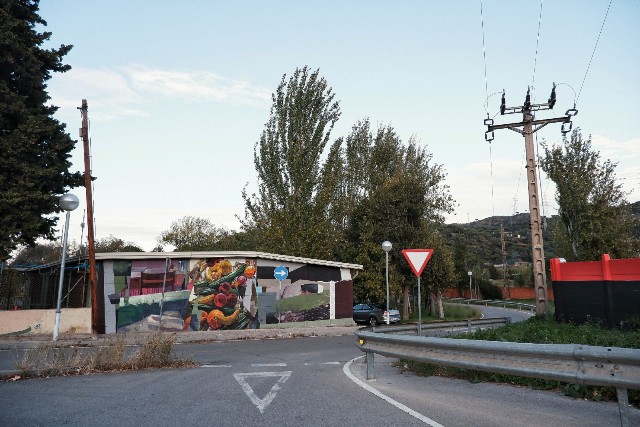 EMILIO CEREZO, FAFA MÁRQUEZ Y POLLO7 / CARRER DE ORISTÀ
These three artists dedicated to the neighborhood of Vallbona a collaborative mural where the characteristic classical but also abstractive forms of those three artists were reflected in this elaborate intervention. With a mural where figurativism merges with a composition of the most contemporary geometric shapes, the result is undoubtedly both peculiar and interesting. 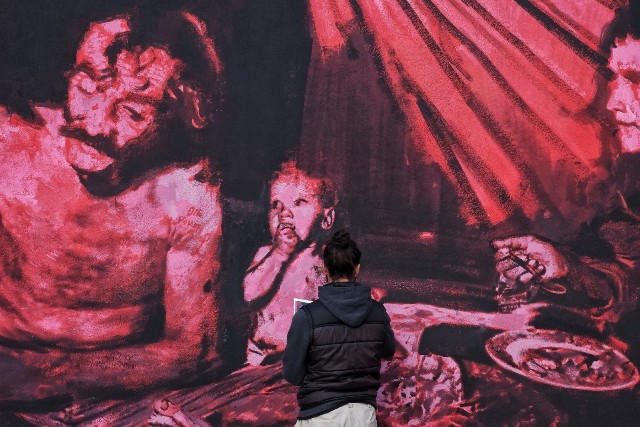 AXEL VOID / ESPRONCEDA CENTER
The exhibition’s curator also painted a mural the days before the inauguration of TÀPIA on the walls of the Espronceda center located in the neighborhood of La Sagrera, Barcelona. Following his classic pictorial style without forgetting a contemporary touch from this red tonalities that make up the mural, Axel delighted us with this genuine intervention following the figurative and neo-muralist line of TÀPIA.

THE ARTISTS
With a selection of some of the most renowned urban artists of the national as well as international contemporary scene, TÀPIA has brought together a series of creators who, guided by a set of common elements, have offered us an approach to the concept of neo-muralism; a tendency that, through classical painting techniques, is able to raise murals on the outside where magical realism, everyday life and the routine of society are emerging as main themes in order to emphasize the contradictions of the human condition itself.

All this from a series of styles that range from the purest psychedelia, the trash, the most classic realism and the reinterpretation of everyday reality to make us reflect on our contemporary society.