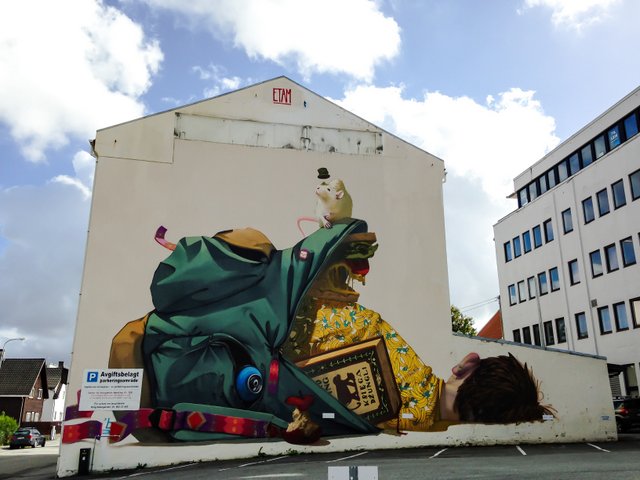 ”ISSA”, a media partner of Nuart, the international urban art festival that turned a former “oil capital city” in southern Norway into one of the world’s hotspots for graffiti and street art. Here are our favorite murals, enjoy the reading and let us know what are yours! 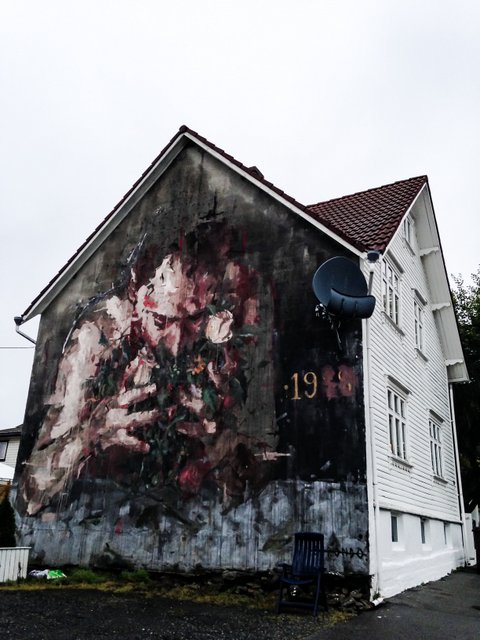 We love Borondo’s instinctive and strong trait, the way he shapes bodies and countenances with wide strokes, which are thick like the scenes he depicts. Here, the atmosphere giving off the man holding and smelling a heap of flowers is classic yet highly expressive, direct and gloomy, affecting and thought-provoking. 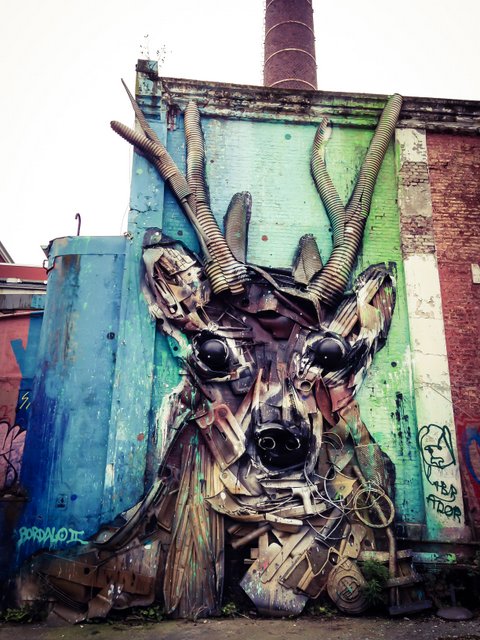 Inside the former beer factory ‘Tou Scene’ the Portuguese street artist Bordalo II realized one of his iconic big trash animals, mixing sculpture, trash-art and painting to shape an animal out of car parts, old bicycles, pipes, screens and other rubbish, speaking against environmental degradation.

In this piece we find the iconic style of the Polish duo Etam Cru: a figurative approach with a strong element of fantasy oozing with colour. As usual, this mural melds elements belonging to the fantastic and the surreal to a lifelike scenario and hyper-realistic objects, which help the viewer to frame the fantasy in a realistic scheme and believe it.

“MONUMENT TO A DISAPPEARING MONUMENT”, 2016 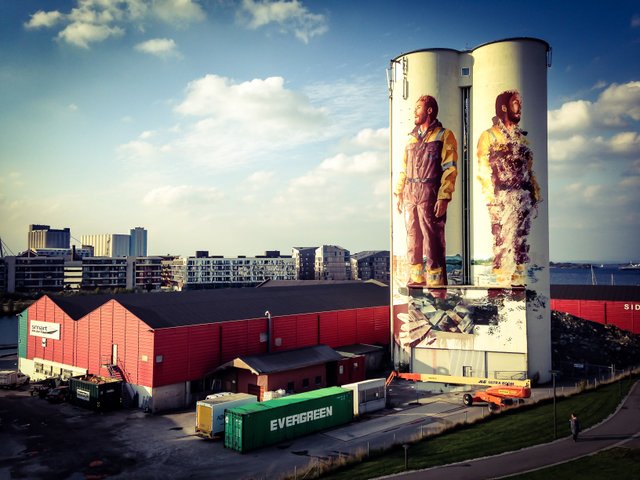 The Australian street artist Fintan Magee painted a colossal diptych during the latest edition of the festival. This epic work on two 32-meter silos is about the fall of the price of oil that brought unemployment and economic crisis to the oil-driven city of Stavanger. It was painted in the former industrial area of the city, which will be demolished soon (yet another consequence of the crisis). It depicts a man working in the oil industry and his reflection, which is faded and blurred, as the economic future of the working class and –therefore- of the city. Fintan Magee often highlights social issues like climate change or class struggle and in this case the message is not only about job losses in Norway but highlights the global crisis and the collapse of western industries as a whole. 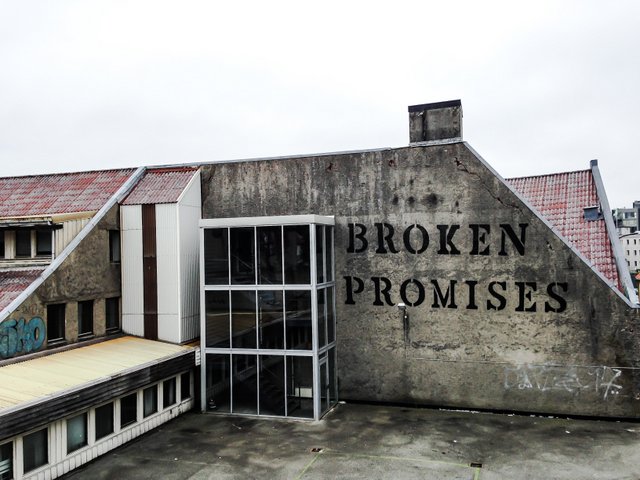 John Fekner is a street artist who creates conceptual works consisting of words, symbols and messages aiming at bringing awareness. In the summer of 1980 he stencilled “Broken Promises” on a decaying building on Charlotte Street in the South Bronx to highlight the inadequate housing and poor services afflicting the neighbourhood. Thirty-four years later, he did the same stencil in Stavanger. 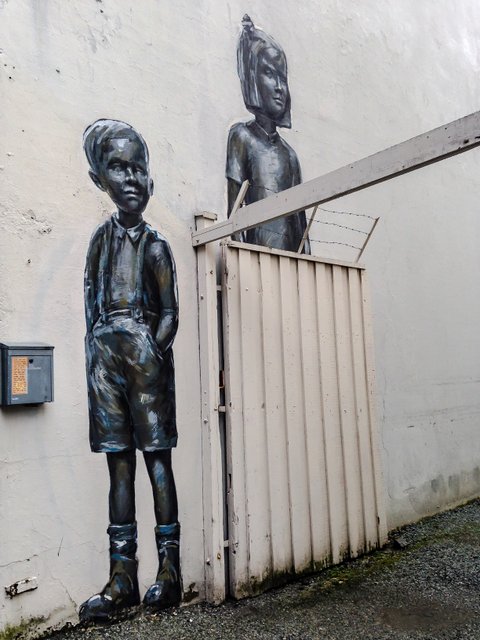 Internationally known for his series of interactive murals on the streets of Penang (Malaysia), this Lithuanian artist focuses on the spontaneity of children’s play tapping into the original instincts of adult viewers who may have lost their ability to access their playful nature.
As usual, the environment surrounding the mural inspired the artist: a classical bronze statue of two kids holding hands -Johanna and Broremann, from a popular children’s book. Right next to the statue, Ernest twisted this idyllic image by portraying the two kids separated, with a (real) tall barbed-wire door between them. 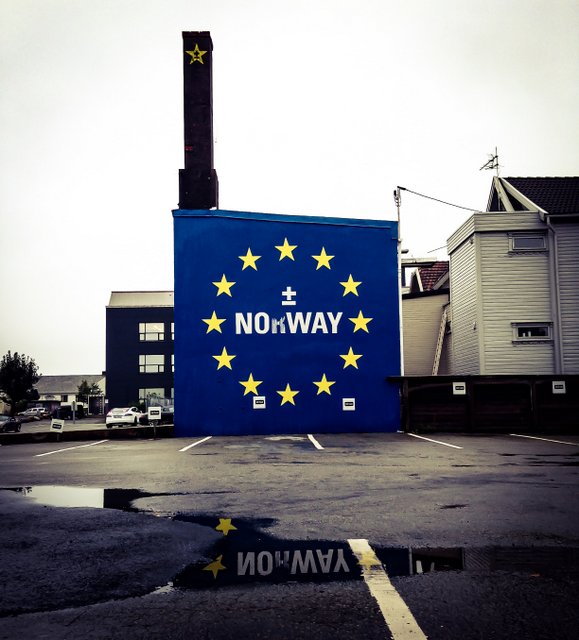 MaisMenos is an intervention project by Portuguese street artist Miguel Januario based on his critical reflection on political, social and economic bureaucracies managing modern urban societies. The site-specific work he realized in Stavanger refers to the referendum with which the Norwegian people declined European membership. Twice (in 1972 and 1994). 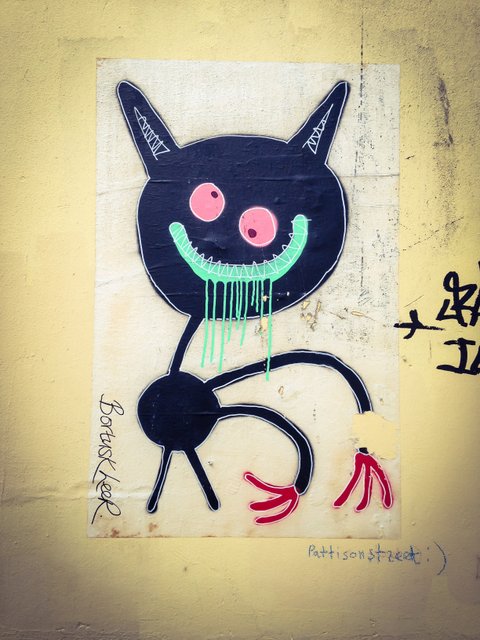 Scattered throughout Stavanger are the happy, brightly coloured monsters by Bortusk Leer. They are painted in a childish style, often on newspaper pasted on the walls, in neon, psychedelic colours to properly brighten up the passer-by’s day and put a smile on her face. The Slovenian artist has said that he likes to paint like a 5-year-old because he likes children’s spontaneity, and his philosophy is epitomised by his slogan: “Cheer Up You Bastards”. 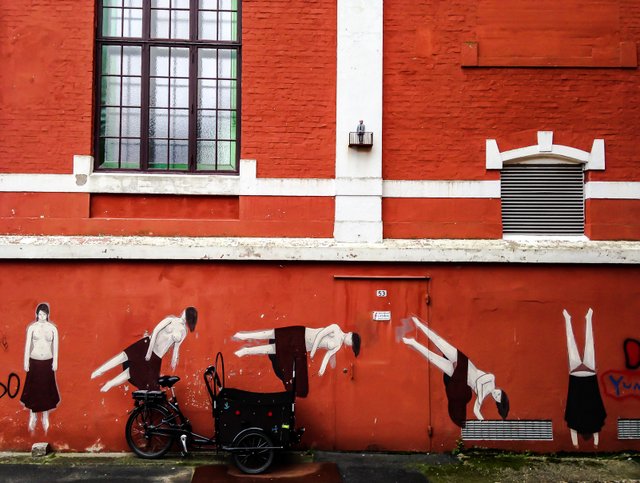 The mural, which is located inside the former beer factory “Tou Scene”, depicts several images of a girl doing a cartwheel, like a series of motion stills. His usual style is simple yet beautiful, and smart: the Spanish street artist Escif always manages to make us smile, but in a bittersweet way. 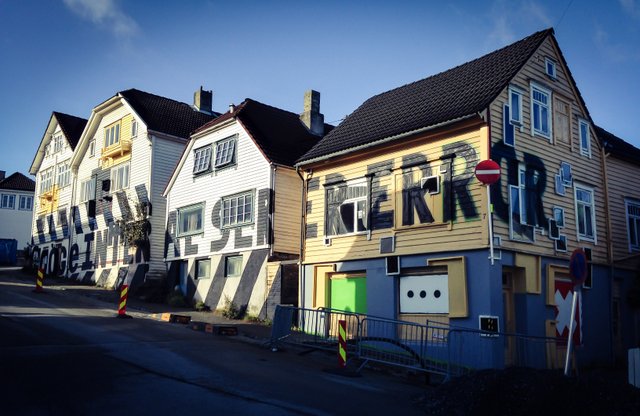 This is not the first time that the French street artist MTO has explored the intersection between street art, public space and augmented reality. His recent work includes a series of large-scale murals that, when documented, create a “bug” in Google Earth or Google Street View and are therefore designed to be completed only when captured by a Google car. The piece he did in Stavanger also includes interior scenes brought to the exterior, such as chairs and tables cut in half and glued to the façade of traditional Norwegian houses.

Written by our on the spot representative Giulia Blocal from www.blocal-travel.com