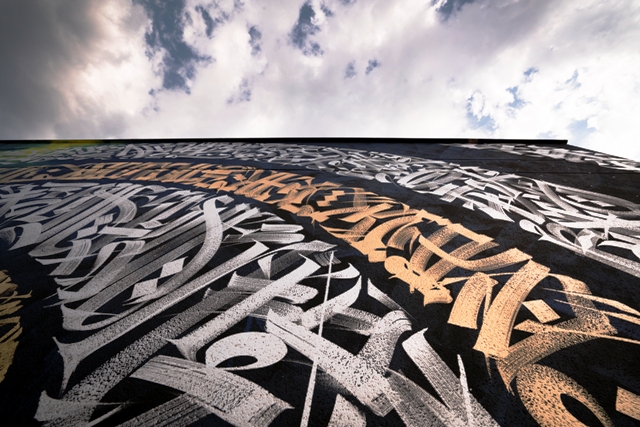 Said Dokins is a Mexico based artist who uses multiple art forms to project art in the city. The orientation of his work is directed at society’s reflection on its own history, the symbol of death in relation to the conflict of power, destruction, survival and explanatory theses of the world as mechanisms of control used by imposed regimes.
These are old problems that are reflected in our current situation. In his everyday creation, the city is the main focus of action. In the city he finds an infinity of levels and mechanisms for operating and relating with people: I draw  on various ways of doing; such as graffiti, calligraphy, performance, installation, intervention and video art. As he puts it in his own words:

”The urban territory has devoured me, and I have always lived in big cities. Although I know the street, I am continually surprised by the quantity of tags, stains and colors of the city, the conflicts and penuries, the defensive attitude of those of us who live in the city, the multitude and the disfunctionality of the city. Ever since doing graffiti, my relationship with the non-authorized has marked many of the ways I operate. I always try to get away with what I can, to do the unexpected, to break schemes of legality. Working in the urban space, one can point out situations. One can reach people’s daily lives in some way, infiltrating disorder, and in this way pass from private interests to public ones.”