Meet Vitaly Tsarenkov, also known as SY. An all round skilled russian artist, who started his career on the streets of St. Petersburg and nowadays boasts a portfolio that spreads from murals to sculptures. SY has an eye for new technologies and is highly driven to expand his means of expression. His vivid art is colourful and centred on the human existence while using symbols and cultural codes to tell a story. In the end however each viewer makes their own interpretation!

-Hi Vitaly, what would you like to drink? Coffee, Tea or something else?

-Introduce yourself to us – as if we had no idea who you were!

My name is Vitaly Tsarenkov, also known as SY. I’m a visual artist from St. Petersburg, Russia. I started my artistic career with graffiti and later came to studio work and exhibition activity.

– Where does your (tag) come from?

I thought up my alias almost in the very beginning and never changed it. I wanted to create a tag that would be unique as much as possible because I didn’t want to meet another artist with the same name one day. So I just took an English alphabet and started looking for letters that were most appealing for me. My idea was to create a new word that doesn’t exist in the dictionary. At the same time, I had a local graffiti magazine, one of the first ones in Russia. It’s called Spray It, and it was one of the big inspirations for me at that time. Its black and white cover has an embossed tag with the name of the magazine on it. And the first and last letters in the word “spray” were so awesome, so I took them as my nickname. I also thought it was a good choice because not many artists used two letters as their nicknames.

So the pseudonym SY doesn’t have any specific meaning initially, but its origin came from the word “spray” and can be considered as its abbreviation. It’s very cool because my background comes from a graffiti culture, where spray cans are the basic tools.

-How do you define yourself and why? Artist? Street artist? Something else?

I define myself as an artist. At first, when I started doing graffiti and was painting on the walls only, it would be appropriate to call me a street artist. Nowadays, I work in various media, mostly with brushes and acrylic paint on canvases, so any of these qualifying terms just don’t fit me. I see myself as an artist in a broad sense and don’t like it when people, for any reason, want to put you in a small box.

My interest in art started with street culture in the early 2000s. When I saw the first graffiti pieces in music video clips on TV, it instantly caught my attention. I was a teenager, and it was one of the most powerful impressions of that age that had a considerable impact on all my life.
At that time, graffiti was associated with hip-hop culture, so like many artists who started at that time, I tried dancing breakdance, but with no success. I also was interested in skateboarding and everything that had a spirit of newness and counter-culture in it. But in the end, I concentrated solely on doing art because it always was my main interest.
It’s strange now, but when I was painting on the streets only, I even didn’t think about trying more traditional surfaces as a canvas. It changed when I had got a letter from a gallerist from France who wanted to buy my paintings. She saw my street works in a book about Russian street art and asked me if I had any studio works. It was the first time when I realized that I could expand my artistic practice in a new direction.
From that point, I have started creating paintings, then sculptures, and so on. At present, I’m interested in applying my visual language to different media and using modern technologies in my work.

I dress up and drink a glass of water.

I think when we talk about any visual art created initially without music accompaniment as a part of it, there is no need to add any sounds to bring it more meaning. The best music accompaniment for street art, in my opinion, is the natural sounds of the environment, the city itself.

I don’t have a specific source of inspiration. I think it’s a complex of things. Everything and everybody that you deal with has an impact on you, but inspiration has more connection with your inner state. When you feel good, you want to create. And you can get this feeling from music, books, people, traveling, nature, and whosoever.

Preparing a design is the hardest one. All my sketches look the same as the final pieces of art because I thoroughly work through them.
At first, and it’s the main task, you need to think up the idea, or if you have one, to find a way to express it. Usually, I start working with a pencil on paper and make a lot of drawings. When I get a rough idea of the composition, I proceed to work on a computer and work out the position of elements and their scale more precisely. Then I choose a color palette, and it’s another big part of the whole process, which can take the same time as the previous ones altogether.
When I am satisfied with the result, I can realize the sketch in physical form. It takes efforts and time too, but the hardest part is behind. Such an approach gives me to try different options and minimize mistakes beforehand, which saves time and very important when you work on a large scale.

There are a lot of artists who make or made fantastic art, so it’s not easy to choose some. In any case, it can be different things. I can admire aesthetics, forms, choices of colors, conceptions, or how it all works together. In a couple of words, I like artists who combine powerful ideas and impressive visual presentations in their works.

It can be any city with a rich cultural and artistic life, architecture, or pleasant climate: a big megapolis with millions of people living there or a small village in the countryside. I haven’t traveled around the globe a lot, but every time you visit a new place, it inspires you in some way.

Music is my big passion, and when I have free time, I search for new musicians and their gems I never heard before. I also like learning new things, expanding my horizons, and acquiring new skills, which all reflect in my work finally.

I have some general ideas for big projects for every media I work with, which I want to realize in the future. I can describe it, but it won’t be interesting at all. It’s better to make them first and then talk about it. 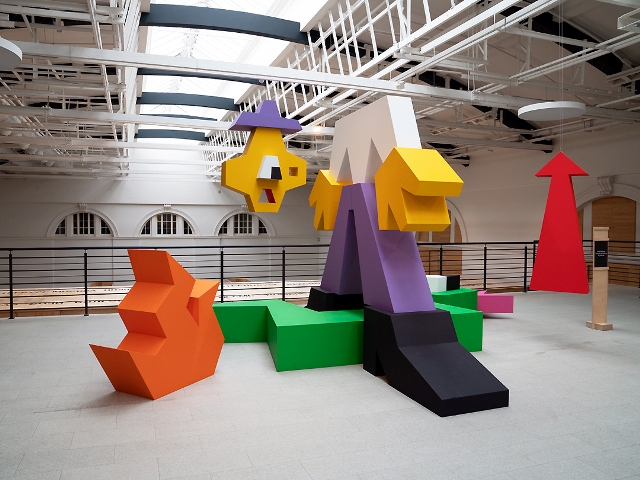 I want every of my work to carry some concepts or messages. I’m not interested in creating just abstract or figurative art just for the sake of aesthetics. I want to provoke viewers on reflection about themselves and the world around us. I use symbols and cultural codes to tell a story or build a plot, which then can be interpreted in different meanings depending on the context or personal perception of the viewer.

The main element of my art, which presents at almost every work, is a human. I like to use contrast and conflicts to emphasize the paradoxes of our life. Some artworks contain elements of absurdity and humor, while others have more metaphysical or social-political aspects. I always work on developing my artistic style, which has been evolving a lot over the years and passed different stages. In general, it has been influenced by the aesthetics of 8-bit console video games, early 3D computer animation, the Russian avant-garde, and also an engineering education, in particular descriptive geometry and technical drawing.

Now I’ve come to maximal simplification of forms, which gave me more space to complicate compositions and color palettes. 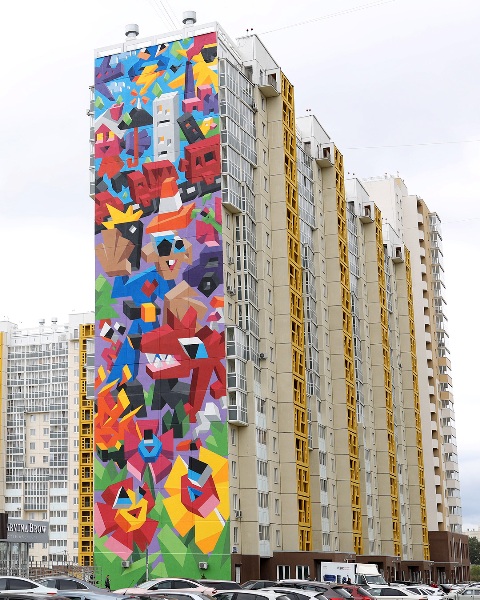 – How long time does your art work, on walls, usually survive for?

It depends where I painted it. The festival murals can survive untouched for years, but ones painted on hall-of-fame or illegal spots can be repainted or removed on the very next day. Some works lasted for about ten years, but in the end, they were buffed by the city.

-What do you think, people feel or think of, when they see one of your works on the street?

I think that most people don’t pay much attention to what they see in the street because they are absorbed by their thoughts and problems. The more curious ones who turn their attention to my works see colors and shapes at first. If they give them more time, they can make out characters and maybe to read an idea. Sometimes people come to me and ask why you do it and if you are paid for it or not. It always amuses me to see their puzzled faces when they find out that you do it for free for the sake of art. 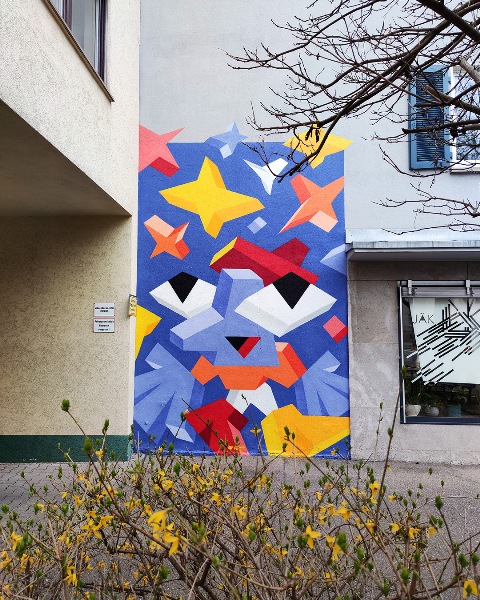 My creative plans are to continue developing my artistic practice, try new media and technology, create and show my artworks around the world.

Thank you SY –  It’s been great to get to know more about the mind and person behind such talented and inspiring works.
‘’I Support Street Art’’ team. 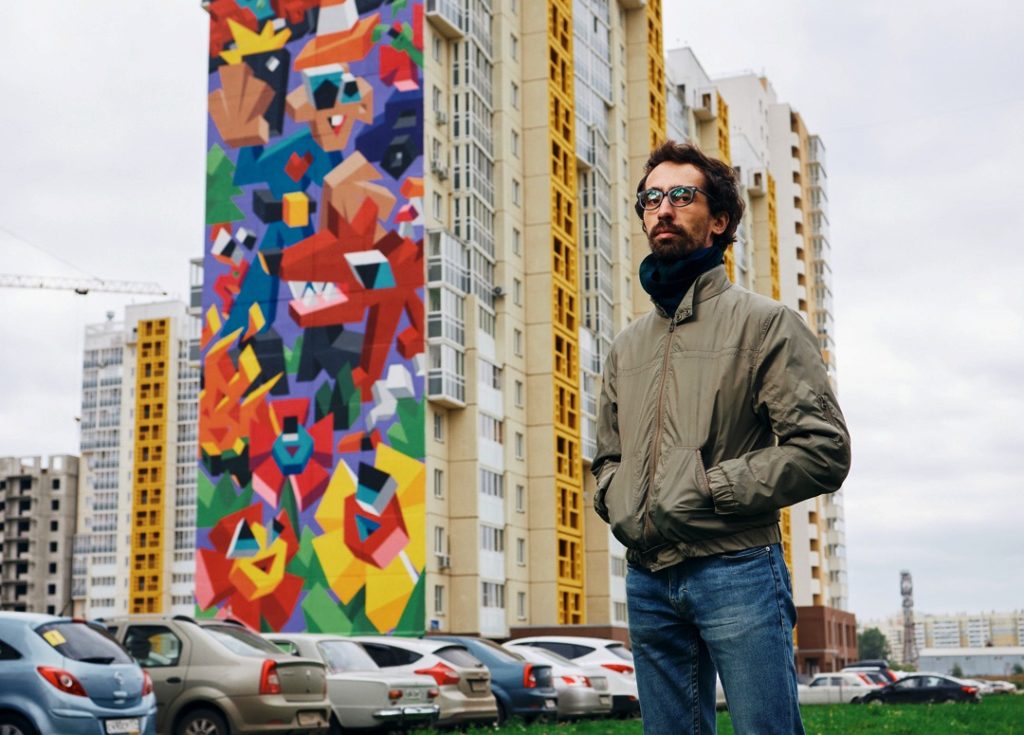