ISSA – Hi Mademoiselle Maurice, What You choose to drink? Coffee, tea, beer, soda or something else?

– Human who need colors and positive vibrations around, who think that one by one we can maybe change a little bit the way of thinking and appreciate the beauty of the human diversity and nature all around us.

– Where does your tag name come from?:

– Maurice is an old name in France for man… I grew up in the mountains, so it’s a little bit in my imaginarium a name from there… my roots… Therefore, a lot of the men of my family left this world to early, so it’s like if their spirit is with me…
And first of all, when you ask to people to name 3 artists, painters or other, you can be sure that it will be generally boys name… but, girls are here too… I like to play with masculinity / feminity, and put in front the essential fact of: Complementarity. 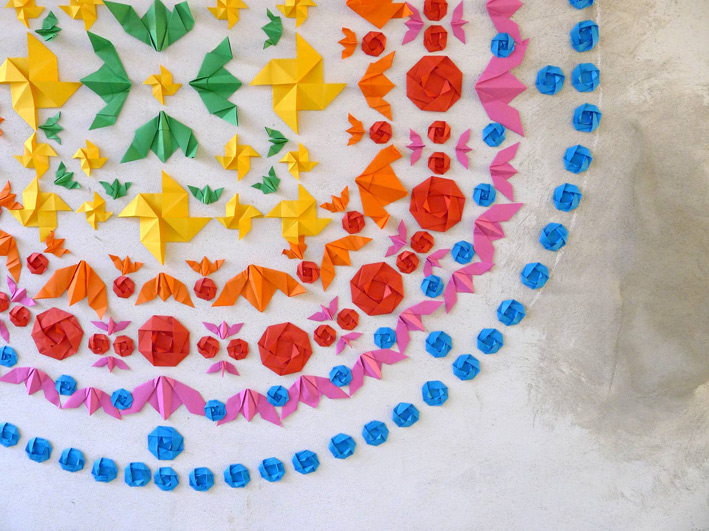 You can define me as you want, I don’t care… I consider sometimes myself like the maid/virgin of the urban art / street art (you call it as you want too)…With my papers, maybe we can say that I am a kind of “Heidi” in the city, who like to listen Hip-Hop, watching rainbows and ladybugs and say FUCK about things I feel absurd…

Everything probably began when I was in my grandparents’ farm, and when my grandpa offered me my first OPINEL (editor’s note : a traditional french knife brand), and teached me to draw on branch of hazel…then came school, study in Architecture… studying was cool, learning academic drawing… but reality of the job was sad…
So I searched myself as an artist… Paintings (really bad), photographies (really bad too), embrodery, cardboard installations…
And after spending one year in Japan, I discovered Origami, and the legend of the one thousands cranes… I was there the March, 11 of 2011: big earthquake, tsunami, Fukushima… After that, I heard about the story of SADAKO… and I wanted to say my NO to the nuclear energy…That was the first point: a fear and a anger about our way to destroyed nature and humans…

Poohing…most seriously, that depend the time of the wake up and where I am and what I have to do in the day… but really often: wake up > Folding > Emailing > Folding 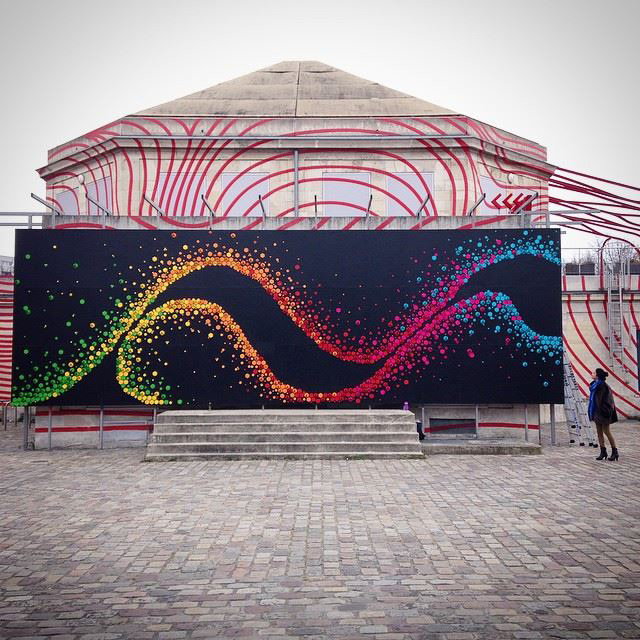 A music which will begin with an old school hip-hop song , and after a transition with some classical music, experimental one with some electro crazyness, and abstract voices and whispers in Japanese

A bike not broken, Thousands of paper in my back backpack, chalks, a small telescopic ladder, camera, cigarettes, water, fruits, sneakers, and be sure to have pockets on me. 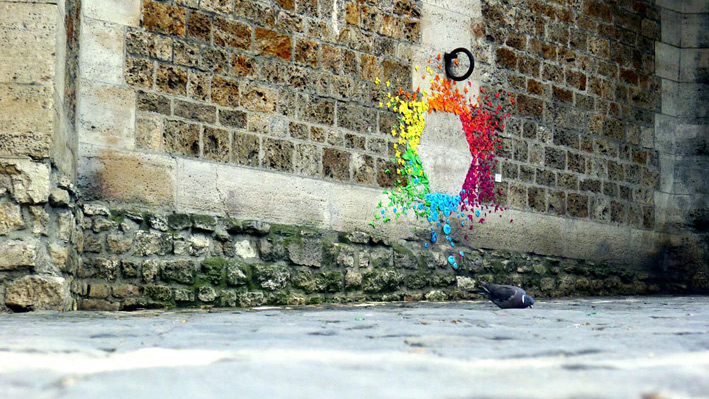 -Do You have an artist that you admire and why?

OoooOOhh… there are a lot.. the classical one: Banksy! since the beginning… And french guys like Dran or Levalet … Etam Cru too… Because their technical style is crazy and efficient.. they are really talented, and they denounce things with pertinence, poetry, sometimes violence but all the time with colors and intelligence.

All the cities are inspiring… But I like the one I did : San Francisco and Lisboa… Montreal Too… And New-York (Brooklyn) too

Creating a GIANT wall with thousands of metal origami…or making a performance of folding during weeks in the giant room of a museum, in a box of glass, with the level of origami which will fill in the box… 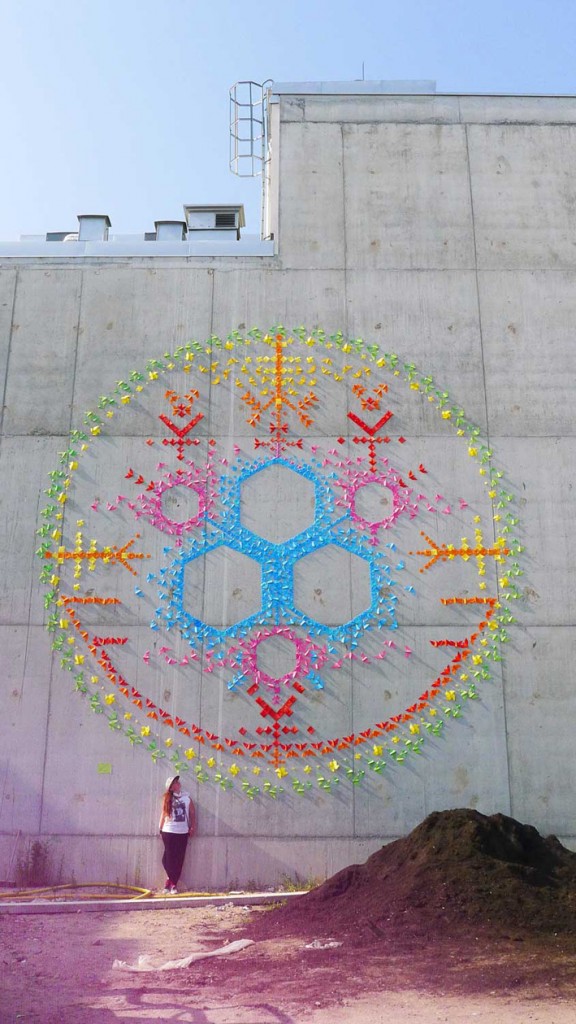 Yes, really often… the origami I used are the graphic symbol of elements of the fauna and the flora… And it’s like if one origami was one human: all together, we can in an action of solidarity try to reach our utopias.
Really often I used the hexagonal shape: a tribute to the bees, thanks to them we have flowers, fruits and vegetables.. and we are not plastic eaters! everything is linked we are a part of the same thing..
The colors I used are a kind of universal message about tolerance, harmony. Nelson Mandela spoke about the rainbow nation… “The rainbow warrior” is one of the Greenpeace’s boat, and the LGBT movement use this colors in a pacific way about accepting everyone as he is.

I really don’t care. Nobody asked me to create something in the streets. Streets are the public space, for everyone. If you don’t want that people touch what you do, you have to stay inside a gallery or a museum with a billboard saying “DON’T TOUCH”…

Reaction can be seen in their eyes, on their face, because people are smiling, the eyes are shining.. So I thing it’s a transmission of positive vibrations, and if people feel them happy seeing my creations, it’s cool! 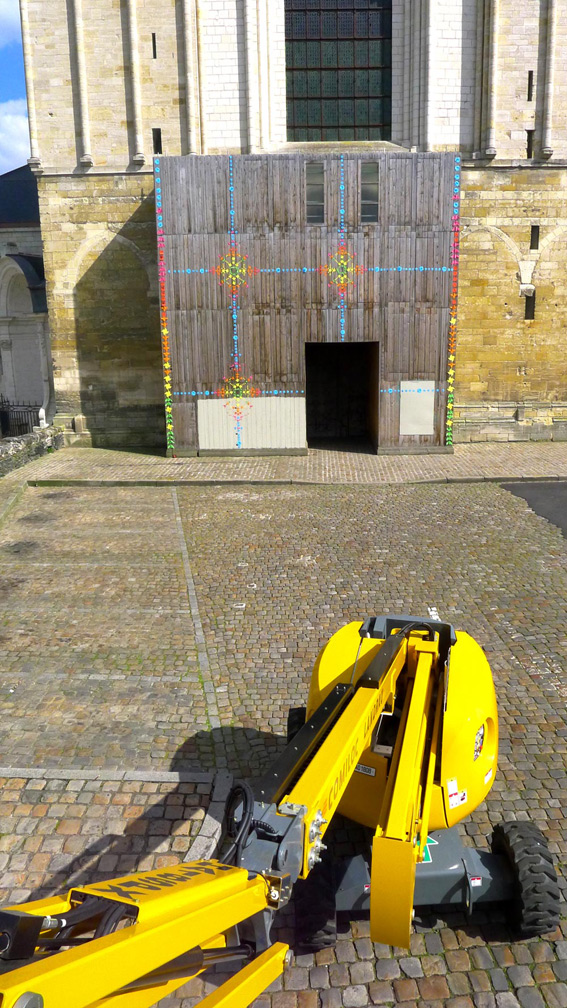 – If you were a president what would you change in the world?

ahahah…Hard mission.Reduce the inequality. Try to save the planet if it’s not too late.. And  put in a bin the notion of power and money. A lot of things are possible but you need to want the change.. Unfortunately because of the thirst of money and power of some men, they manipulate the people and are not really interested about put everybody at the same level…

Creation is a way for communication, transmission. What we show, people can like it or not, understand it or question themselves… So maybe an artist can give some positive energy, some hope, can denounce, try to make some changes for the happiness of everyone and for our world..
But finally we just remain a drop in an ocean but I think that everyone can do his part: the part of the “colibri”… (Pierre Rabhi) 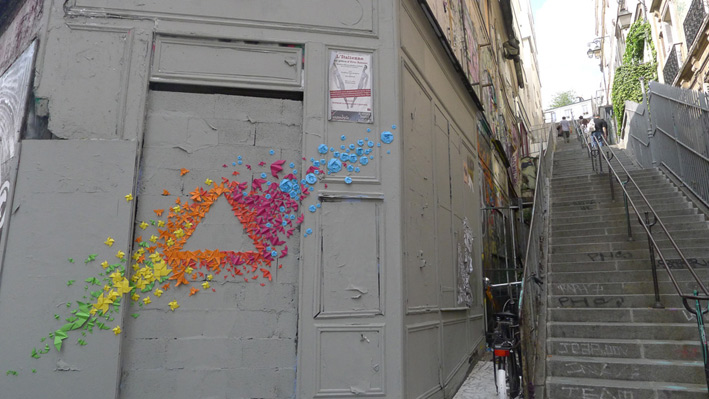 Yes, some solo and collective exhibition and some projects of Wall in Geneva for Emmaus, or in Corsica and some other surprises…

Thank you Mademoiselle Maurice, and please grant us one of your million wishes.