This Stockholm based street artist, uses famous cartoons and adds plenty of controversial humour. His work has gained great popularity in the last couple of years among the largest social medias and popular art websites. Find out how it all started for him, what inspires him. We bring you the artivist who manipulates Disney to amuse the adults – its Herr Nilsson!

(ISSA) – What do you choose to drink? Coffee, Tea, Beer, Soda or something else?

– Introduce yourself to us!

A couple of years ago my daughter’s favorite character in Pippi Longstocking was Herr Nilsson. She had him as a cuddly toy too and he was with us wherever we went. So I took his name and included him in my first outdoor painting. 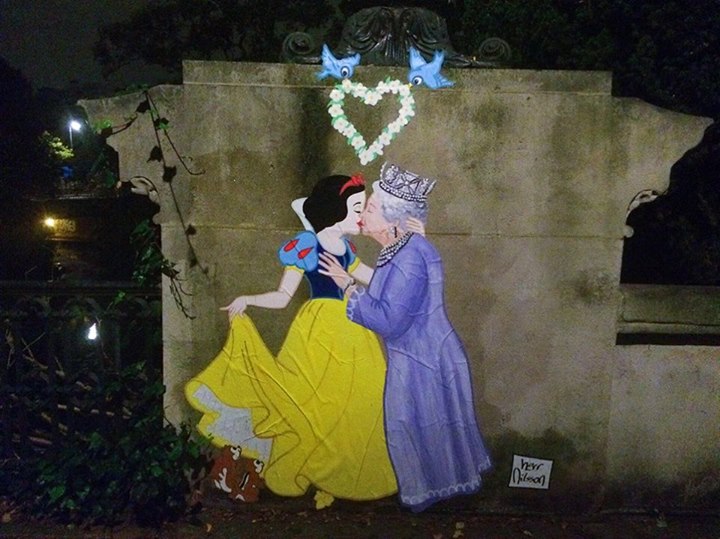 I got fed up with making paintings for exhibitions at galleries with stiff white cube walls and little crowd. I wanted to create stages or scenes in the real world where I could make the paintings interact with the environment and the people in it. 2012 I pasted my first painting outdoors and it created a scene where Herr Nilsson, the pet monkey of Pippi Longstocking threw a molotov cocktail with Pippi´s tail as a fuse at her yellow house, Villa Villekulla.

Nowadays I get a lot of attention for my paintings and they are spreading around the world when I post photos of them on my Facebook and Instagram. It´s a very nice way of making art: Free, immediate response and start thoughts and discussions between different people on Internet. I have also been invited to do art for some galleries around the world. This is very fun too but I have the best feeling on the streets.

– What is the first thing you do when you get up in the morning? 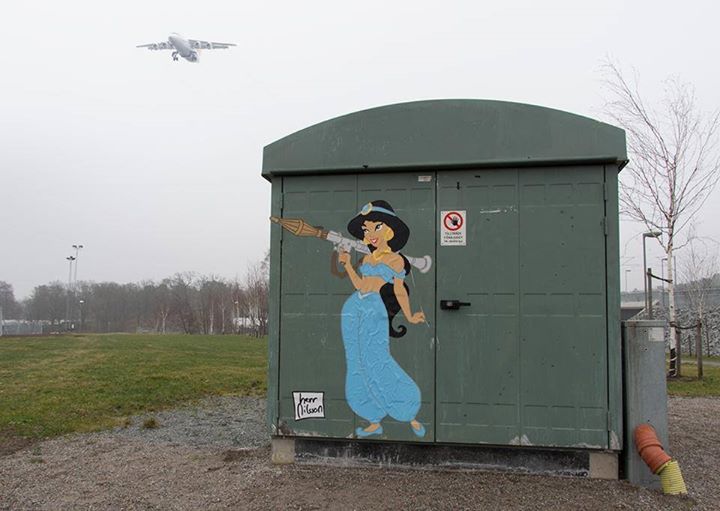 -In all forms of art, inspiration is crucial. What inspires you? -Do you have an artist you admire and what for?

I read a lot of newspapers and I´m very fascinated by the human behavior. How we are able to love and then a minute later hate and kill each other. Speaking of art I like the Chapman Brothers, the Fluxus movement and the aesthetics of cartoons. It´s hard not to mention Banksy when you are a street artist but I also like Pobel and Dolk a lot. I get a lot of inspiration from Lana del Rey’s music, texts and her artistic concept.

-Before going to paint, what is on your check list to take along?
I paint all my paintings on paper in the studio and then I paste them on the walls of the streets with different kinds of glue. The checklist when I do my street art actions is: the paintings in a roll, spray glue or wall paper paste, brush, masking tape, gloves, camera and my monkey mask.

-Which cities do you think are the most inspirational in Street Art?
I have seen a lot of great stuff in London. Stockholm is good but difficult because of the zero tolerance and 24 h rules of cleaning. 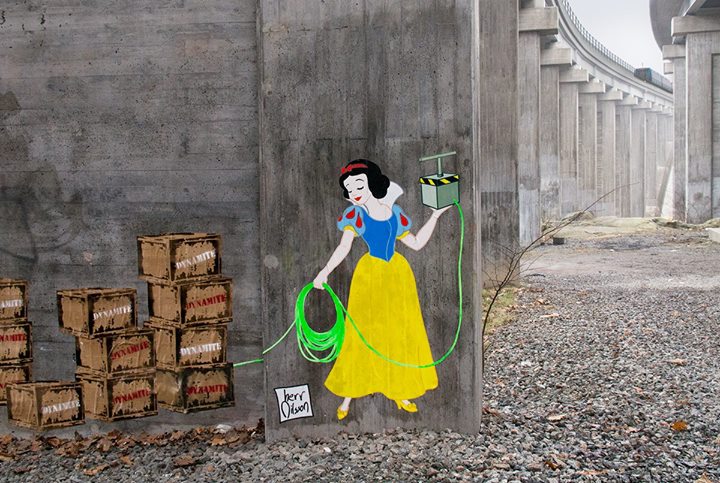 -Do you have other passions apart from art?
Football and floorball.

An outdoor installation on the moon would be cool.

I´m always looking for strong symbols and iconic images from the history and popular culture. Then I put two or more of them together to create a new strong meaning in conjunction to what I would like to communicate. For me the best art works are visually strong but then you realize several meta levels and conflicting meanings.

I always think ”you stiff, boring fuckers” but I know it only stays up for a couple of days because of the zero tolerance. If I haven´t got a good photo of it I get angry on myself not to taking a better night shot or getting up earlier to get it. 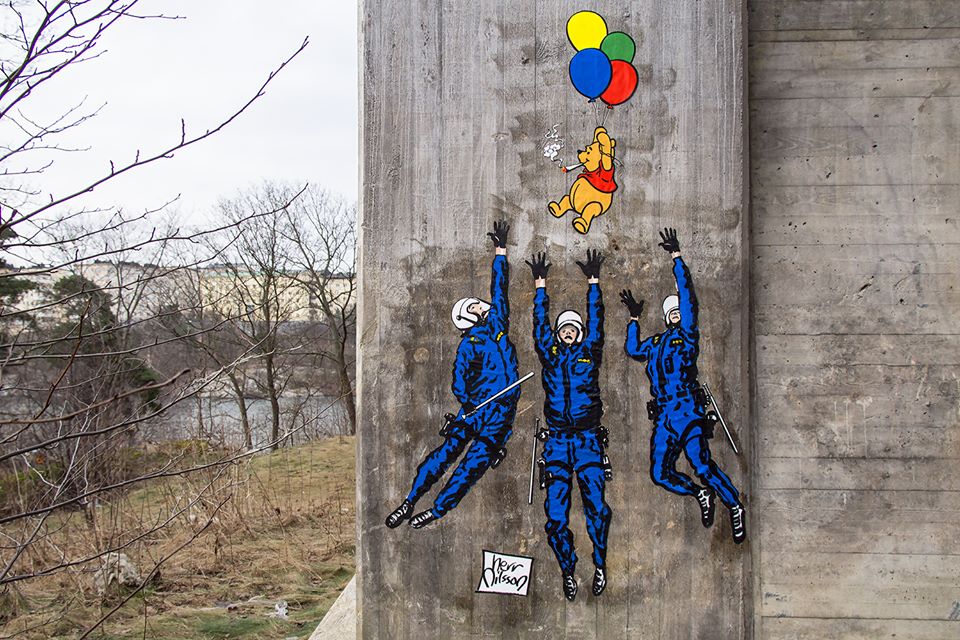 The people I have seen have laughed and then taking pictures or selfies of them.

– If you were a world leader what would you change?

I´m not a leader. Not so good at expressing myself in words. But I try to show the things I would like to change in the world in my paintings. Mark out strange things in the human behavior that I think could be worth an extra thought.

It’s been great to get to know more about the mind and person behind such talented and inspiring works. Thank you! 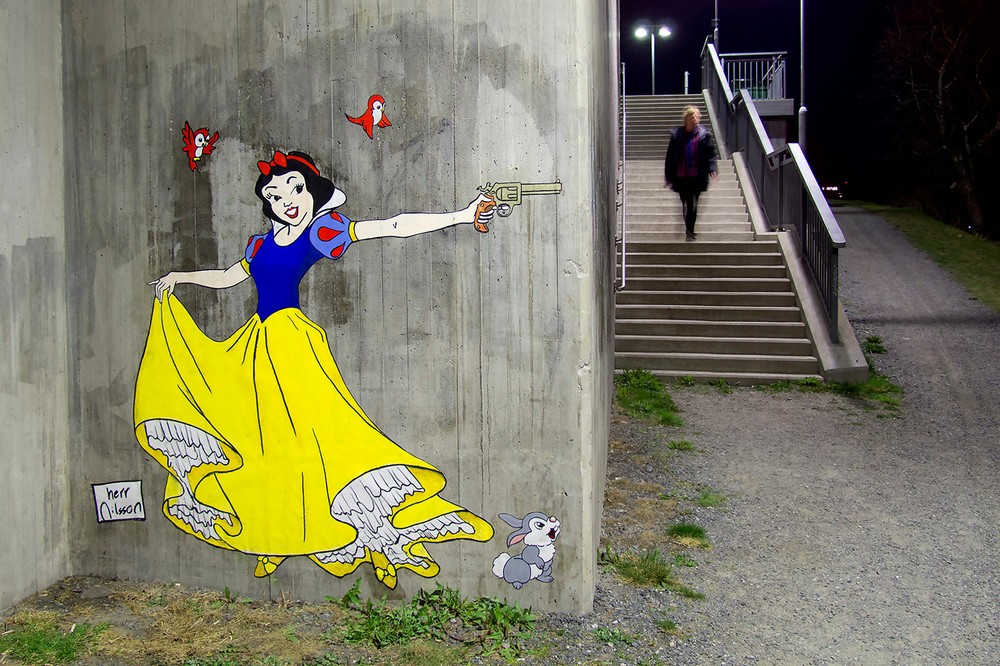