We are happy to introduce you to street artist Shadee K, who was kind to give us some of his time, saying a few things about himself and his work. This interview was made by and for I Support Street Art. We hope you enjoy it as much as we did! 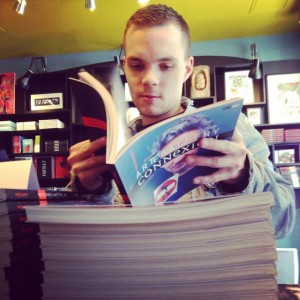 It comes from the fact that I was placed in foster care at the age of 3 ½ years in a Kabyle family, and “Shadee” means “monkey” in Kabyle. When I started tagging, I had to choose a nickname, I picked up the nickname that my Kabyle family had given me.

I do not know, I tend to define myself as a street artist, just like everyone else at the moment, after all, it is not very serious stuff, some people just categorize me “artist”, others “urban artist”, whatever. But “street artist” it suits me well.

I started graffiti and tag when I was 13/14 years old in Junior High School/Secondary School, I’ve always done it in fact. I’m from Le Blanc Mesnil (Editor’s note: a suburb of Paris), where we have a important tag culture for generations, and I followed the movement of the district. Even in my host family some members were graffers. My two brothers were among the first to join the graffiti movement in the 80s. At one point in my life I had a “break”, I stopped tagging and graffitis, I moved to Paris to join “les Frigos” (Editor’s note: Les Frigos used to be the storage of all the meat for Paris, now it hosts any kind of artists) and there I’ve been introduced to wheatpasting when I met Paella and Larrivaz.

Coffee, cigarette, I look on Facebook to see who have done some wheat pasting during the night, and I’m already thinking about the next drawing I’ll do.

I do not know, I would say Rap, rather parisian rappers La Scred  Connexion, that’s what I listen to most.

-In all forms of art, inspiration is crucial. What has inspired you to create so far?
This is essentially the world of video games, such as Sonic for the colors, and comics, and some cartoons.

-Before going to paint, what is on your check list to have with you?
“Do not forget the glue or the brush” … it happened to me (laughs), but I have mainly a freestyle approach, I do not plan too much. 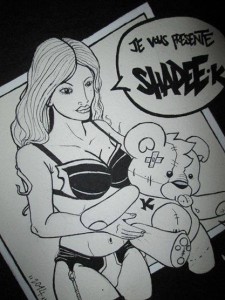 -Name 3 other artists you admire and why.
Paella (form “Les Frigos) because he uses a recurring character like Mr. Chat does, it is my artistic family. Béa Pyl  because she glue her puzzle pieces everywhere and she is very discrete; and finally Sara Chelou and Valerie Maho, in general I do not really like stencil, but they are doing well, I respect their technique and approach.

-Which city would you name as capital of Street Art and why?
Paris, and Lyon has his little sister, because there are lots of active people here, exhibitions, it changes all the time.

-What other passions do you have?
Football, comics, the cinema and theater.

A book, a biography in fact, with an exhibition, this is my dream kid. A book with all my drawings, coupled with expo, let’s be craz (laughs)

In addition to the Teddy Bear, which is my main character that I created for an ex-girlfriend, I often draw a little girl who sometimes torture the teddy bear. It is also an ex, but I really draw her. There is also a man with a cap and a big nose who is a childhood friend. In fact, my characters and my recurring symbols are all people who are or were part of my life. I transcribed my life drawing, so a bit hidden.

I think “assholes” (laughs) and then I said to myself “its okay”; and I ask myself do I wait a little or not before sticking another one here? 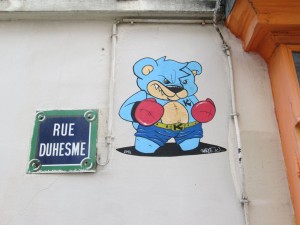 Yes I’m part of it because I come from graffiti and tag, and wheat pasting and street art is a logical evolution for me. Street art is two things, on one hand there are the “enthusiasts”, who do this for free, like freaks, for many years, and on the other hand, the “profiteers”, only interested in money. In addition to not be as good as they think, they are social climbers and often the ones less actives in the streets. But they spend their time bootlicking everyone in the exhibitions. Today the street art it is. In the future, one of the camp will win.

I wonder … weird question (laughs) but we need to redo everything again, the human rights, politics, law or finance, we should start from scratch. But we must first change the human mentality, I notice that it is the people who became fascist and not politicians anymore.

Thank you very much, keep it real