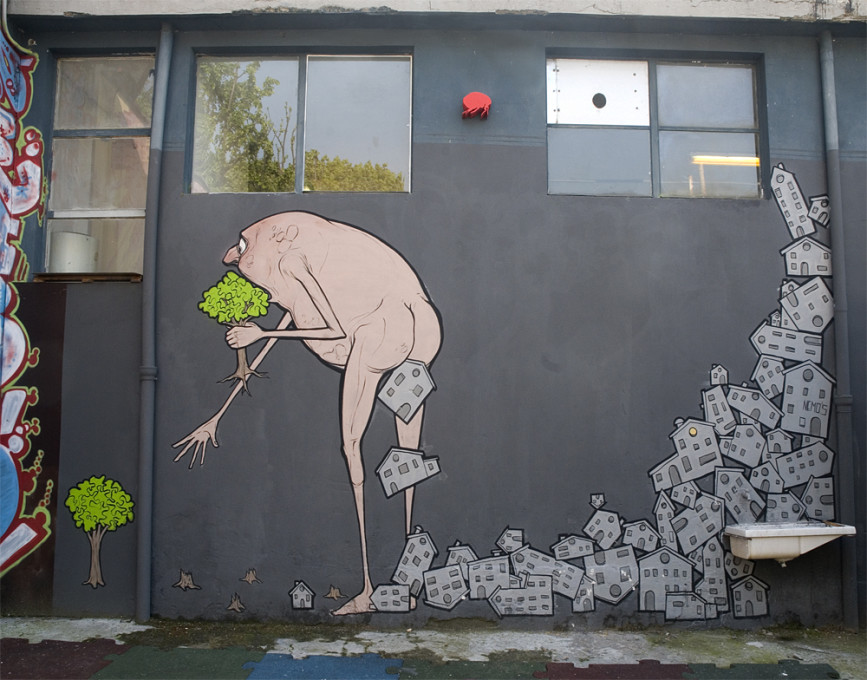 NemoS started drawing when he was very young. Thanks to his father one day he went to an exhibition of a local illustrator and this impressed him so much that from that day on he  never stopped drawing! When he began drawing on walls in the streets he needed to find a name for himself, better known as a “Tag” that would allow him to be part of this new world. He decided that name would be Nemo.
Nemo like the captain from “Twenty thousand leagues under the sea”, who fought battles against the war, the injustices in the world and the silences of the sea. Nemo like the main character from one of Winsor McKay’s first comic strips, in which he narrates the nightmares this boy has every night about amazing adventures in a fantastic kingdom called Slumberland. Last but not least Nemo like the latin word for “no one”. He added “’s”, the possessive case, because it refers to his art, so the translation goes from “no one” to “no one’s” and this completes the paradox of this way to identify himself. He started studying the best way to communicate a concept in a way that would reach everyone. He studied how to combine shapes and colors and eliminate every unnecessary element from his “narration”.

In his artistic career his technical approach had always been subordinate to what he wanted to express and to the composition of the image but eventually while  experimenting new techniques he found interest in colors and recycled paper and  found himself figuring out how he could “paint” his drawings.

His work is divided into essential and graphic images, with a social message and made up characters that carry out poetic and surreal actions like characters in who knows which fairy tale. Lately he has been joining the “paper technique” with drawings on social themes using this was of painting as a starting point for a new project and way to express things and that he hopes to accomplish this soon.