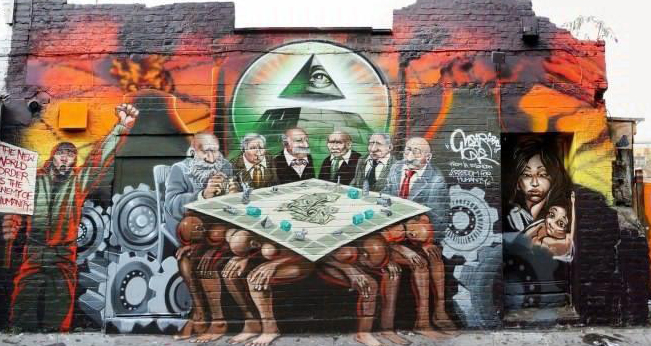 MEAR ONE (Kalen Ockerman, b. 1971, Santa Cruz, CA) is a contemporary American artist based in Los Angeles. MEAR ONE began his career in 1986 as a graffiti artist living in Los Angeles.

MEAR ONE has been labeled as “The Michelangelo of Graffiti” and “The Salvador Dali of Hip-Hop.” He is considered by many to be Los Angeles’ most prolific graffiti artist because of the way he revolutionized graffiti with his fine-art realism, breaking out of traditional 2D letter forms, and using perspective to develop complex characters with dynamic backgrounds in epic scale. By the early 1990’s, he had established a large fan base through his notorious work on the streets, underground hip-hop album covers featuring his iconic imagery, and his involvement in pioneering early street wear clothing and graffiti culture.
MEAR uses visual language to provide a critical viewpoint that exposes the history of corruption in America and the world at large. The diversity in his work often depicts an experience of transcendence in sharp contrast with depictions of the horrors of humanity, war, and oppression.