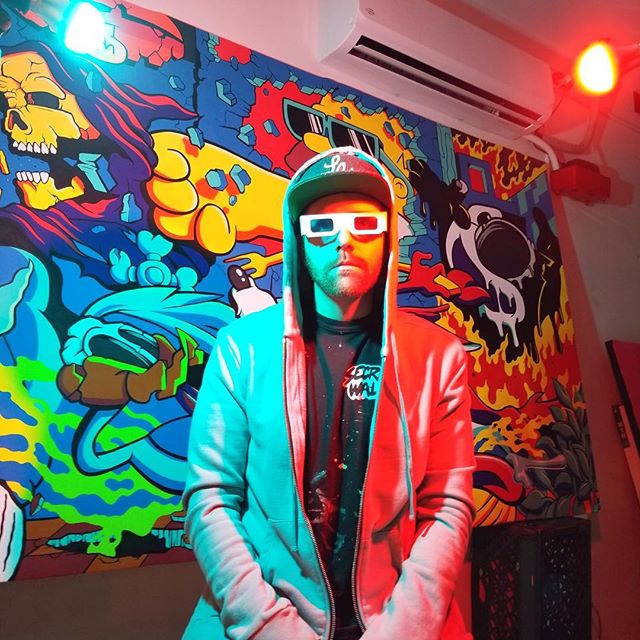 Matt Gondek is a Los Angeles Pop Artist who paints Deconstructed Pop Icons. He is based out of Los Angeles California. Matt knew instinctively that he was an artist at a very early age, creating his first work of art – a comic book – while still in elementary school.
He is still painting comic book characters, but these days, they are more often seen on the sides of buildings or hanging in a contemporary art gallery. His first real creative job was as a digital illustrator, creating graphics for licensed clothing for the music industry. His proficiency allowed him freedom, and eventually led to him opening his own clothing and art boutique on his 30th birthday. Unfortunately, he quickly realized owning a boutique wasn’t for him.
When the store’s one year lease was up, Matt closed shop and spent three months struggling with indecision and lack of direction. On a whim he picked up a paintbrush, inspired by a big stack of Mickey Mouse sketches he had begun for a freelance project. In one sketch Mickey’s head was exploding.  When he finished his first painting, he began another, and then another. At that moment he had developed his signature style of painting, and a few years later is still creating the deconstructed cartoon characters and fractured pop icons of our childhood.
Drawn to the clean lines, bright colors and accessibility of comic books, cartoons and video games, Matt’s skill lies in his ability to replicate the clean graphic style of digital illustration in his paintings. A self–taught artist, Matt’s creedo is “Figure it out as you go along.”  Now a successful international artist, Matt has certainly figured it out, securing large mural commissions in Hong Kong, Guadalajara Mexico, Toronto Canada, and selling hundreds of works in the last few years.  He has had many successful gallery shows across the US as well as Paris, Hong Kong, Singapore, and the UK.  His work resides with collectors worldwide.