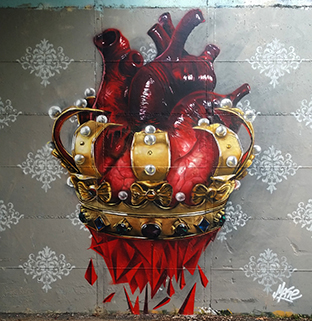 MATE, fascinated by the world of images in general the first approach with colors was almost by chance, coloring the walls of Milan. Over time it is interesting, looking for various means of expression, techniques and materials, enrolled at the Academy of Fine Arts of Brera with tempera, acrylics, enamels and oils on canvas, graphic prints, lithographs, serigraphs and airbrushes.

During my artistic career I mainly developed the technique of realism, with many details, which make the image and its meaning clearer. Starting from a technical approach and a use study and tiling of colors and shadows, I arrived at new techniques of use of sprays, which over time led me to create images with greater impact and less use of color and time, a personal style, which remains between the graph and realistic, that allows me to do great jobs in a short time. The meeting with the spray colors, and therefore the discovery of the graffiti world, was fundamental for my approach to the world of art, it was the means that has me allowed to express myself quickly and everywhere I was, on any surface, in different cities: Berlin, Magdeburg, Frankfurt, Antwerp, Brussels, Perpignan, Budapest, Bratislav, Vienna, London, Paris, Ljubljana, Gemona, Bolzan, Milan, Sao Paulo.

Over time I started using the drawing to try to send simple messages, understandable even to ordinary people, to people who are not part of the art world, who sometimes can not understand them. This begins a new artistic journey, in 2016, aimed at tackling contemporary problems and that concerns the whole world, with explicit and direct contents. So I started various ideas, I found a reading that allows me to keep the same style both on the wall and on the canvas. This allowed me to create large works and that are able to pass a message making them communicative and open to everyone’s understanding.