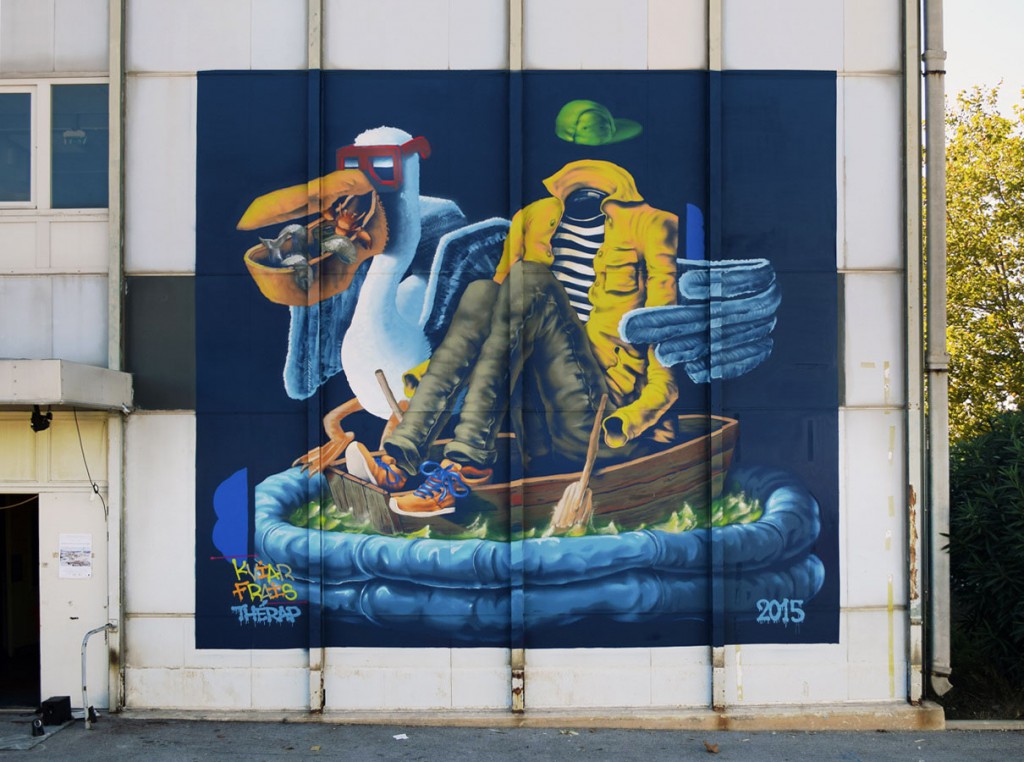 John Kviar was born in Sens (France) in 1986. He discovered graffiti during his youth near Melun (around Paris), where he grew up. In 2002, after drawing and tagging for a few year, he began to do graffiti on the walls of wastelands between Damarie-les-Lys and Fontainebleau. It was during that period that he met Frais, a now befriended artist collaborator, with whom he ventured looking for abandoned places to realize murals together.

In 2009 he created the artistic collective Thérapicturale with Frais, Cheipa and Simer – doing their first Collective’s exhibition in Seine et Marne. This was the stepping stone for Kviar’s phase to create characters in human-like but body-less form. This expressional characters started to develop where traditional Graffiti as an art form ended. John overturned Graffiti’s strict codes and invented not only expressive, but also very visual characters that liberated from all constraints prejudice. Gradually, he set the scenes with his friend and artist collaborator Frais and imagined situations both surreal and poetic.

After various artistic interventions in île de France, Toulon and during his trips (Greece, Croatia, Italy, United States …), he put up a duo exhibition entitled “Places of being” with Frais in the Petit Lieu de l’Art Contemporain. Together they focused on taking the viewer into a world populated by characters of which there seems to remain only the clothing envelope. Guarantor of the social relation, the clothing symbolizes human presence while leaving the puzzle of what is happening inside: ” we can be somewhere or with someone, but that does not prevent us of also being elsewhere, think of ourselves differently and dream of other things.” These empty clothes are mainly an invitation to project, allowing the viewer to settle in this setting and let the senses emerge.

Over the last few years, Kviar set his stories in oil on canvas paintings. By freeing himself from any distinctive human character traits, it imposes through his characters true identity both unique and amazing.