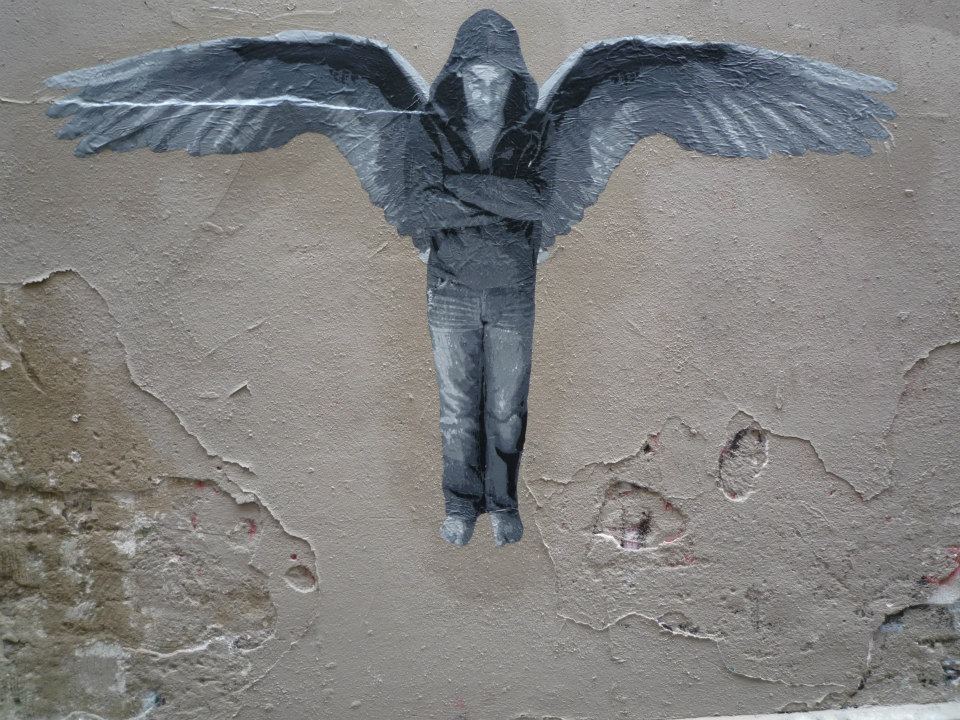 Ender is a French artist living and working in Paris. He spent 25 years in the infamous Quartier de Belleville (an area where street art was omnipresent in the Eighties) where his influence was made. A professional actor for the last 20 years, Ender is a recognised street artist using mainly stencils and paste-ups. He explains pastes ups are necessary as the 3 to 6 layers stencils he uses would be difficult to spray paint (spray painting in Paris being an offence and punishable by Law). The other reason being that paste ups have an ephemeral lifespan: Once pasted up on walls, they surprise the passers-by and then disappear either by way of removal by cleaners, stollen by collectors or simply destroyed by rain, snow etc… The destruction of the work is also part of its existence.

Ender says: “ Being a street artist is similar to being an actor, my works portray people, scenes, theatre. I have to create a scenario to give a meaning to the stencils. Once the work is pasted up, it might be short lived. It becomes property of passers-by who will (or won’t) look at it. It will be ripped off the wall, stolen sometimes or buffed but I hope it will have put a smile or an emotion to whoever looked at it”.

Ender has various themes he prefers:

Mariolles (cheeky kids) are childen (photographed by Ender) sticking their tongues out. Cheeky and playful, they remind the passers-by of their own lost childhood.

Gargoyls or Chimera, the mirrored fantasy of Mariolles: they are moody, dreamy, sleepy creatures… wrongly called demons, they also have their feelings.

Re-creation of classical pieces : self-portrait as Persee holding the Medusa’s head, Artemis and his golden bow, the Cascina battle, portraits of Da Vinci… Ender shows his love for classical history and events.

Ender also work on multi-dimensional support he creates – using wooden cubes. The spectator has to move around the work to discover double portraits. A clever optical illusion linking the work, the people portrayed and the spectators.