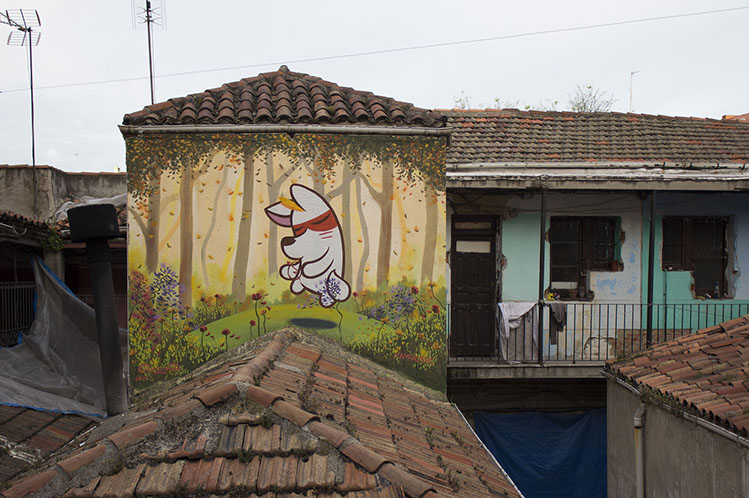 Dingo is a character represented in the streets that shows the alter-ego phenomena, a persona split up to play its second self. As an end result of experiences and influences, have taken years to its final modeling.
The first sketches emerged from a desk in the summer of 2008, although they were very different to as they are now. Chosen a dog for being the favorite animal of the artist and a dingo, because it´s stand out of common dogs. This character arises from the need to create a visual image of it´s creator, as an unreal physical idealization of itself. That is in principle. As time passed by it is has been reapplying to have its own personality as if it were a living animal. Still today this is located in a mind-frame that sometimes is seen as an external way and others not.

The influences come mainly from graffiti artists as: Jace, Flying Fortress, may watch you, Murphy or Max 501, focused in the creation of iconic characters, normally called “kekos” (spanish slang for graffiti characters), which normally decorate the pieces on walls, although they have subsequently spread into other artistic-philosophical currents: the naif aesthetic, that claim the people´s child character that normaly is lost as time pass by , not to desappear, japanese culture in relationship with its extravagance, classical painting as the English landscaping and above all surrealism.

Inside the main line of work, the representations which are shown both in walls and canvases and other media not only invite to a detailed contemplation, it also invite you into a space for reflection. A space that even if is constantly talking, projects silence and meditation. A meditation to know oneself where he reflection of the everyday life, love and disappointment, joy of living and disenchantment.

At the moment the road follows that way. Son of a surrealist painter, Dingo will remain surrounded by the oneirics.