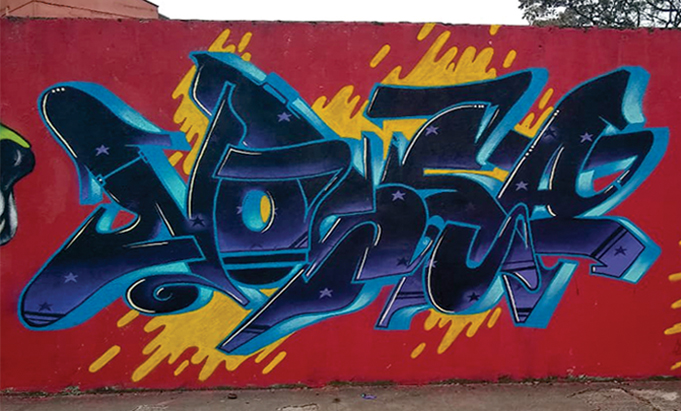 Daniel Duarte Costa – Brazilian born artist, 32 years old, of which 19 years I am dedicated to Graffiti “Urban art” in these years of dedication I created a work name, common “OUR”.
I work as a graphic designer on a graphic during the week and with graffiti as decoration with both T-shirts and exhibitions and making artistic demonstrations in various districts throughout Brazil.

I have already organized events for the CPTM – Metropolitan Train Compound of São Paulo, both inside and outside of the stretches of the lines, such as the inauguration Calmon Viana Cal5a with a space to give a new look to the walls of the energy courtyard of CPTM , a graffiti show at Braz Station, a CD release by Michael Jackson’s Sony Music, a pilaster painting at Tatuapé Station and two events in honor of an artist.

I participated in projects by the São Paulo City Hall as an open-air gallery, sports tour, painting on May 23, Project MAR 1 and 2 promoted by means of a public announcement among other events sponsored by the Secretariat of Culture of São Paulo, prefecture and sub-prefectures , both from São Paulo and from other cities in the interior, such as Tatuí, São José dos Campos and Limeira.

I worked with large companies and magazines using graffiti with decoration and works using the graffiti technique to do it, such as, decoration of Shopping Tatuapé Garden and magazine Casa & Decoração with two works of decoration of environment, external painting of phobbia among other major projects.