An artist at heart since a young age, Stoul is driven from different passions . Her work is featured in galleries and other exhibition venues in France, Turkey, Belgium, Spain, Italy, USA. We are proud and excited to present this interview with one of the greatest female artists of the street art scene.

–      Hey there, please introduce yourself to us.

I”m “Stoul”, painter on any material and from time to time in the street. I paint a universe populated by female characters, catwomen.

Stoul is a nickname that was given to me during my studies at Boulle art school, but it is also an anagram of Lotus. As my characters are, it seems, “magnetized” I just invented a word there right? (Laughs) and as I love the symbolism of the lotus, and although it fitted me well I kept Stoul.

“Peintresse” / street art. Urban art has become a movement, even if I do not come from the street, I think I found my family.

Since I was a child I wanted to be a painter, I learn the technic at the Boulle Art School, and then in the early 2000s, I developed my own universe, initially populated by small cats, and over time, the cat turned into a woman. I tried many materials as I was discovering and meeting with other street artists and graffiti artists, who took me on their playground. 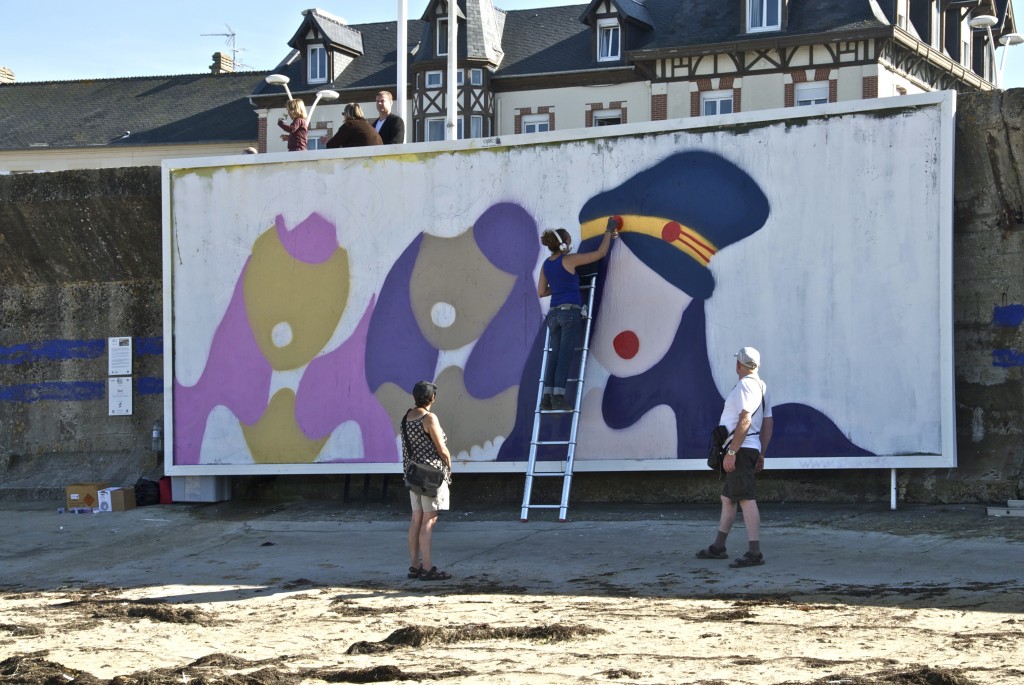 I give my son a bottle, tea and I smoke a cigarette

It is difficult to find a single artist because I’m so eclectic, I have a lot of influences. I always work listening to music, my playlist is huge and rotates randomly. An artist should mix it all to make it fit me. Lately I listen to a lot “La femme” (editor’s note: French rock band). It motivated me a lot on my latest works

-In all forms of art, inspiration is crucial. What has inspired you to create so far?
Everything inspires me, travel, cinema, but also a lot of fashion and its designers to dress my characters. I mix current trends and styles of past eras. Right now, I have an obsession for origami and it turns into geometric abstract. I am in transition for a year. My characters are now moving in a triangular world.
-Before going to paint, what is on your check list to have with you?
Bombs, brush, black ink, caps, gloves and my mask, and then a pot of glue and a brush for collages. And of course, my friends (laughs).
-Name 3 other artists you admire and why.
FKDL with whom I exchanged a lot lately and I really appreciate his work. Then, Takashi Murakami because he is a jack-of-all-trades using any material and this is what I’m interested in his work, and his cheerful side as well. And finally, Quentin Tarantino, because he creates strong female characters, super-heroines, his universe is fascinating, I would like to party with him (laughs). 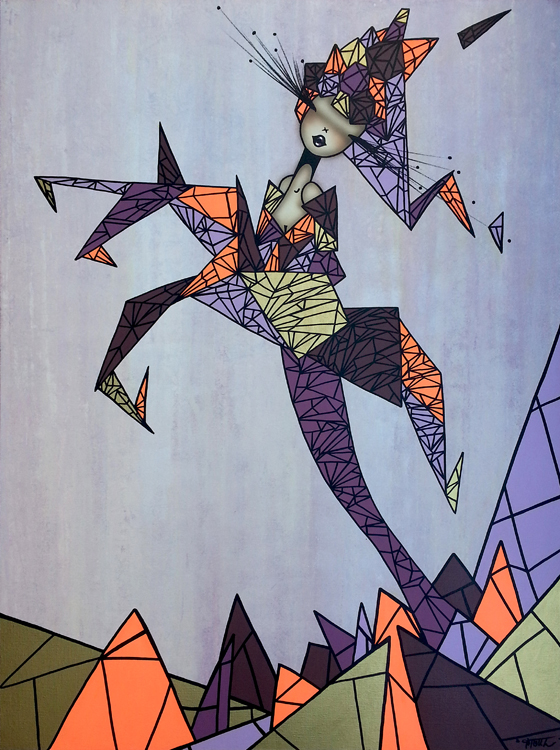 -Which city would you name as capital of Street Art and why?
Paris, because it is the city I know best, and I have a feeling that when talking about street art, not graffiti, there is a lot of things that were born in Paris, a lot of artists’ precursors and activists act in Paris and its suburbs.

-What other passions do you have?
Cinema, I devour many movies per week (laughs).

Go around the world, paint wherever I go with my crew

There are a lot of recurring patterns (laughs), there are always women with long eyelashes like the whiskers of a cat, a nose chin the shape of a X, and small cat paws. It’s femininity, gentleness, beauty of women. There are also patterns, now is the triangles, but also vintage ornamental patterns inspired by nature, animals, or tribal decorative ornaments that I’m doing stencil, collage paper or cloth etc. So… This time it’s triangles, suddenly, my characters become futurists

I’ll fix it, I want to over paint it, but all depends on who the vandal is, as a general rule, my street artist fellows are all lovely (laughs). 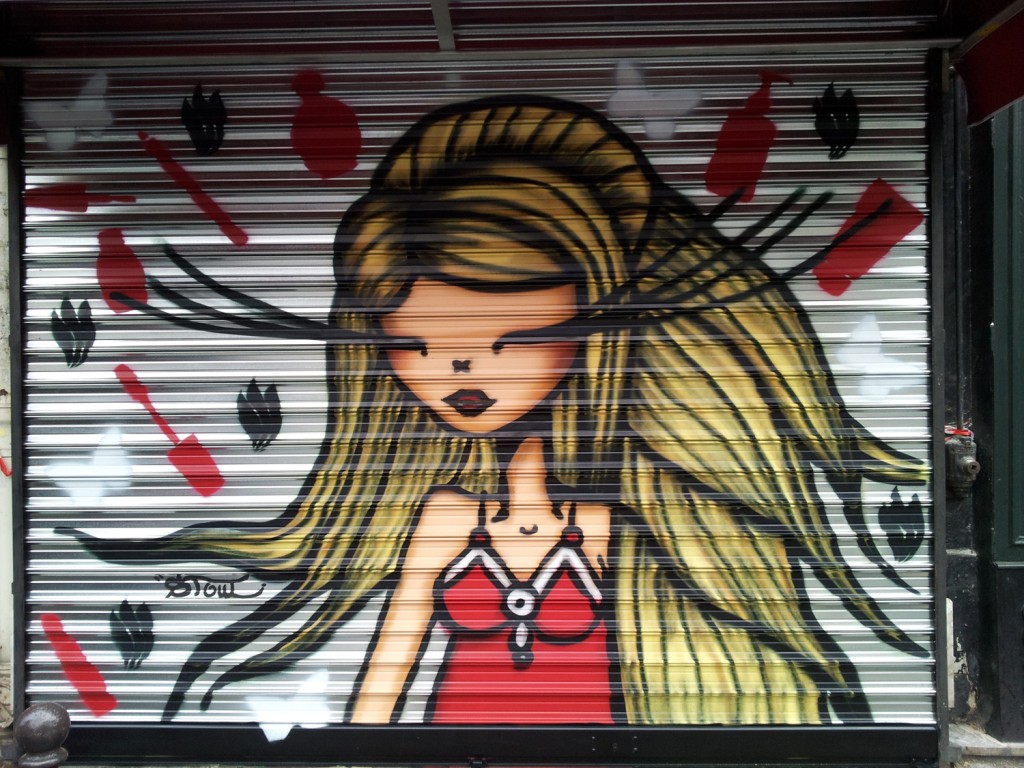 I think I’m part of it because someone opened the door for me saying “come home, come and welcome you” this is how it happened. Street Art is part of the Urban Art which is THE artistic movement of our time and will be part of the art history books. I do not think we will forget it. As for his future? I would like to know (laughs). On the Moon?

No more suffering, famine, disease, wickedness but it is a prerogative of someone who has magical powers there, not a leader (laughs). I would change the past, make that industrialization does not cause ecological impact. And…Yes, that money does not exist, or that everyone is rich (laughs).

Kisses to the 7MR family

Thank you so very much, Creative regards! ‘’I Support Street Art’’ team.

Check out more of Stoul’s works and info here. 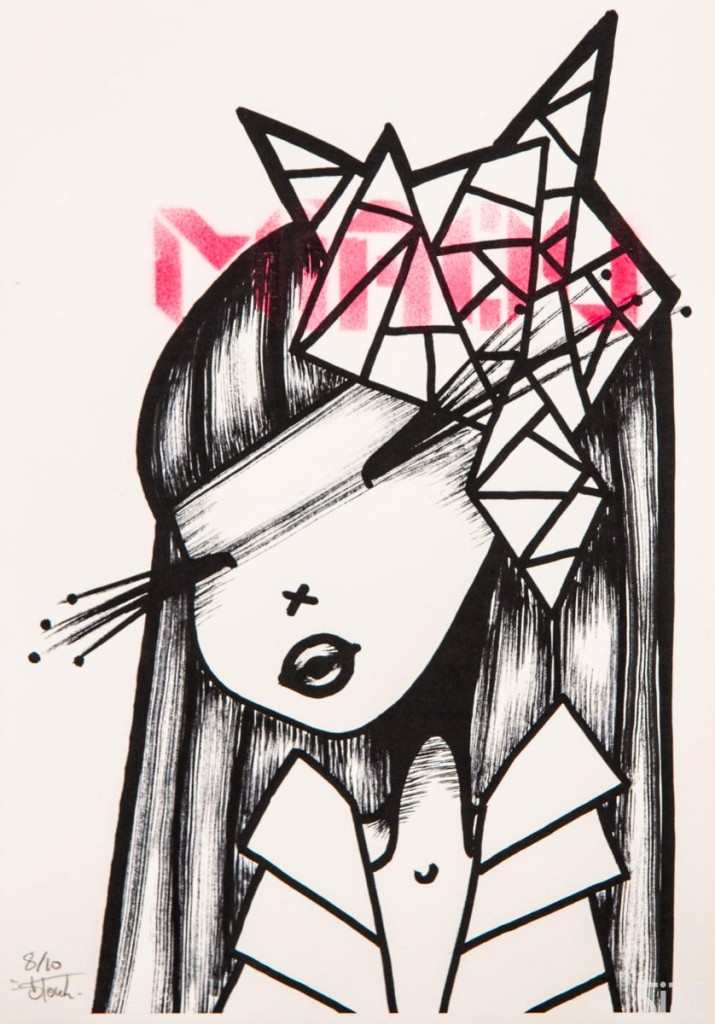