Nick Walker – talks about himself & Vandalism

This week we speak with a legendary ”Vandal” of the street art scene who ‘s been around it for a while now, making this interview even more special.  Nick’s work has become a blueprint for hundreds of emerging artists, including Banksy. His work is constantly evolving and remains innovative, modern and thought-provoking. Hope you enjoy reading this as much as we have!

– How did it all start for you, and what has it turned into nowadays?

I grew up in Bristol, and pretty much got into graffiti in the early 80s, I was obsessed by the trains I had seen in NYC and loved the references to the popular culture at the time. In the 80’s I was more focused on  the New York  graffiti styles and my style very much emulated this. Growing up in Bristol was a fun time,  there was and still is a really good music scene there. In the middle 80’s it was a really great place to live. It still is but has less of an underground culture going on. Back in those days we had the Wild Bunch and a load  of reggae sounds systems. It was a really creative place to live and back then there was only a handful of graffiti artists at the time so we all knew each other. One artist was 3D, he kind of inspired me to pick up stencils. At the time I was into a more conventional freehand style and what he was doing  was totally new to me. He started using stencils painting Robert De Niro images and stuff.

I was like ‘What is that?’ ‘What are you using?’ At the time  a lot of us kind of dismissed it because we were all still into the NY styles but in the 90’s I thought I would experiment with stencils myself – Not to purely use stencils but just to  mix it in to what I was already doing and that is pretty much what I still do today. The scene today is entirely different  – so many new styles  – its very eclectic and far removed from the early days graffiti. The culture was quite hard to access back in the day too especially if you were an outsider – or not an artist as such and journalist would have to dig hard or the artists would make contact themselves with their own detective work .These days because of the internet everything and everyone are a lot more accessible – people can be reached at the press of a button. We live in a world of sharing, following and immediacy so I can paint a mural and you can see it the second it’s finished even if you live the other side of the world to me. – Crazy! 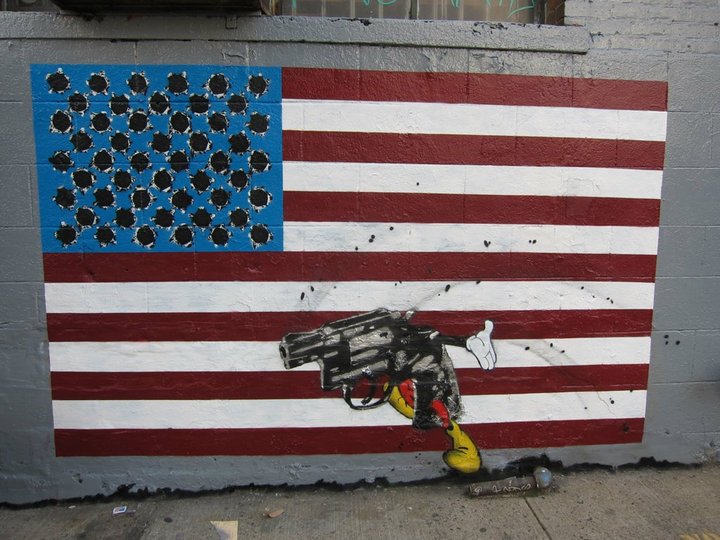 Get a coffee and go swimming.

I’m like a sponge  – anything and everything can inspire me  – for example the colour scheme on a pair of socks my daughter bought me for Christmas one year. I look at a lot of textures too whether it ’s paint flaking revealing whats underneath to the ways that metals rust.

Before going to paint, what is on your check list to take along?

-Do you have any artists you admire and on what basis?

-Have you had any trouble with the authorities while practicing your art? 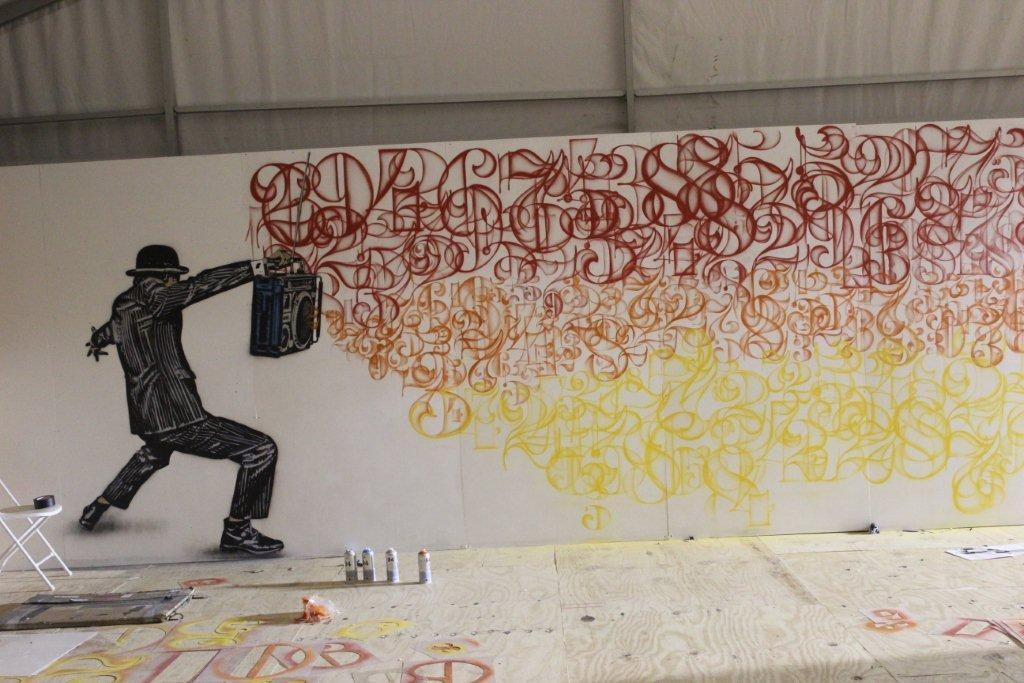 -Which cities have been the most inspirational for you?

New York has always been crazy inspirational – the maddest things happen there, always have done.  To me it’s always been the birth place of graffiti art which is what pulled me to that city originally but it’s the mad unexplained stuff that keeps me wondering. I think it’s also the energy of the city that keeps inspiring me.

Swimming. I think if I wasn’t doing art I would have a job that kept me in the ocean most of the time exploring and looking for unfound species.

-What is the wildest project that you wish to achieve some day?

-Does your art include symbolisms, messages or repeated patterns? What do they represent?

More so now that I am painting my numbers more. My theory on the multiple overlapped numbers is that without  numbers there wouldn’t be anything. Numbers are a part of our whole existence. The date we were born, the time, weight, measurements, money – everything is structured in numbers. 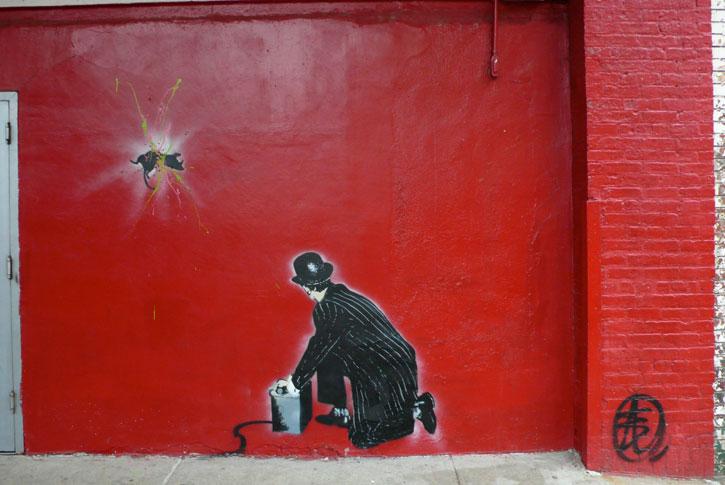 -How do you react when you realize someone has vandalized your work?

That shit SUCKS!! for the first moment I see red mist and my vision is clouded with revenge. on second thought ( more reflective) i realize that it says more about the person who has done this to my work. There is a sadness felt for this individual about the hurt he feels day to day inside himself.

-What reaction do you aim to get from viewers, when they see one of your works on the street?

Any reaction is good. If they walk by and they are loving it or enraged by it then thats all good either way I’ve produced a piece of work that has evoked a reaction and ignited some passion inside the spectator. If people just walked by and they weren’t engaged in any way the painting itself isn’t clicking. 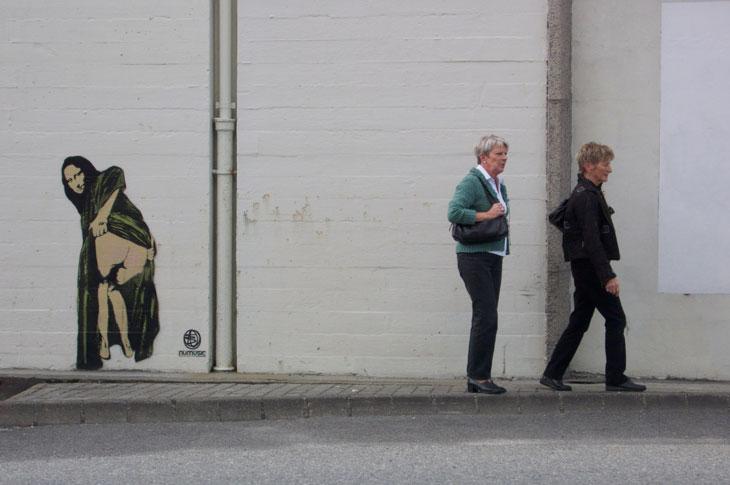 – If you were a holy spirit what would you change in this world?

– Homelessness.
-What are your creative plans for the future?

Move on with some new ideas I have brewing. I have a solo show in Hong Kong this September and this will show case some of the most intricate stencil work to date. I’ve got a new figurine to work on with Royal Doulton (see below) and  I hope to be painting some large scale murals too in 2016.

– Thank you for your time Nick, we wish you lots more creative moments!
‘’I Support Street Art’’ team. 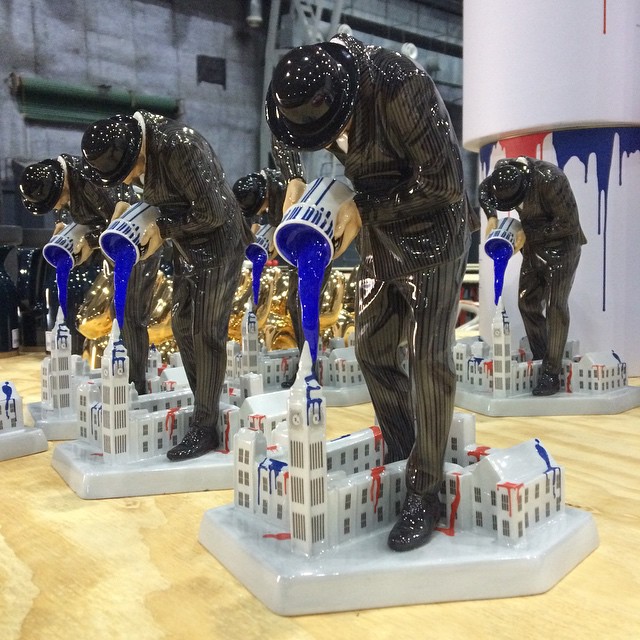 We would also like to thank Carolyn Irvin at ”Issa PR” , for making this interview possible. 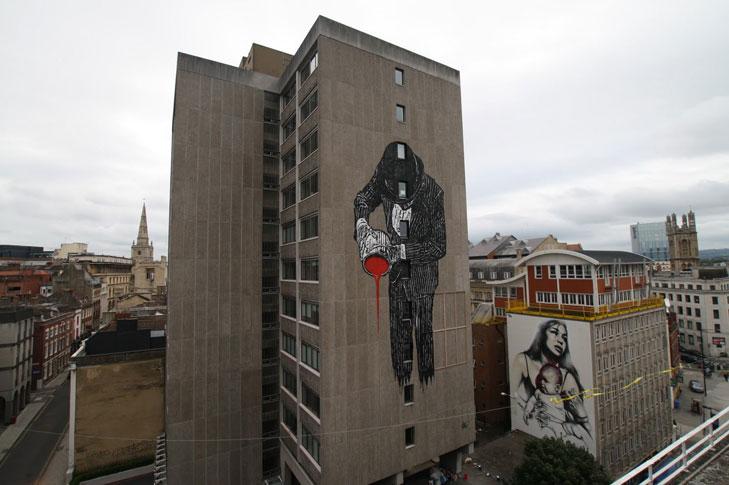