This festive season, we bring you a special Interview with prolific street artist: M-CITY! His works involve piecing together hundreds of detailed stencils to create imaginative cityscapes. He prefers abandoned places for his art and is especially intrigued by industrial spaces and their surroundings. Find out more about the original character and works by one of the worlds best known street artists, who also happens to be a professor, an off road enthusiast, a curator and a cat lover! Enjoy the experience… 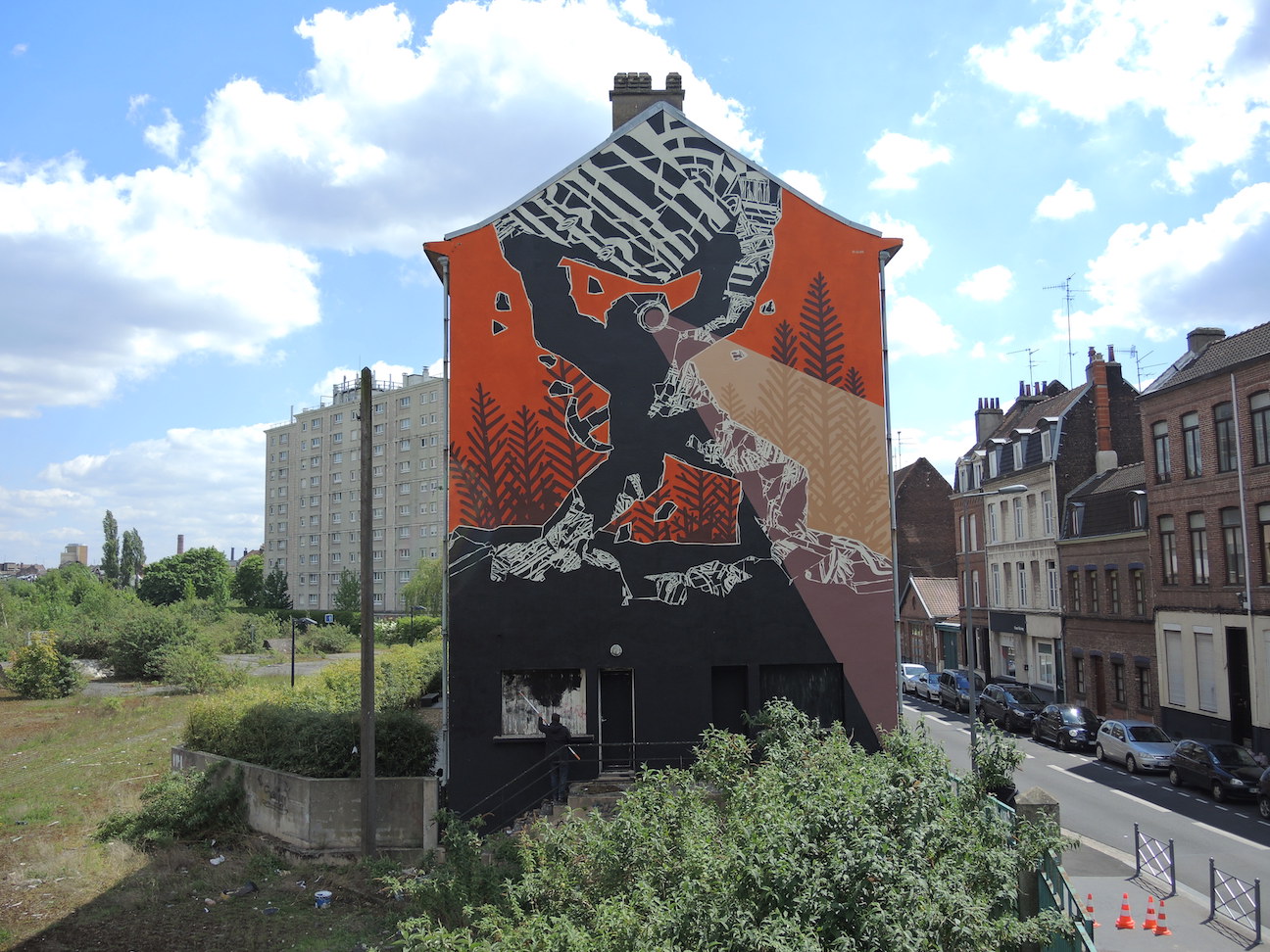 (ISSA) -What would you like to drink? Coffee, Tea, Beer, Soda or something else?

(M-CITY) – Mostly beer, but not every day. Usually tea. And of course water like a animal.

-Introduce M-city to us, as if we had no idea who he was!

Βorn in 1978 in Gdynia, Poland. An Associate Professor at the Academy of Art in Szczecin, Poland, where he runs a Studio of Image and Street Art as part of the Faculty of Painting and New Media. MA and Ph.D. defended at the Academy of Fine Art in Gdańsk, Poland, between 2008-2014 he was an assistant professor at the Studio of Painting run by Prof. Jerzy Ostrogórski, between 2010-2013 he run a Studio of Graphic Design at the Faculty of Sculpture, Department of Intermedia, then between 2013-2014 he was an assistant professor at the Studio of Painting run by Prof. Henryk Cześnik. He is engaged in the art collective Wiosna Ludów [Spring of Nations]. After its reorganization into the Space of Art WL4 Association he became its chairman. The Association was created to ensure artists the space for their individual work, to create the space for artistic exchange, to present, discuss and animate a local artistic and cultural scene in Gdańsk. Except for his academic work, he does graphic design, creates installations and large-scale painting. As a muralist, especially as an “m-city”, whose style has become his characteristic, Mariusz Waras is recognized as one of the world best-known street artists. From the very beginning, he has created his works around the urban aesthetics, used the elements of architecture or industrial infrastructure – including the shipyards and means of transportation. His style, even though it evolves, remains modest and strong. Among the dehumanized landscapes and machines painted during the process of production or destruction, in his play with the limitless possibilities of compilations in an ever-broadening lexicon of elements, he started to find place to express his personal reflections, manifests, sometimes laconic comments on actual events – a wink towards one of the sources of street-art. He is also a curator of exhibitions and art events.

-Where does your Artist name come from?

Exactly, M-City is the name of the project, not my alias. Initially, there were classic stencils which were some sort of form enclosed in squares and rectangles. But from the very beginning it was an industrial theme: factories, chimneys etc., because I had such views out of my window: shipyard, elektrocieplownia which was covering the closest area with smoke. I often visited the shipyard and watched ships that were constructed there – all thanks to my father who worked there. So the M-City project originates from shipyard environment. Additionally, it derives also from PC games. I had the chance to build boards for board games on 8-bit computer. We were creating a symbol system, symbols to create a board upon which a character was leaping from one to another. These were the elements which allowed for creating potentially unlimited composition in opposition to stencils. A stencil is something that you can place and paint in one or the other place but it still functions as a leaflet, poster, sticker. Here, we had an idea of something that was growing.

-How do you define yourself and why? Artist? Street artist? Something else?

Its hard to say. I think Im 50% an art teacher and 50% artist. Of course my roots are in the art school and the street at the same time. 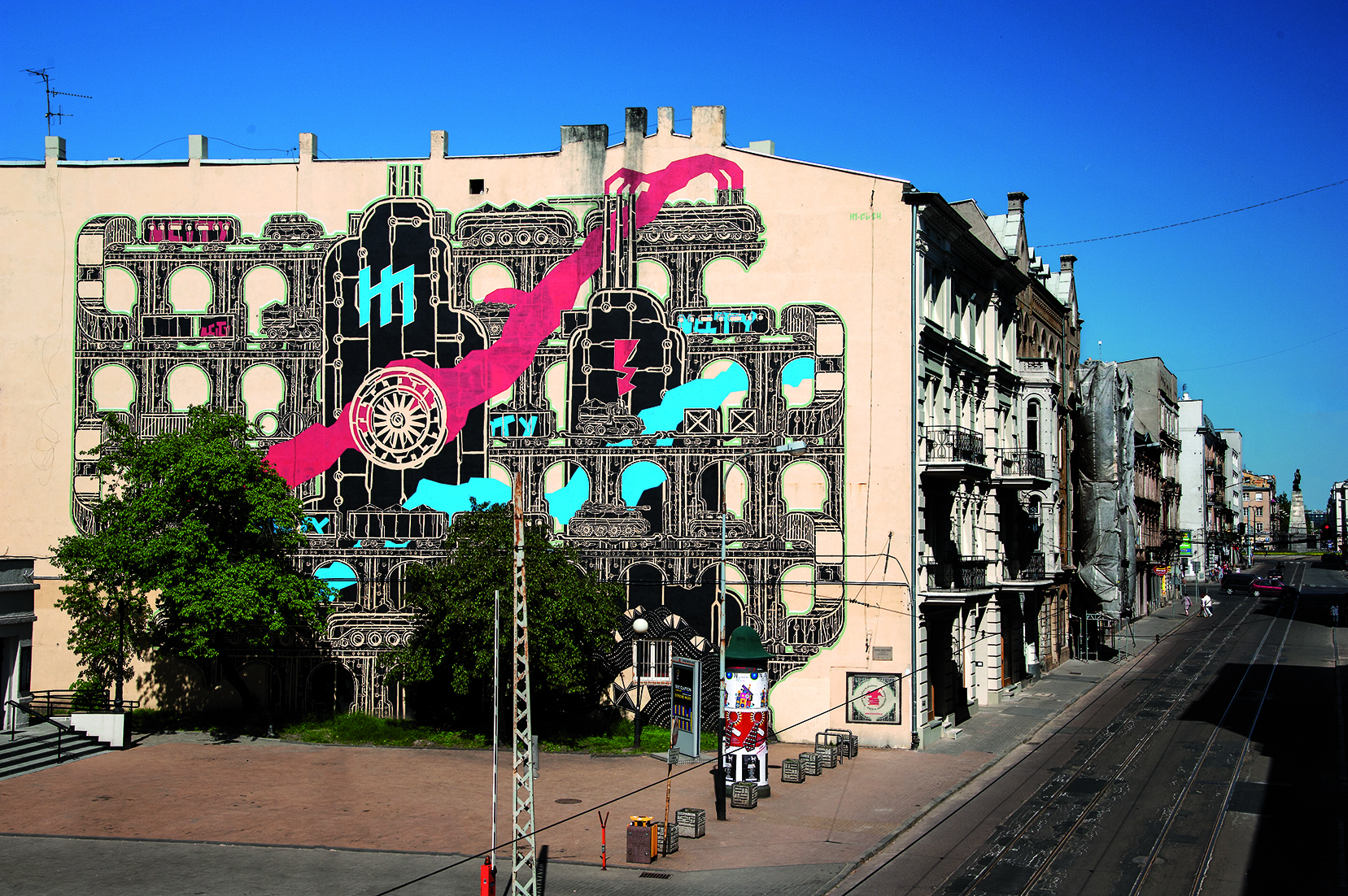 My first steps? My initial fascinations began in Secondary School, maybe even in Primary School – somewhere around housing estates there were a lot of punk and anarchistic wall paintings, many of them conveying political messages. It was quite visible on the street, it drew attention and had interesting stylistic. You walk, look and notice it.

Artists never wake up in the morning. It’s a process. Usually my two cats jump on me. After I feed them my brain starts working. I haven’t got a calendar or something. Everything is in my head. So this is a brainwash I need to do first.

-Street art is mostly a visually stimulating form of art. To add one more sense to it, what music would you pick to accompany your art work?
I prefer silence or city noise, not the sound. Specially when I working on a wall. I never have phones on my head. The main place where I listen to music is in my car. I drive every month 3000-4000 km. So a lot time in the steel barrel. 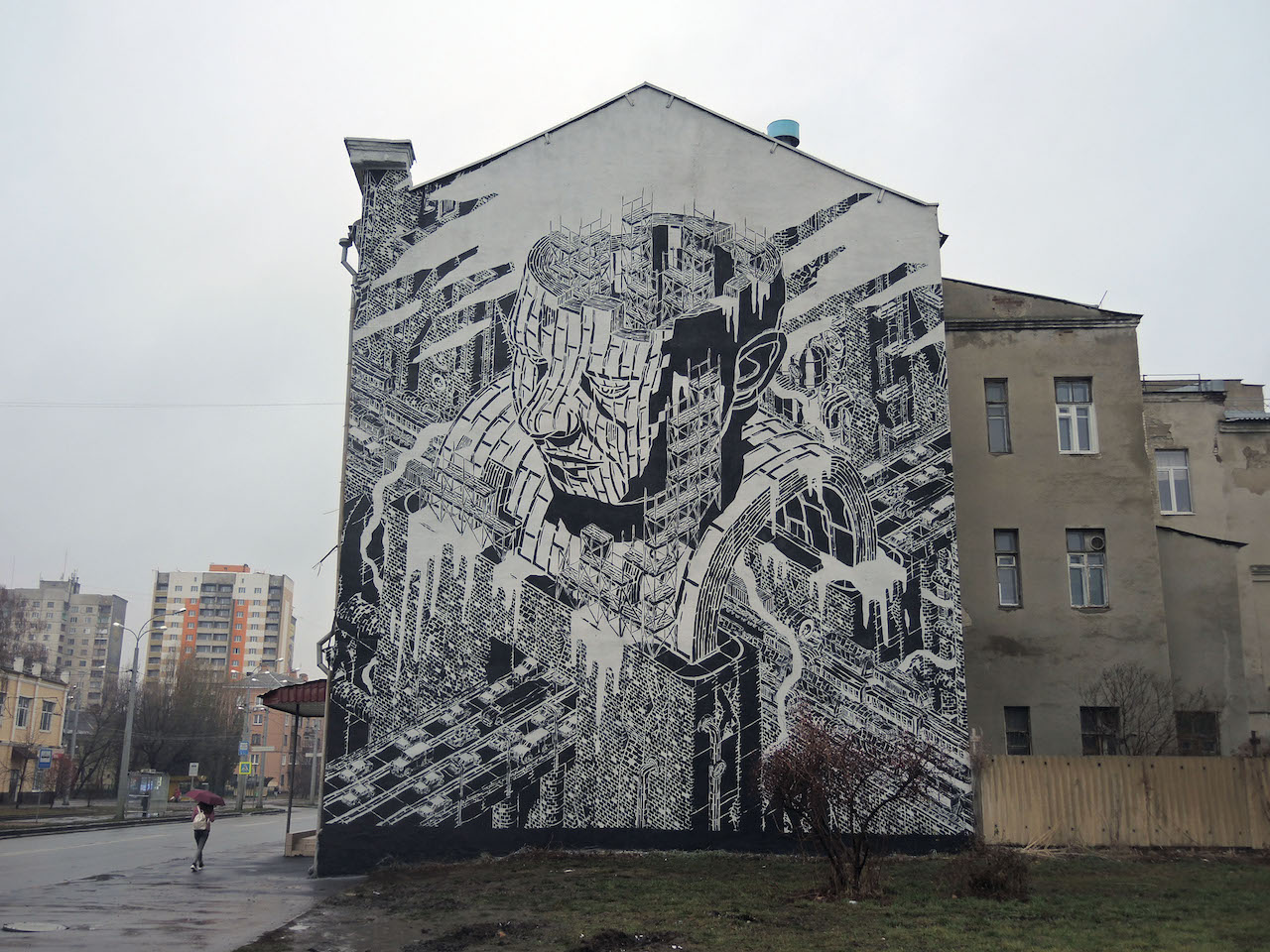 I think main inspiration is travelling. If you see many different places, people, culture you see more generally. Not only your closest area around your house or city.

-What is the hardest part while working on a piece of art?
Most hardest part is a sketch where I try to find ideas, the rest is a physical job. Especially when you are working with stencils.

I will find something interesting everyday. I never stop on one artist. So I cant give you a name. Also in my work, where I work with students, it gives me a fresh eye. 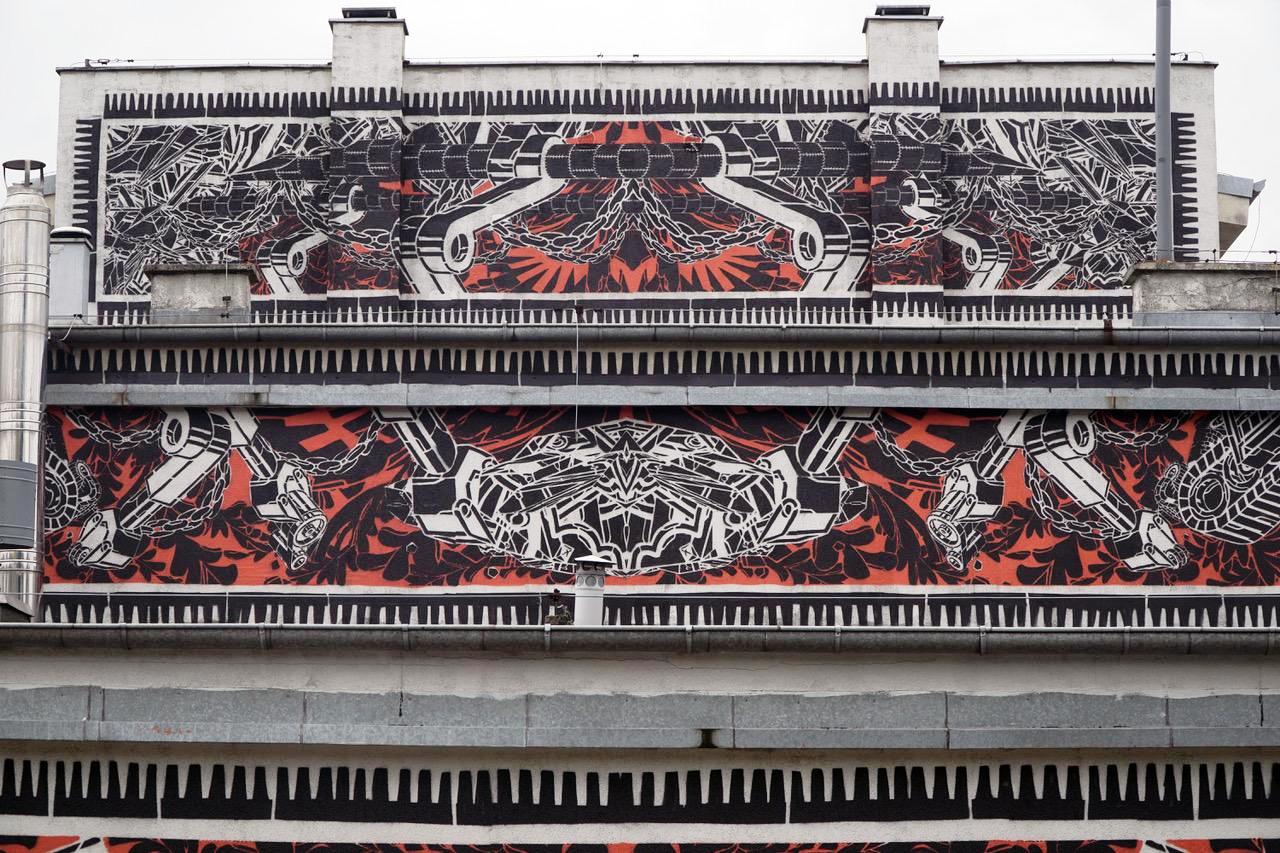 I have a studio in a shipyard. And view from my windows gives me a inspiration. Landscape is changing every day. New ships, boats, workers during work.

OFF-ROAD driving is my new passion. I am a Jeep Rubicon owner. When I have free time I relax on the hard terrain together with other drivers or alone but only on soft roads.

Now I start thinking about two things. A movie and a game. Of course on both my main focus are my artworks as the main part. Another new potential are big moving toys, but this is already half done. Main theme for them is politics. 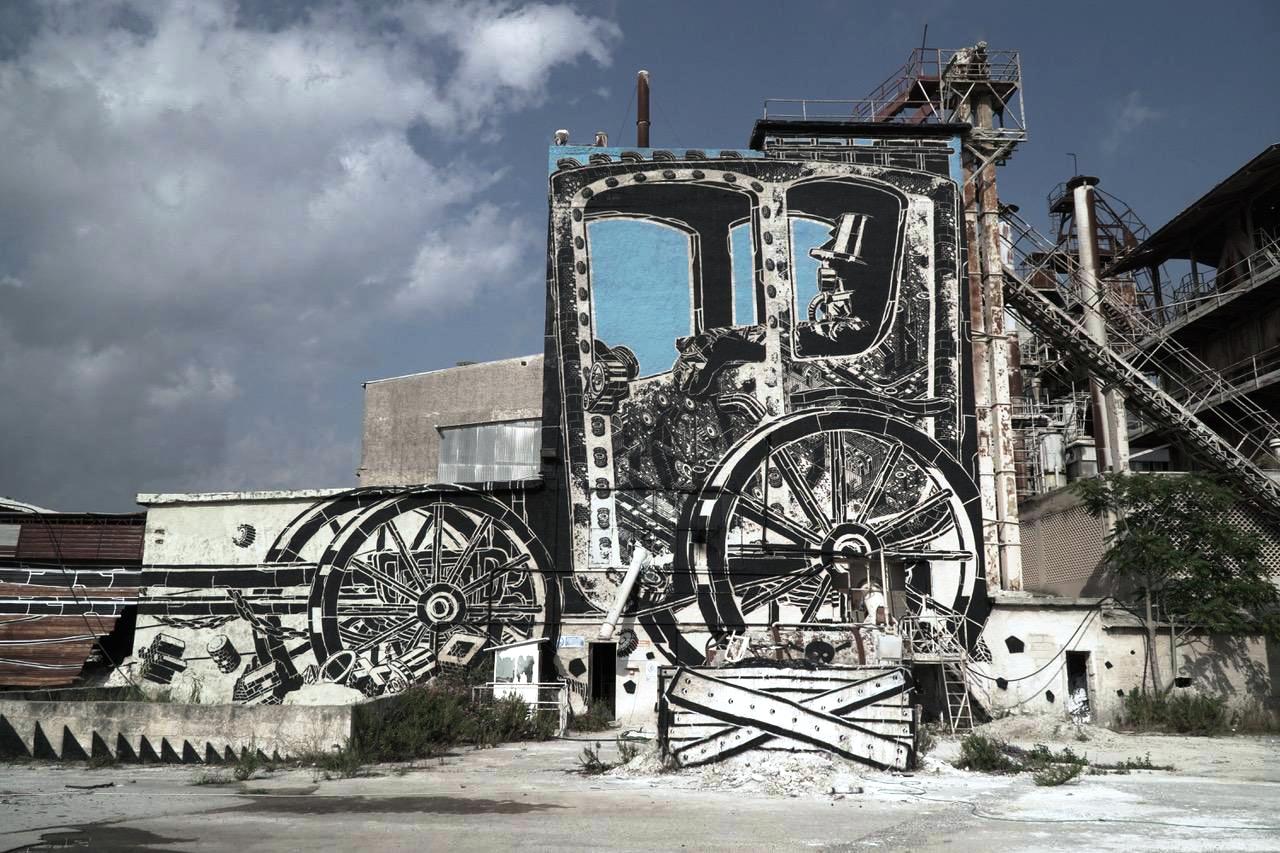 I wouldn’t risk saying that location plays the most important part in street art. Problems, topics and form are just means to build a dialog with target space, or a city from artist’s perspective. It’s not about covering walls with paint but to see it as a dynamic organism, system of changing forces and a platform of expressing individual and social attitudes. It’s a game with given form, transforming signs and a way to ‘open’ space. Apart from working on official projects where the topics are sometimes imposed on me, I often feel like choosing ‘hidden’ locations which are forgotten by people. Firstly, I like the intensity of abandoned buildings, especially factories, which are inspiring not only because of its nature but also as a painting area – state of walls, rust, lighting, etc. Secondly, bridges, tunnels, rooftops – places we constantly pass without actually ‘noticing’ them. Finally, all those separated city districts like slums, favelas etc.

How long time does your art work, on walls, usually survive for?

Hmm … it’s hard to say, because I just sometimes back to my work. Usually I see only in internet if someone take a picture. Documentation is a part of my job. So nothing happened if someone covered my work. Of course not a next day.

-What do you think, people feel or think of, when they see one of your works on the street?

If they are happy Im happy, if they dont like I’m more happy because this is like a virus to said something important. Sometimes I discuss, but not often. I prefer give a sound to my work without me personal. 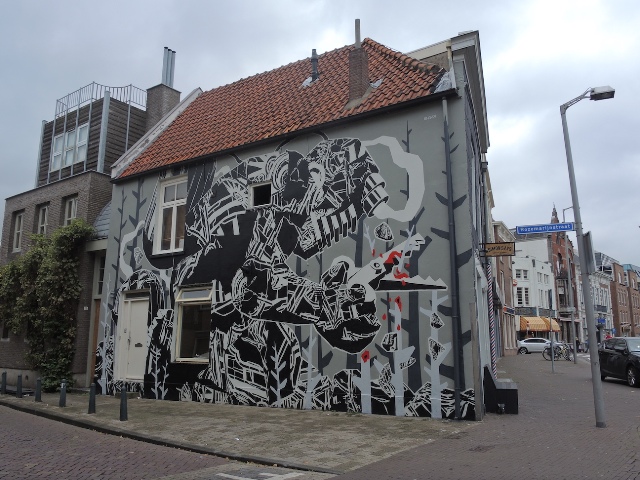 I have several trips like every year. But main focus is Dictador Art Masters project where I am working as a curator.

Do not follow masters, always create your own world.

Thank you! It’s been great to know more about the mind and person behind such talented and inspiring works.
‘’I Support Street Art’’ team. 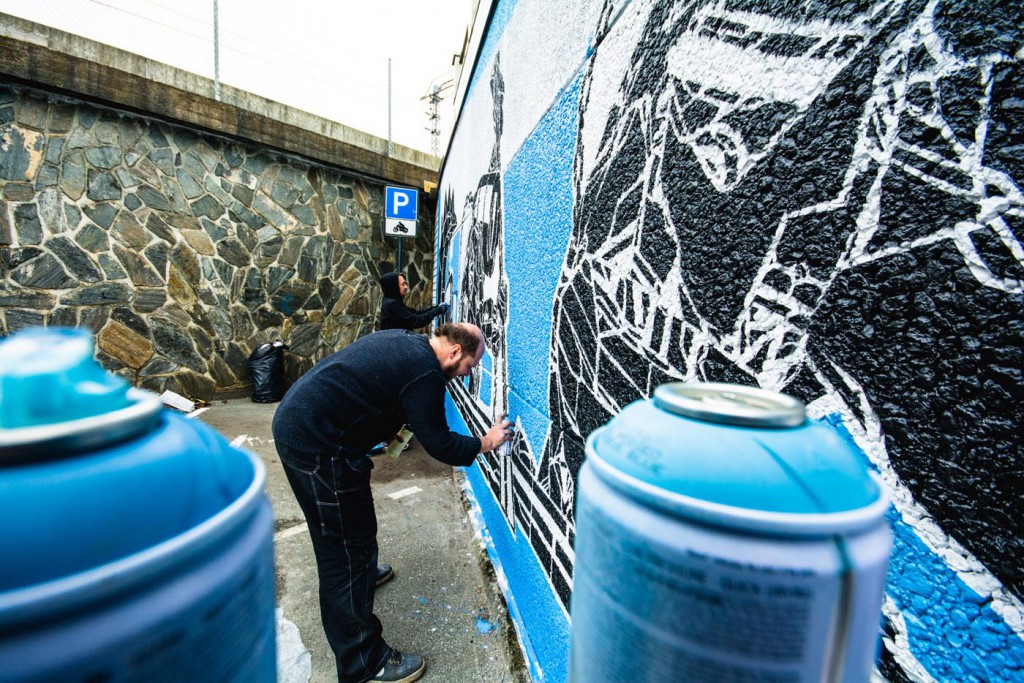