We speak to American artist, Rob Perez aka Deabeathero, living in Vienna, about how his artistic path started and what are his plans for the future.

-What you choose to drink? Coffee, Tea, Beer, Soda or something else?

– Where does your tag name come from?
– When I was younger, before I discovered street art, I made comics. My name comes from a character I created. He was a skateboarding superhero who wasn’t ready to take on the responsibility. I even created a symbol for him that I now use as my tag.

-How do you define yourself? Artist? Street artist? Anything else?
– I consider myself a street artist and a storyteller. All of my characters have their own story to tell and, in many ways reflect me as a person.

– How did it all start for you, and what is it nowadays?
– I have been an artist all my life but it wasn’t until around 2006 that I became fascinated with street art. I founded a live art show in San Antonio, Texas called “Artslam!” and if you google it I’m sure you’d find some old interviews of me. It was through this event I was able to meet so many incredible artists locally and internationally. In 2014 I decided to sell everything I owned and moved to Europe to pursue street art full-time. I am currently living in Vienna, Austria and painting every day.

-What is the first thing you do when you get up in the morning?
– My current routine is to make myself some French pressed coffee and scroll through Reddit to catch up on any US news I may have missed overnight. Then directly scroll through funny gifs of children falling down or cute puppy videos to calm myself back down.

-Street art is mostly a visually stimulating form of art. To add one more sense to it, what music would you pick to accompany your art work?
– Definitely 90’s East Coast, Boom bap hip hop. Although, when I am painting wall I also tend to listen to live punk albums. I like the feeling of painting at a huge event with the loud music and the energy from the crowd.

-In all forms of art, inspiration is crucial. What is it that inspires you?
– I find inspiration everywhere. I know that’s a cliché thing to say but it’s true. It really comes from the strangest places and when you don’t expect it. Aside from that I have to say that comics, more than anything, inspire my work. I used to re-draw comic book characters and change their costumes to create new characters. I often go to old silver age comics for ideas and references.

-What is the hardest part while working on a piece of art?
– When painting on the streets it’s usually hard finding a place to pee.

-Do you have an artist(s) you admire and what for?
– It’s hard to narrow that field down because I admire many artists for different reasons.

-Which cities are the most inspiring for you?
– I would have to say, in no particular order: Vienna, Madrid, Berlin, New York, San Antonio, Austin, San Fransisco, Miami, Tel Aviv, and Barcelona. Next year I’m hoping to add to that list. 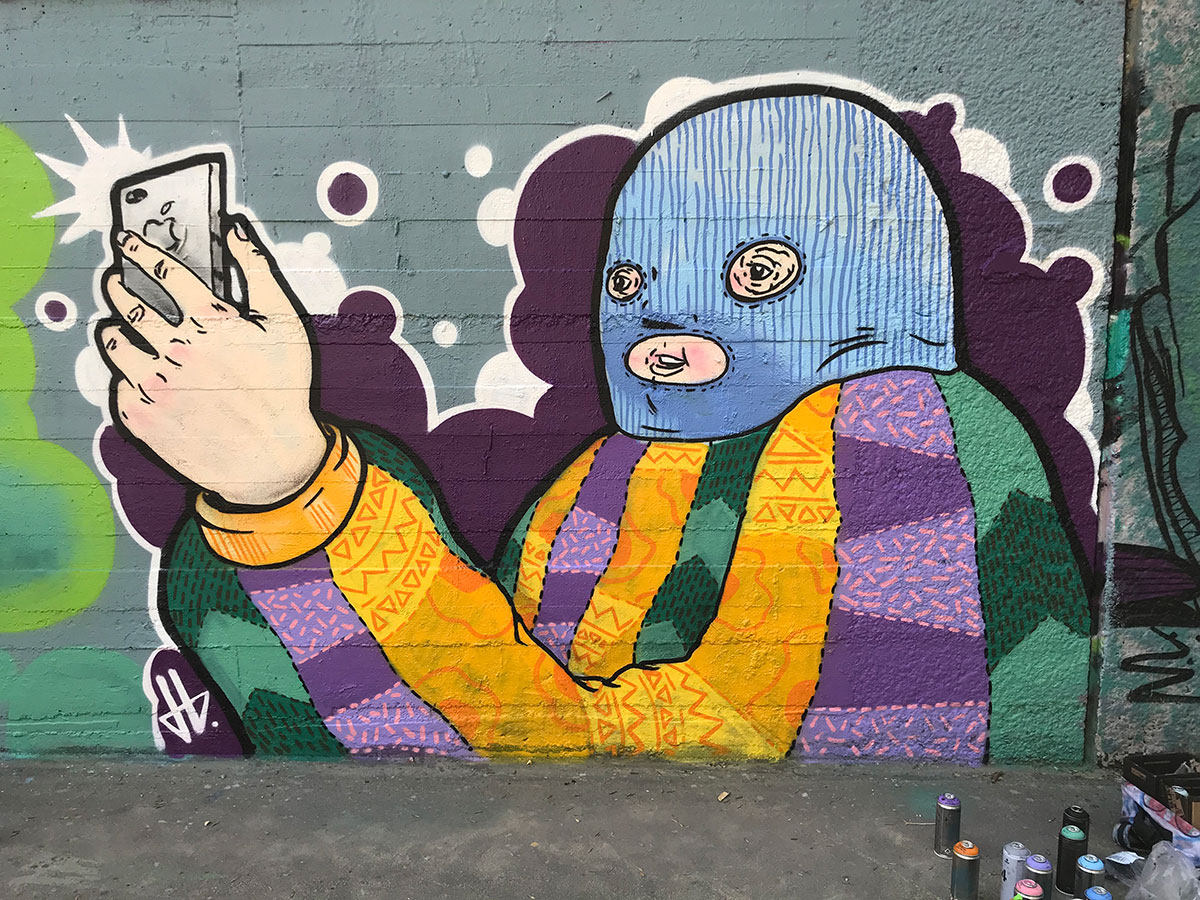 -What other passions do you have apart from art?
– I love digging for treasures at flea markets, estate sales or second-hand shops!

-Do you have a wild project that you dream of achieving some day?
– I hope to bring “Artslam!” back again. Bigger and badder than ever! But before that happens, I have a list of personal goals to accomplish.

-Tell us about your art, does it include symbolisms, messages or repeated patterns?
– At the moment I have two characters that I paint often, “Sweatermen” and “Austrianauts”. The “Sweatermen” are over-weight, always have a ski mask and a colourful sweater on, and are always on their cell phone. I see them as representing ourselves in a way. Hiding behind the internet wall and only showing people what they want them to see. I like to hear how others interpret these characters. The “Austrianauts” are fun because they allow me to play with my comic book background with dynamic poses and fun panels. These characters are explorers but protect themselves in a robotic suit. In a way, they represent me when I first moved to Europe and was unaware of my culture shock. The suit does everything for them so they can survive, but mentally and physically, they are not yet capable of experiencing their new surroundings.

– How long time does a piece of art work of yours usually survive for?
– Usually 2-6 months but sometimes longer.

-What do people first think of, or feel, when they see one of your works on the street?
– I don’t ask people what they think of my art. If I’m painting a “Sweaterman” I tend to see people smiling, or sometimes laughing. Maybe people find them cute in a weird way, or maybe my zipper was down. When I paint the “Austrianauts” I usually get a thumbs up or a nod.

-Do you have a secret you would like to share with us? 🙂
– I have no idea what I’m doing, but I’m having a fun time doing it.

-What are your creative plans for the future?
– I am currently opening an art space/gallery with The Creative Fillip, a non-profit organization here in Vienna, where I plan to create a new series based on my “Austrianaut” characters and to exhibit later next year. As well as offering different creative workshops for the organization. I am also planning to paint at a few street art festivals next year. 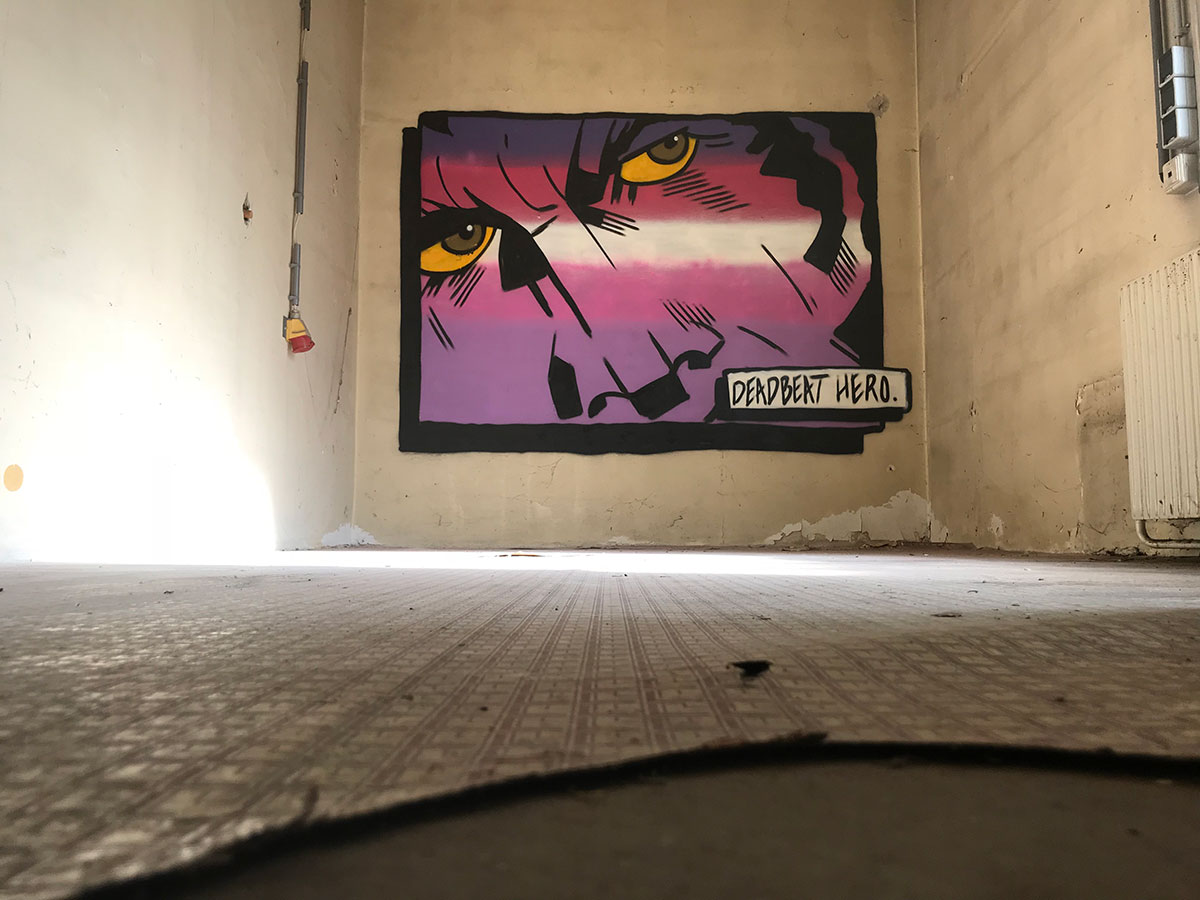 -Is there a specific thought or message you would like to pass to our audience out there?
– It doesn’t matter where you are in this world, the center of the universe is where you make it.

Thank you Deadbeathero! It’s been great to get to know more about the mind and person behind such talented and inspiring works.
‘’I Support Street Art’’ team. 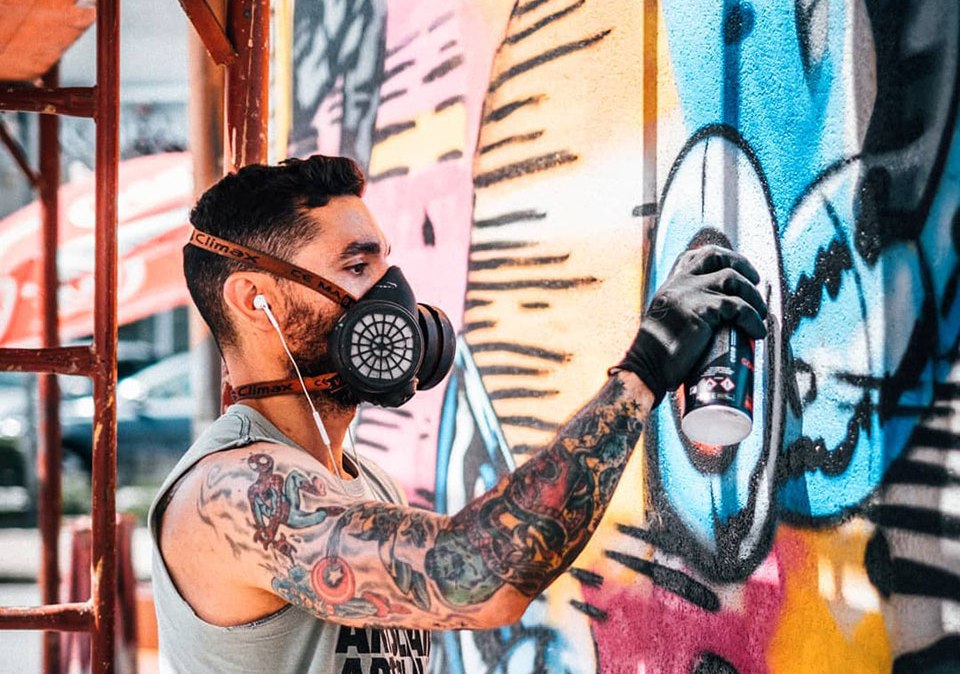