Who’s Your Daddy? – Phnom Penh with JonOne, MadC and Mist.

Kolly Gallery is proud to present the most recent paintings by JonOne, MadC and Mist .This time Who’s Your Daddy? – Phnom Penh – is presenting a whole bunch of brand new produced artworks for the exhibition.

About the artists:
JonOne (John Andrew Perello) is born in 1963 in New York (USA) and lives and works in Paris (France). At the age of 17 he started to spray with his childhood friend White Man. Jonone began to spray first on the New York subway trains. He quickly emerged his abstract and cryptic style. With his exceptional style including movement and color made him stand out from usual figurative graffiti sprayers. In 1990 JonOne had his first solo exhibition
entitled “Graffistism” in the Galerie Gleditsch 45 in Berlin (Germany). Since then his works were exposed in solo and group exhibitions in Tokyo, Monaco, Paris, Geneva,
New York, Hong Kong, Brussels and Moscow.

Claudia Walde alias MadC is one of the most successful among female street artists indoors as well as outdoors. She was born in Germany but raised in Ethiopia. She studied at both Burg Giebichenstein, University of Art and Design in Halle and Central Saint Martins College in London. She is not only a talented and emerging artist but also a professional author for Graffiti and Street Art, which show her cultural and anthropological insight. She published Sticker City – Paper Graffiti Art (2007) and Street Fonts – Graffiti Alphabets
From Around The World (2011). One of her most remarkable pieces was the 700- Wall (2010) with a size of 700 m2. This mural is most likely the largest graffiti created by a single person and was finished in four months time. Today MadC can no longer save herselffrom inquiries for murals. Her huge facades are spread all over the world: Mexico, America, England, France, Sweden, Germany and Tahiti.
There will be many more to come, keep your eyes open!

MIST discovers his passion for graffiti in 1988 by realizing his first piece. Being fascinated by the wild style he ads his own twist with slightly acid and bright colors. Standing outfrom his competitors 1991 he gets the chance to exhibit with Futura, Keith Haring andJean-Michel Basquiat at the Musée National des Monuments Français. Also recognized as pioneer of the so called „designer toys“ he designs vinyl toys such as Orus, Malus, Lucius and many more, which get sold allover the world. Rated between the world top five artists’ alongside with Kaws and Futura, MIST nowadays dedicates himself completely on his sculptures and paintings in his studio in Montpellier. The present paintings are at the same time abstractions and fusions of letters, graphic codes and characters derived from his toy productions. The sharp, edgy and clear lines nevertheless remind of his wildstyle pieces in the streets of Paris. 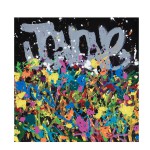 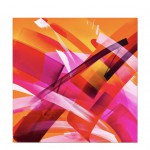 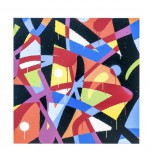