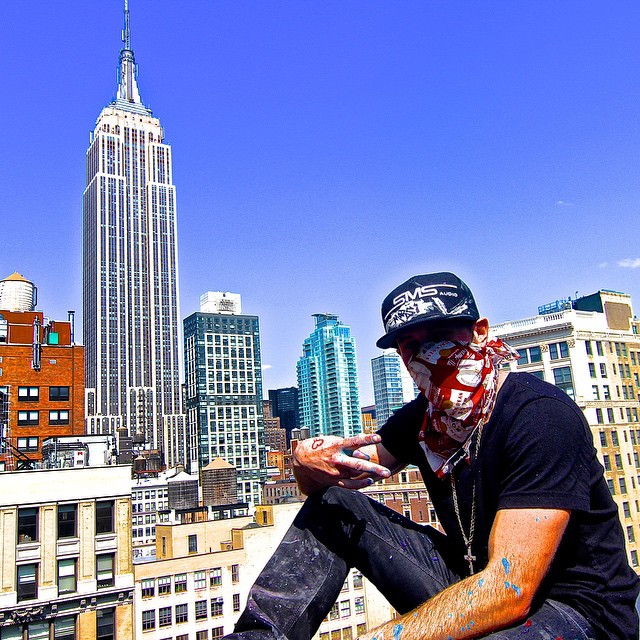 Skott Marsi has been commissioned by the Kaufman Organization (KO), to put his uniquely energized imprint onto three of the four properties that comprise KO’s Madison Square Portfolio in Midtown South, transforming the office buildings for creative, tech and new media firms.

Skott was chosen for his inimitable style and in this project he transforms the mundane elevator ride into a vertical street art gallery.  The ride whisks you up and through an exhibition by way of a glass wall facing the elevator shaft that showcases different artwork on each landing. Marsi and Kaufman chose to highlight some iconic images of New York and its top influencers: Warhol, De Niro and the Flatiron Building.  In three separate buildings, each with 12 floors, you’ll get to see a total of 70 distinct artworks – a monumental achievement produced in six weeks.  This is one elevator ride where you might intentionally press the button for each floor to get a closer look.  The Madison Square neighborhood is a virtual beehive of activity and is one of the most desirable and accessible neighborhoods to live and work in. Also known as the Silicon Alley of New York, Marsi’s artwork appeals to tech industry leaders and the entrepreneurship ecosystem surrounding it.

As an early teen, Skott’s first graffiti ‘tag’ was his own rendering of the iconic Gumby, an American clay humanoid character, created by Art Clokey.  Over the years, his work has evolved.  He draws inspiration from Picasso, Jackson Pollock, and graffiti artist Banksy to produce what Skott calls ‘controlled chaos.’  A transformation began in 2011 when he became one of the top trending artists working out of the Wynwood Art & Design District of Miami – a hotbed for the latest talent. Skott was asked to paint live at Art Basel Miami which became a driving force for exposure.