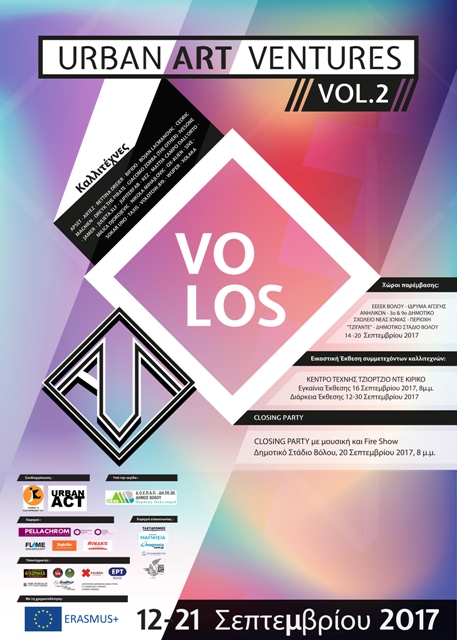 Jugend- & Kulturprojekt e.V. (www.jkpev.de) and UrbanAct (www.urbanact.gr) invite you to UrbanArtVenturesVol.2 during 12-21 September 2017, which is dedicated to urban art and is being implemented within the framework of the European Program Erasmus +.

30 artists from graffiti and street art and youth workers from Germany, Denmark, Greece, Spain, Italy, the Netherlands and Serbia are involved in the study and application of graffiti / street art, frescoes and urban art.

2. Exhibition at the Art Center Giorgio de Chirico (Metamorphosis 3, Volos), which presents:
– Visual exhibition with works of posters of participating artists from Greece and abroad
– A unique collection of books and albums on the history and movements of graffiti and frescoes
– A report of the actions of the two implementing bodies, Jugend- & Kulturprojekte.V. and UrbanAct

The duration of the exhibition is 12-30 September 2017 with free entry and the opening will take place on 16 September 2017, 8 pm with surprises and fire performances.

The action will end on Wednesday 20 September 2017 at 8 pm at the Municipal Stadium of Volos, where the works of the participating artists will be presented, followed by a closing party and fire performance by Art of Flame.