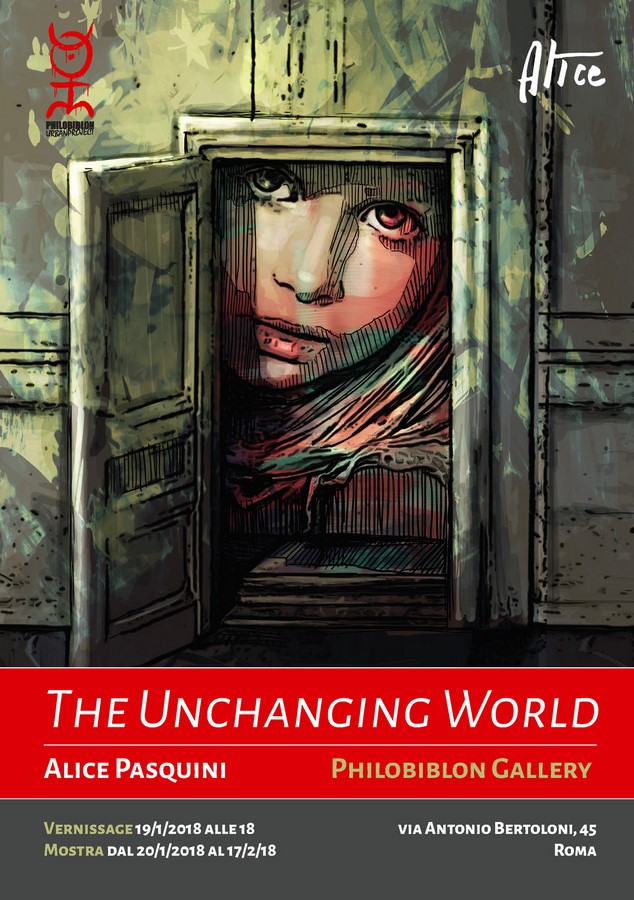 After three years, the artist returns to exhibit in her hometown, selecting PHILOBIBLON GALLERY’s Rome exhibition space to show her new body of work.

THE UNCHANGING WORLD is an introspective journey along the evolutionary path from childhood to adulthood, examining the middle ground as a transitional space. The work explores the thin line between objective and subjective realities—and the overlap between these dual realities where illusion, creativity, and gameplay meet.

Inspired by concepts introduced by WINNICOTT, Alice retraces the movement from one state of evolution to another, giving life to the transitional objects children use to help themselves move toward a shared reality without trauma.

With this in mind, an abandoned doll house, consumed by time, is a place/non-place where everyone can delve into their childhood memories and return, for a brief time, to the distant past. Spying through the keyhole, we reflect back on ourselves, conscious of what our psyche has created.

THE UNCHANGING WORLD is an exhibition devoted to the magic of making ourselves. And as such, the artistic objects express—just as the transitional ones—a world not faithful either to the internal or external world, but the grey area of illusion. This intermediary area between the subjective and objective dimensions represents in and of itself “illusion…that in adulthood is an intrinsic part of art and religion” and that the territory where creativity lives is first manifested in gameplay, and later in cultural life.

The exhibition demonstrations that time does not change ourselves and that the architecture we built as children are the same ones we inhabit as adults….

Alice is one of the few female exponents of street art working actively in the international arena. Her work can be admired on city walls, as well as in museums and galleries around the world. Sydney, New York, Singapore, Barcelona , Moscow, and Paris to name a few.