“TOYBOX: America in the Visuals” By Ron English check the website

Corey Helford Gallery presents  an outrageous sensory blast for the eyes and ears, all built around the newest body of paintings from celebrated pop art visionary Ron English.

English returns to CHG with “TOYBOX,” a new body of work deploying the artist’s long established visual vocabulary into multi-layered narratives of ambition and imagination. “TOYBOX” deconstructs the search for new meaning in a culture that is based as much on the imagination of its participants as on the physical realities these human concepts are played against. The toy based childhood imagination aesthetic of the work allows for a playful new look at a society in the throes of reinventing itself. 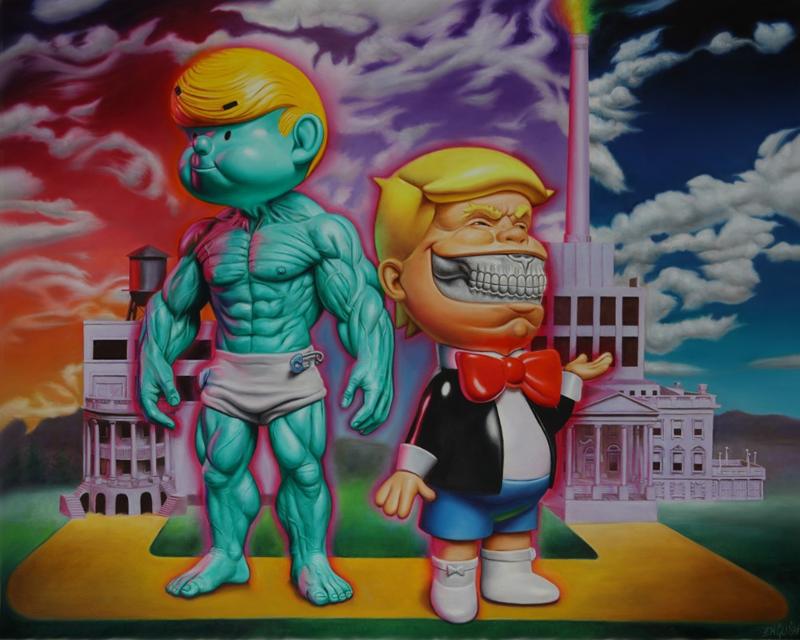 The exhibition, featuring 36 new oil paintings, as well as sculptures and installations, examines the creation of the self, and thus the greater society, as an act of imagination, a skill developed in childhood largely through the activity of play and the use of toys. Toys introduce a codified visual narrative of the individual and the archetypes that construct the collective narrative that is the underpinning of society.
One of the most prolific and recognizable artists alive, Ron English is considered the Godfather of Street Art and Seminal Pioneer of Pop Surrealism. For this exhibition, English has also co-produced a musical soundtrack to be performed by new character DJ Popaganda.

The exhibition will also include a new outdoor mural and a pop-up store selling Ron‘s limited-edition toys.

The opening reception for “TOYBOX” will be hosted Saturday, December 2 from 7-11pm