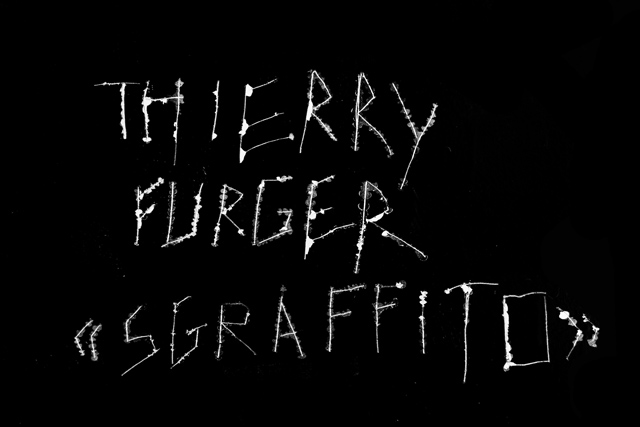 Thierry Furger was born in 1975 in Switzerland, where he lives and works today. During the 1980s he discovered the world of Graffiti, since then he never stopped observing and exploring its phenomena. In 2007 he began to show his own creations inspired by the transience of Graffiti. He continues exhibiting his own artworks until today in Zurich, Bursins, Weil am Rhein, Basel and also Paris.

In his artistic career he is not only creating artworks but also observing mankind, their habits of expression and their dealing with Graffiti. As an expert of aesthetics Thierry Furger has followed and documented the subculture of writers especially in Europe for over twenty years.

Since 2007 he intensively studies the transience as well as the aesthetics of removed illegal tags and Graffiti pieces. In the long lasting examination of the ephemeral phenomena the famous series Buffed Paintings evolved. Taking a totally different perspective as other artists he took in consideration the challenges for graffiti writers as well as for cleaning institutions. In 2017 he breaks with the ephemeral tradition of Buffed Paintings and surprises the public with his new series Sgraffito presented at the Kolly Gallery for the very first time. After the subject of transience a more permanent apparition in the subculture has caught Furger’s eye – carving and scratching. How can mankind eternalize itself? Which traces resist ephemeral processes? Scratching surfaces is an ancient decorating technique, which had its revival in the Graffiti culture of the 1980s, called “Scratchiti“. In this regard Sgraffito indicates not only an aesthetic but also an educative concept, which lies beneath Furger’s creative practice.

Kolly Gallery invites the public to a guided gallery tour as well as an artist talk . It will take place on Saturday, March 18th, from 3.30 to 4.30 pm.