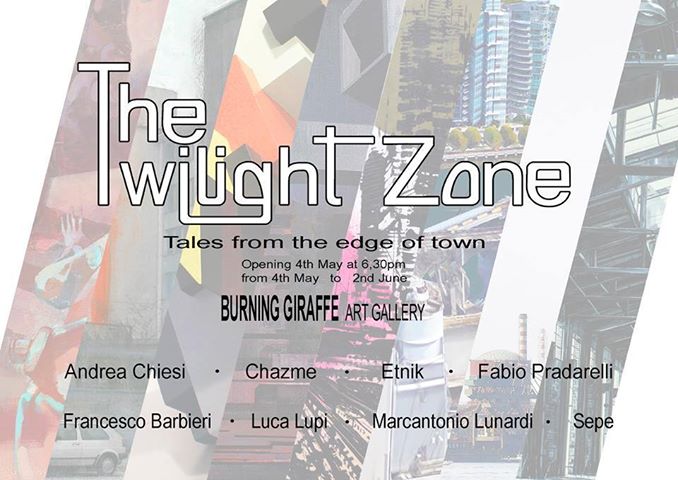 Through the pictorial, photographic and sculptural works of these eight artistic personalities we propose a reading of the incredible and original declinations that the realist movement has taken today, in the aesthetics of representation and emotional restitution of the urban landscape and of the urban daily life that takes place there, revitalizing and continuing what has been begun over two centuries ago and underlining how this movement has not only not died, but has regained autonomy as an expressive form in the contemporary artistic scene. 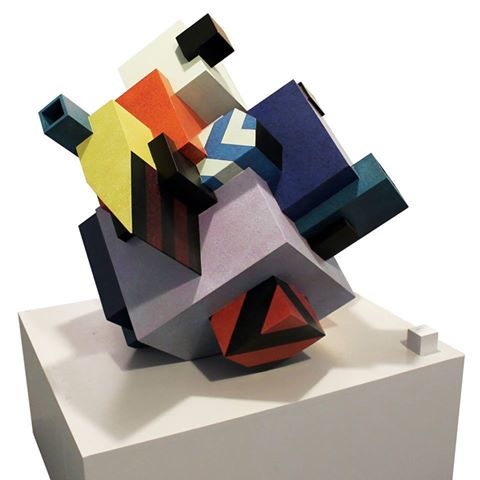 “In the last twenty years there is a new group of artists which return to represent urban daily life answering to that duty of chronicle of the contemporary with a quality and variety of original, unpublished, personal and expressive solutions. For many contemporary artists, the city returns to be a perfect subject for their research through which reflecting (even with polemic voices) on the crisis that has invested in the last twenty years and contaminated the form of the city. New artists who paint the decadent charm of the contemporary outskirts and documenting urban communities that live there describing typical everyday situations.

From descriptive realism, which touches Piranesian levels, of the metropolitan landscapes of the Emilian artist Andrea Chiesi, pervaded by a rarefied, alienating but attractive atmosphere, where time seems to be suspended and human activity disappeared. The lucid research of the Tuscan photographer Luca Lupi, who, with a pure and clear look, places himself before certain landscapes, returning subtle languages. Sharp edges, in some respects irregular in their heights, that seem the natural continuation or interruption of the horizon line, functioning visually as an electroencephalogram of the contemporary city. Move on to the strict rigor of the volumes and compositional structures of the urban and industrial constructions, protagonists of the pictorial works of the Polish muralist Chazme and the Italian architect Fabio Pradarelli, who make architectural portraits in which the descriptive detail is reduced to the essentials to demonstrate its their size is not always positive. Up to more lyrical levels, far from a descriptive will, with urban portraits and views of railway stations and suburban places around the world hinted by the palette knife of the Italian painter Francesco Barbieri, who entrusts the return of the instinctive gesture emotional atmosphere. Then we meet the original research translated into sculpture by the Italian muralist, Etnik, with his architectural metaphors, which return a personal critique to the asphyxiating savage construction operated today in our cities. If until now the human presence has remained on the sidelines, the exhibition itinerary ends with two researches that polarize the attention on two of its aspects: daily life and the sign left in the urban landscape. The Polish muralist, Sepe, in fact, is the only one in this group to document with critical and ironic point of view typical scenes of today’s daily life of a society dedicated to consumerism, to the sanctification of appearances and to the pursuit of false social values dictated by the mass media. Finally, our attention is captured by the realism transfigured in the photographic works of the Tuscan video artist Marcantonio Lunardi who, through the Google Earth software, explores the urban border areas in a virtual environment capturing unprecedented views of the landscape that contain evidence of human presence, emphasized aesthetically exploiting the errors of the program in the 3D rendering, making them stand out as precious stones embedded in these monstrously deformed environments.

In The Twilight Zones of the metropolitan centres is produced an aesthetical oxymoron: areas are attractive and repelling at the same time, they are narrated by a thick group of artists that contribute to the rebirth of the contemporary urban realism in the new genre-painting. A group show that has thus the ability to bring out the different forms of expression adopted by a range of artists representing the new trends of realism in the Italian and European, in a continuous relationship between the return and restitution of the perceptual moment seen in the image reproduced.” (Excerpt from Alessandra Ioalè’s critique “The Twilight Zone. Tales from the edge of town”)

Francesco Barbieri (born in 1976 in Pisa, Italy). Is an internationally recognized artist working in contemporary post-graffitism. With his work on canvas he has explored various topics borrowed from graffiti folklore. His production focuses on the creation of urban landscapes where the train and the railroad are often central elements. In his works he explores “the margins” of urban life, representing those no-man lands which one can find at the geographical and social borders of the city. With his unique visual language, Barbieri aims at conveying those same feelings that he experienced in the streets and that he has been exploring for years. Travelling has become one of the essential elements of his art: he visited several times, among others, Berlin and Stockholm in Europe, New York and S. Francisco in America, Beijing and Nanjing in China, with the desire to discover the hidden lives of modern metropolises. www.francescobarbieri.eu

Daniel Kalinski aka CHAZME (born in 1980 in Laufen, Switzerland). Is a Polish painter, illustrator and street artist. In 2008, He graduated in Architecture and Urbanism from the University of Technology in Warsaw. Chazme often constructs urbanised structures out of defined, geometrical areas. These dystopian compositions are comments and critiques on urban planning and architecture, which the passers-by are invited to decipher, reflect and maybe even oppose. On a visual level, they are most always compositionally perfectly balanced and reflect the pattern of our modern skyscraper architecture. The artist’s studio work ranges from canvas to collage. Even though his studio work is more figurative, it still emits the strong assemblage aesthetic which is unique to his work. Chazme’s street art pieces can be seen on the walls of many metropolises such as Prague, Berlin, Glasgow, among many others. Lives and works in Warsaw. http://chazme.org/

Andrea Chiesi (born in 1966 in Modena, Italy). He lives and works in San Pancrazio (Modena). Self-taught, Andrea Chiesi trained in the counter-culture of early 80’s punk and independent music. He began drawing for independent fanzines and making exhibitions in social centres. The works from this period were created using black and violet inks on paper. The characters, figures and spaces represented were connected to the particular cultural environment he used to attend. Later he has started a research about contemporary landscapes, time and memory using a strict and careful oil painting that sometimes enhances industrial subjects or urban spaces, but others creates strong black and white contrasts thanks to a fast transition from darkness to a half-light situation. The use of ink in drawings and the oil painting technique are carried on simultaneously and it helps to pay attention to the differences between the two worlds: a shifting and fluent universe the first, a metaphysical and timeless one the latter. www.andreachiesi.it

Etnik (born in 1972 in Stocholm, Sweden). Active since the early ’90 in the writing scene, searching new ways to push the limit of the classical graffiti to a high level painting big murals with concept and organizing events to connect the best european artists. From the 2001 his way to paint start to evolve to geometrical and architectural forms, still working on the lettering with a mixture of urban landscapes. This way to rappresent the CITY and criticize it and painting the urban volumes as an abstract composition, is the way to work on different media from painting, to sculpture and installation. Now work in his studio in Turin, traveling a lot for mural paintings and gallery shows. www.etnikproduction.com

Marcantonio Lunardi (born in 1968 in Lucca, Italy). Graduated in documentarist direction, since 2001 Lunardi has dealt with the social and political documentation working on installations, documentaries and video-art works. After the master at the Festival dei Popoli in Florence with Michael Glawogger, Sergei Dvortsevoy, Thomas Heise and Andrés Di Tella he engaged in a path in the field of the motion pictures experimenting with a language bordering with the cinema of reality and the video art. His works have been put on display in famous international institutes such as: the National Art Center in Tokyo, the Galeri Nasional Indonesia in Jakarta, the Fondazione Centro Studi Ragghianti in Lucca, the Video Tage Center in Hong Kong, the Museum on the Seam in Jerusalem, the Videoart Yearbook of the Dipartimento di arti visive (Department of Visual Art) at the University of Bologna. Lunardi was also a guest at many festivals of experimental cinema and of video art such as: the Festival Internacional de Cine y Video Experimental in Bilbao, the N Minutes Video Art Festival in Shanghai, the Cairo Video Festival in Cairo, the Festival Invideo in Milan, the Video Art & Experimental Film Festival – Tribeca Cinemas in New York. He lives and work in Bagni di Lucca (Lucca, Italy). www.marcantonio.eu

Luca Lupi (born in 1970 in Pontedera, Pisa, Italy). With the photographic project “Landscape”, whose places and subjects are all different: walls, trees, cities, woods, beaches, industrial areas, but connected by the same height of the horizon and from the same frontal point of view, the artist reflects on the complex and continuous transformations of places and on the relationship between the built and the natural that gives shape to our contemporary world. With this project, in 2016 he won the first prize in the Italy in a frame contest – the Italian Community at the Milan Triennale. Lives and works in Fucecchio, Florence (Italy) www.lucalupi.it

Fabio Pradarelli (born in 1955 in Pesaro, Italy). Studied architecture at the University of Florence, at the same time attending the Faculty of Contemporary History of the University of Oregon, Eugene Oregon U.S. Graduated with a thesis in Composition in 1983 in Florence, he worked for about two years in a professional studio in Pesaro, before moving on to the profession with a structure of his own. He currently practices as an architect with a studio in Pesaro. At the same time as professional activity he has also carried out an intense activity in the visual arts sector, with numerous solo and group exhibitions in Italy and abroad. www.fabiopradarelli.it

Michał ‘SEPE’ Wręga (born in 1982 in Warsaw, Poland). Since 1996 related to graffiti and than street art scene in Poland. Graduated graphic design on Academy of Fine Arts in Łódź in 2009. Lives and works in Warsaw as a freelance graphic designer, painter and illustrator. Raised on traditional graffiti movement, rooted in book illustration and then by the studies interested in graphic and poster design, Sepe is searching for his individual art language mixing those three paths on paper, canvas and walls as well. www.sepeusz.com