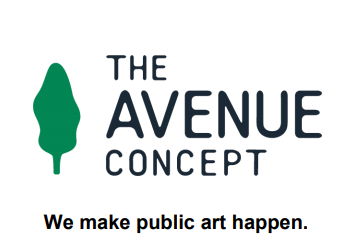 The Avenue Concept Announces Summer 2020 Mural Program. Local and national names, fifth installment of the Providence National Bank facade residency and the organization’s first mural in Cumberland all on tap for summer Providence, RI – The Avenue Concept, Rhode Island’s leading public art organization, today announced the line-up and tentative schedule for its 2020 Mural Program.  The program includes both nationally-recognized and local artists, the fifth installment of the organization’s rotating mural residency at the historic Providence National Bank facade and the third installment of its mural partnership with Wexford Science + Technology in the Innovation District. The schedule begins today with The Avenue Concept’s first mural in Cumberland.

Local artist Joanna Vespia kicks things off at the New England Humane Society in Cumberland June 24-28. Vespia, known in part for her pet portrait work, will paint a collage of dogs and cats, including depictions of some that were housed at the shelter. The project is financed by the shelter and the paint is sponsored by Adler’s Design Center & Hardware in Providence.

The program continues with graffiti artists Osteo and Geser, both of whom have previously worked at The Avenue Paint Bar, the organization’s paint shop and legal graffiti program. Location and dates are to be determined.

Florida-based street artist Hiero, known for his national “Spray Their Name” project, in which he paints portraits of victims of police violence in cities around the country, comes to Providence in July to paint a new mural at 1 Ship Street. The mural is part of The Avenue Concept’s ongoing public art partnership with Wexford Science + Technology, developer of the Point225 innovation center; it will replace an existing mural by localgraffiti artist ABOVE.

Also in July, Massachusetts-based artist Jimboe, who collaborated with The Avenue Concept on a previous Ship Street mural, will paint the front facade of the organization’s South Providence headquarters.

Later in the summer, The Avenue Concept will mark the fifth installment of its annual rotating mural residency at the historic facade of the Providence National Bank building on Weybosset Street in downtown Providence.

This year, for the first time, the residency will feature two female artists, painting both the front and back of the facade. Boston-based artist Sagie Vangelina will paint the rear of the structure, while Rhode Island science illustrator Amy Bartlett Wright will rework the front. Bartlett Wright’s project will be the first-ever crossover between The Avenue Concept’s mural and sculpture programs, featuring painted cutouts affixed to the structure’s panels in addition to the new painting. The annual residency, which launched in 2016, is done in partnership with Paolino Properties; work is expected to begin in late August/early September.

“This year’s line-up of mural projects represents an expansion of what we’ve been doing with this program since 2015: nurturing local talent, bringing national and international artists to Rhode Island, and extending the footprint of our work throughout Providence and beyond,” says Avenue Concept Mural Program Manager Nick Platzer. “The works will reflect themes and ideas that are relevant to our community and the artists will showcase a range of styles from street art to fine art and everything in between. It’s going to be an exciting summer.”

About The Avenue Concept
The Avenue Concept makes public art happen. We do this by investing in permanent infrastructure, funding public art projects, documenting and promoting the work of artists, using art as a tool for education, and advocating for policies, processes and partnerships that develop sustainable avenues for public art. Our goal is to build an environment in which art thrives and to create public art encounters that encourage people to engage and interact with art instead of passively observing it. Founded in Providence, RI in 2012, The Avenue Concept is the state’s leading public art program. Since then it has installed or exhibited more than 150 works of public art, and invested $1.1 million in both artwork and infrastructure.