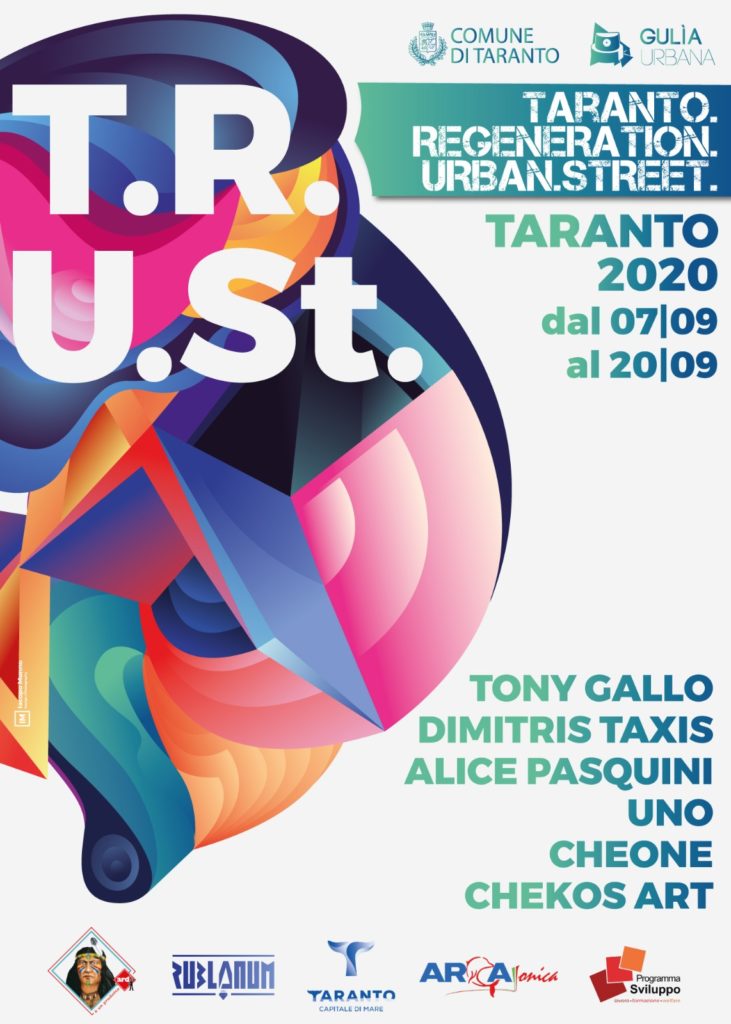 The first edition of T.R.U. St., Taranto Regeneration Urban Street, from 7 to 20 September 2020 in Taranto, curated by Gulìa Urbana.

Taranto – Everything is ready to kick off the first edition of T.R.U. St., Taranto Regeneration Urban Street, organized by the Rublanum Association, thanks to the will and collaboration of the Municipality of Taranto.

T.R.U.St., acronym for Taranto Regeneration Urban and Street, introduces the concept of Urban Art to Taranto as an “open-air museum”.

It is structured as a permanent festival of urban art, with the aim of promoting contemporary arts and redeveloping, enhancing and developing unprecedented territorial potential, especially those concerning the urban through new forms of art and communication.

The project was born from a strong will of the Municipality of Taranto and the Rublanum association, already author of several editions of the Gulìa Urbana festival, in the persons of Andrea Falbo, Matteo Falbo and Giacomo Marinaro. Local operators such as Mario Pagnottella were also used, with the aim of organizing a stable artistic-productive container in Taranto, capable of regenerating and strengthening the attractive attitudes of the city through site-specific interventions.

“Our mission, through the street art project, has always been to share emotions that only art can convey among the public, organizers and artists, within a place that belongs to everyone: the street.
The road to a new city is waiting to be discovered. Culture, people, words and sounds are the setting for an initiative that starts from an artistic movement that not only leaves visible traces of colors and shapes. It is also an experiential event that anyone passing through gives and receives something “.

Tony Gallo, Uno, Alice Pasquini, Cheone, Dimitris Taxis, Checko’s Art are the street artists present at the event, who during the entire duration of the project will work on some surfaces of the Paolo VI District, on the external facade of the Ricciardi Gym and on an external surface of the new Acclavio Municipal Library, which will be inaugurated during the project.

Artistic and creative workshops will be organized thanks to the collaboration of Programma Sviluppo, the institute designed to train companies and talents.

Gulìa Urbana is the street art festival created by the Rublanum association, which aims to recover abandoned or under-valued urban areas through art, referring above all to the world of writing, urban art and street art.
Rublanum is a social promotion association founded in Rogliano, a small town in the province of Cosenza, which for 10 years has been carrying on the dream and goal of enhancing the urban area through new forms of communication.