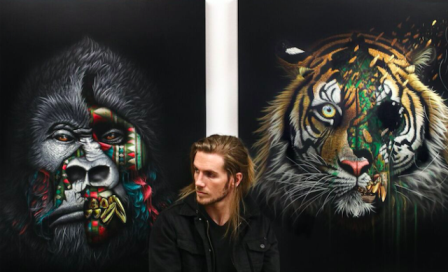 Johannesburg-based (British-born) artist Sonny returns to New York City in May, exhibiting his first body of work on large-scale canvas and a series of hand painted sculptures in To The Bone. The artist is known for his passion for the protection and furthered conservation efforts of endangered wildlife, depicting those animals with unsure futures, close up, and stripped to the bone. The exhibition marks the culmination of a worldwide tour of mural painting in various cities around the world, including The Netherlands, Canada, Russia, USA, South Africa, UK, and others. 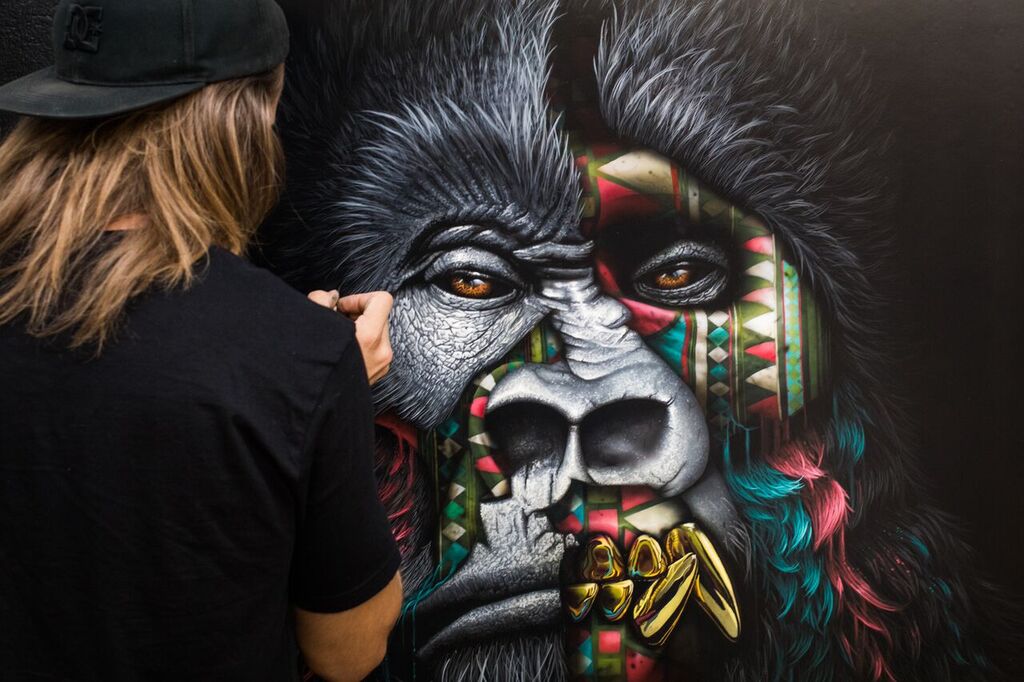 Best known for his enormous and exquisitely detailed spray-painted murals, Sonny has recently honed his painting skills to present a series of large-scale canvas pieces. In To the Bone, Sonny depicts a story of regression and destruction – an epic of nature and our heritage deteriorating under the twin pressures of civilization and expansionism. Individual pieces portray an intimate portrait of an endangered species, a gorilla, a rhino, an elephant, a lion, a tiger, a panda, and so on.Half of each animals’ face has been stripped of flesh down to the bone, where the artist has meticulously decorated the animals skull with the patterns of tribes local to that species’ origin.

To the Bone highlights the precarious balancing act that exists between mankind and the animal kingdom, a haunting reminder of how much we have lost and that we have yet to lose. Detached from the natural world, we tend to look upon wild animals with a sense of strangeness – always with a degree of separation between us and them. This series forces us to question this thinking; by gazing into the animals’ eyes we’re made perhaps too keenly aware of our sameness.

Depicted with golden horns and teeth, the imagery argues that the only value that these ‘keepsakes’ hold is as a part of a living animal. It is these animals that hold true value for us and our world, not the man-made markets for ivory and fur. Reminiscent of Kenya’s symbolic gesture in 2016, when a pyre of 6,000 illegally trafficked elephant tusks were set alight in one of the largest burnings of poached wildlife goods in African history, the message was a simple one; the only value of ivory is tusks on a live elephant.

The imagery is further amplified with the inclusion of the hand-painted skull replicas – a tangible symbol for what the future may hold. Mirroring the paintings, these skulls are embellished with native patterns, slowly fading away; a dual extinction of species and heritage. These skulls, with their golden teeth ablaze, invoke an appreciation of the might and power of these creatures, together with an acknowledgment of the fact that we, as mere humans, could truly be the most ferocious and frightening species of all.