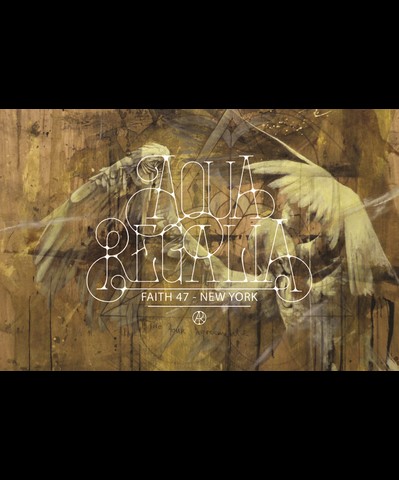 Jonathan LeVine Gallery  presents a series of new works by South African artist Faith47 in what will be her debut solo exhibition at the gallery.
Faith47’s artistic approach is explorative– from creating work in her studio using rescued objects, to painting murals on city walls around the world. For her first solo show in New York City she explores the dichotomy between the sacred and the mundane by enveloping viewers in a space with figurative paintings, as well as intricacies from everyday life in shrine-like artworks. Through this pairing Faith47 celebrates the commonplace as holy in an attempt to disarm strategies of global realpolitik and advance the expression of personal truth. In this way her work is both an internal and spiritual release that speaks to the complexities of the human condition, its deviant histories and existential search.
This show is a continuation of the artist’s successful 2014 London exhibition. ‘Aqua regalia’ or ‘royal water’ is the alchemical name for a highly corrosive mixture of nitric and hydrochloric acid that has the ability to dissolve one of the most enshrined substances – gold.  This transformative chemistry forms a symbolic reference to her artistic process of restoring value to that which has been lost and overlooked.
In Aqua Regalia – Chapter Two, multidisciplinary works created with ink, graphite and oil paint are complimented with mixed media collages that utilize articles the artist has collected in various countries. Findings include international currency, torn pages from books and magazines, signage, vintage film and photographs, playing cards and government records. Atop this expendable paraphernalia are her representational depictions of incarnated divinity, animals, sacred geometry and text. By associating such imagery with rejected materials a narrative is drawn. A question posed, can projected meaning compel us to reconsider an object as indivisibly connected to our experience and understanding?

In conjunction with the exhibition, the gallery will release a 35 edition lithograph inspired by the mural Capax Infiniti,which the artist painted in Portland, Oregon (2014).

More about the artist: http://faith47.com/