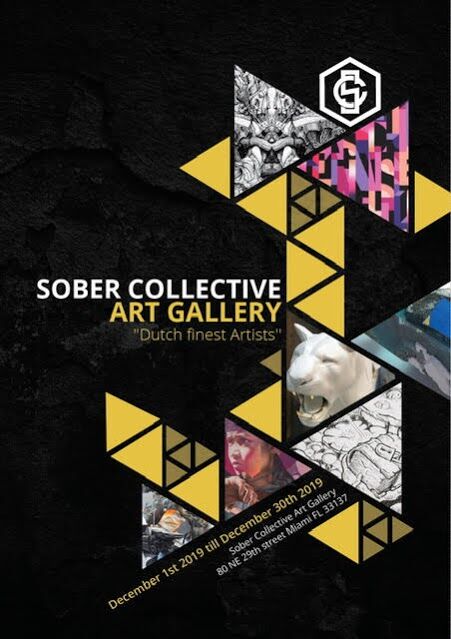 They’ve crossed the ocean for Miami’s biggest art festival of the year.

Eight of Holland’s greatest creative minds have joined forces to create a visual playground at the Sober Collective pop-up art gallery in the heart of Wynwood during Miami Art week 2019. Known for their public art projects and street art exhibitions with world’s most prolific artists at their gallery in Rotterdam and around the world, Sober Collective Art Gallery brings their pop-up exhibition from December 1 through December 30, 2019. Known as “The Dutch Master of Light,” Tim Boin curated this selection of 8 of the best Dutch street artists in cross-combination with his own solo exhibition ‘Geometry is Life’ at the W South Beach during Miami Art Week. His group of artists all excel in bold, abstract and unconventional large-scale work found internationally and celebrated globally.

Tim Boin: Conscious elements are at the root of Tim’s message. Celebrated for his larger-than-life sculptures, he depicts the ecosystem’s sensitive state. Using 3D Mapping, Tim literally and figuratively sheds light on his geometric sculptures of endangered species in his most recent work.

Digital Does: He focuses on collecting pieces from past walls and reshaping them into a new form to use as core elements in his new pieces. He perpetuates the past and makes new work traceable to a specific google coordinate of a bygone wall. From China to Mexico and Australia to New York, his work has been found all across the globe.

Said Kinos: His work expresses a fascination for the way people communicate with each other. It’s recognizable by his high-contrast use of distorted typography. His visual overkill is a metaphor for the amount of information we have to process on a daily basis.

Telmo Miel: This creative duo evolved from creating individual pieces on one mural into developing one image, one composition together. They focus on playfulness in abstraction of reality; attempting to make the viewer see opposite perspectives and subjects with a different eye.

Joram Roukes: Using juxtapositions of imagery, he creates abstract narratives and figures that evoke introspection and contemplation. His work gained attention from several international galleries, and he actively paints large-scale murals across the globe, including Copenhagen, Paris, Berlin, San Francisco, New York, Los Angeles and London, to name a few.

Bier & Brood: Inspired by machines, nature and architecture, they possess a unique style, often interpreted as sinister and apocalyptic. Their preferred mediums include highly detailed pen drawings, spray-cans and paint for their large-scale work.

Mossy Giant: He has a slightly neurotic fascination with detailed line-work and stories within stories. Not made for the easily distracted, recurring themes in this work include nature, man, beast & machine.

Zevous: His company, Dutch Deco Finish, specializes in wall and furniture finishes for amusement parks and large festivals, which has led to over a decade of developing relationships with artists worldwide; and after these artists began approaching him to commission exclusive works of art, it has inspired him to create his own extensive portfolio.

PREVIEW: Appointment requests can be made to visit the exhibition before the official opening on the 8th of December. We therefore strongly recommend to contact us via [email protected] as soon as possible to reserve a spot.