Swinton Gallery presents  the first solo exhibition by artist Alice Pasquini (Rome, 1980) in Spain.
Alice Pasquini is one of the most recognized names in the international Urban Art scene, both for her murals, as well as her studio work, which is present in museums, galleries and collections all over the world. Her exhibition at Swinton Gallery is her first solo exhibition in Spain, fittingly in Madrid, where she lived for several years after completing her studies at Rome’s Accademia di Belle Arti.

The Roman artist is currently developing several lines in her artistic research. She loves transferring her hundreds of sketches both to the walls of the cities she visits as well as the surfaces of found objects. But for several years she has also delved into the possibilities of three-dimensions in her production. In this way, Alice Pasquini works in two distinct, but closely related, aspects:

On one hand, her interest on intervening in urban space. In fact, Alice is considered one of the pioneers of female urban art in Rome, and she has exported her work to cities around the world such as Sydney, New York, Oslo, Moscow, Paris, Copenhagen, Marrakech, Berlin, Saigon, London, Barcelona and Madrid.
Naturally, these trips soon became a source of inspiration. The Roman artist accumulates sketches of the experiences, landscapes, and faces found by her all around the world—creating a personal, visual diary. A string of impressions and feelings, the sketches work their way into her studio production and the walls of different cities.

” Even the walls that I paint are portions of reality in which represent an ideal.”

For Alice, urban intervention entails a profuse study of the environment, the people who will live with her art and the life that each piece will have in its urban context. This research is one of the characteristics that has led her to the top of the urban art scene, shining on an international scale.
“Once gone, my tracks continue to evolve with the city. In many cases, resistant to weather and aging together with the wall. They become an integral part of that place and that story.” 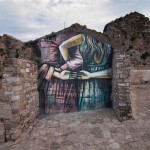 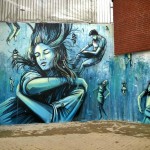 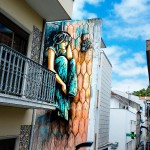 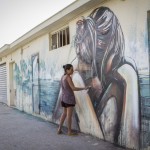 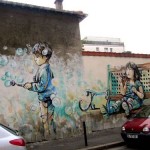 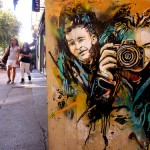 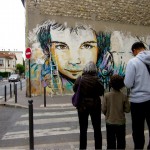 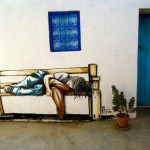 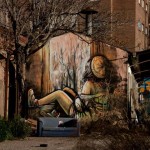 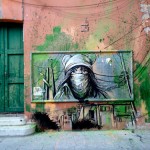 Alice also stands out for her studio work. The pieces keep the notable characteristics of what she paints in the street: a pictorial line, personal and recognizable, as well as characters immersed in their daily lives, diverse and lyrical.
In her art, Alice depicts timeless, universal emotions. Her art focuses on feminine imagery from an everyday perspective, with nuanced language and an intimate tone. Real women who feel and enjoy life, they always show themselves strong and determined to live. Brave women.

She prefers painting on paper and objects abandoned on the streets. The title of the show, “Nothing Lost”, refers to the new life that Alice gives to these forgotten things. Alice recomposes the soul of these ancient objects, transforming them into artwork that, by bringing out their beauty, comes back to life.
” My need is to restore value and life to surfaces marked by time—abandoned objects. In the studio I love to work on recycled materials, giving them new life, where it be old refrigerators, collages or old maps, thus generating new art.”

Currently, Alice is also investigating new ways of viewing her work, such as 3D, and this possibility will also be offered at Swinton Gallery. The installation results in an immersive effect that brings out the full emotion of the viewer, who will dive into the visual enviroment created by the artist. This project has been developed in collaboration with the photographer Stefano C. Montesi.

Opening reception: February 3rd 20.00 @ Swinton Gallery, in the presence of the artist.