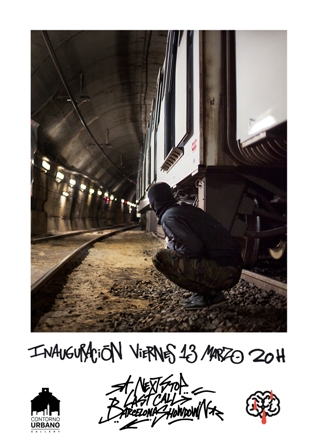 On March 13, Contorno Urbano Gallery will open the exhibition.

DOCUMENTARY PHOTOGRAPHY- GRAFFITI- METRO
After a small winter break, Contorno Urbano Gallery reopens its doors to give way to “Next Stop: Last Call Barcelona Showdown” a show focused on the action graffiti photography by Mark Madness. A sick exploration of the Barcelona metro that recounts the context where graffiti writers act and how they develop their interventions.

The inauguration will take place on March 13 at 8:00 p.m. at Contorno Urbano Gallery, in L’Hospitalet de Llobregat. It can be visited until April 10 giving way to the next gallery exhibition.

This exhibition will be the last step before the launch of the book “BARCELONA SHOWDOWN”, a publication focused on the documentary photographs of Mark Madness. Mark stands out as a photographer for his overall vision and peripheral control of all the circumstances of the suburban game board. Tension, creation, confrontation and negotiation are aspects of graffiti to which Mark gives a personal meaning through the camera, generating photographs that have already splashed publications such as Egowar Magazine and Tramontana.

In the exhibition you can also see a selection of the illustrations Alejandro Alonso has designed for the book. Likewise, it will feature a sample of the archive photographs provided by the most relevant writers in Barcelona, ​​unpublished so far. In addition, the exhibition will be accompanied by a brief presentation by Jaume Gómez.

With this exhibition, Contorno Urbano Gallery aims to bring the general public to the work of photographer Mark Madness, which reflects all invisible details such as tension, adrenaline, anxiety, oppression of spaces or euphoria of suburban graffiti. All this through the creation of a type of graffiti unknown to the general public, very difficult to capture and of which we only contemplate the final result of the pieces in some of our daily routines when climbing the subway.