THE WALL THAT (RE)UNITES US – The 4th edition of MURO Urban Art Festival LX_21, an initiative of Lisbon City Hall, takes place in the parish of Parque das Nações, in the middle of summer. 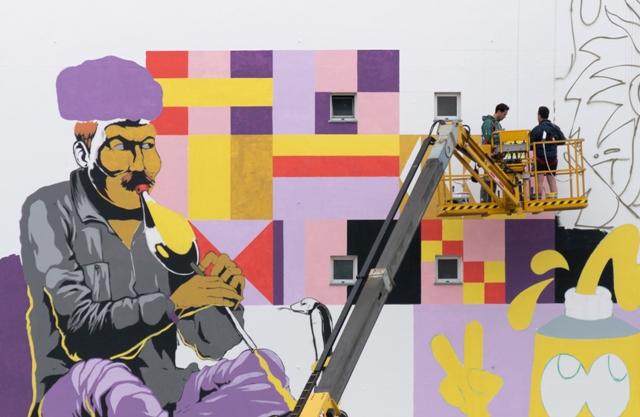 From July 3rd to 11th, MURO LX_21 will, once again, celebrate Urban Art in the city of Lisbon. We want to return to the public space to give people the opportunity to see a large set of new works by new artists. In mention to the spirit of the Lisbon World Exhibition Expo’98, the introduction of urban art into the public art sphere allows us to create connections with the processes of graffiti painting and street art. We will welcome debut artists, as well as some established ones, and we will be able to have giant canvases on the pillars of the Vasco da Gama Bridge, basketball courts, building gables, pedestrian crossings and train walls.

It is in this line that MURO LX_21 presents its 4th edition with several programming proposals, that include the usual workshops, concerts and walking tours, and a new activity: the possibility of visiting the new urban art interventions of MURO LX_21 by bike. A novelty that comes at a good time, since 2021 is the year in which Lisbon hosts the European Capital of Sport.

After its three past editions implemented in the parishes of Carnide (2016), Marvila (2017) and Lumiar (2019), that brought to these territories 157 artists who created 112 pieces of urban art in about 17 thousand m2, MURO LX will arrive in three areas of Parque das Nações with the motto THE WALL THAT (RE)UNITES US, a meeting propelled by the transforming force of urban art in our capital, this year marked by the strong presence of graffiti artists. 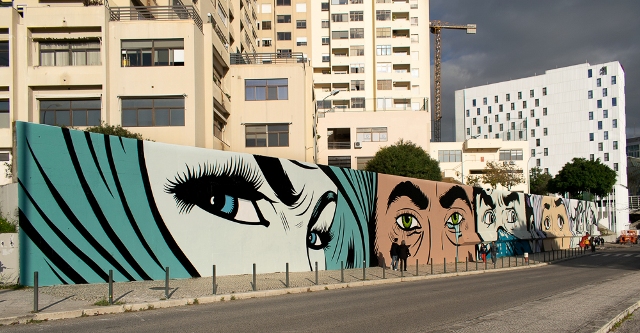 The Multicultural core, in Casal dos Machados, interconnects the concepts of community, nations, cultures and equality through interventions on the gables of buildings and walls. In this area it is already possible to visit one of the two interventions that integrate the 4th edition of MURO LX_21.

The first intervention, finished in November 2020, has been made by D*Face, the London artist that became famous for having applied the stickers technique on graffiti and for being admittedly influenced by Pop Art. Under the title It’s all in the eyes, D*Face created a mural on Av. Aquilino Ribeiro Machado with recurrent characters from the paintings he has created all over the world.

The second intervention, finished a few days ago, has been made by the RUA Collective from Porto – composed by the artists Contra, Draw, Fedor, Oker, The Caver and Third – that debuts as a collective in this edition of MURO LX_21. The RUA Collective has made the intervention “Atlas, Show High the World on your Shoulder” (Fernando Pessoa), in a gable of Rua Padre Joaquim Alves Correia, where all possible genres of urban art can be recognized, reflecting the multifaceted set of urban artists.

It is also in this core that the Australian street artist Vexta will make her debut in Portugal and in the festival, bringing to this neighborhood the psychedelic kaleidoscope she reinterprets with sacred elements within cosmology, mythology, life / death and the feminine.
The Sustainability core, on Av. de Pádua, highlights the constant increase in the quality of the environment and life in Lisbon, often mediated by the arts. An intervention will be carried out in this area that will take advantage of the square and the walls supporting the train line for a sculptural intervention, and the pedestrian and road crossing tunnel with a lighting intervention. The Portuguese artist Bordallo II, internationally known for his works that use garbage as their main raw material, in the form of a universal manifesto against the destruction of the planet, is one of the artists confirmed for this area.

The Urban Culture core, in Tagus Park, will highlight the peculiar strength that MURO LX_21 exerts as a meeting and crossing factor through a strong presence of graffiti in the pillars and wall of the Vaso da Gama Bridge, as well as in the basketball courts to be created and in the Skatepark. Two graffiti artists with great international exposure will leave their trace in Parque Tejo: Portuguese writer Odeith, known worldwide for the 3D effect he provokes in his works through the use of optical illusion, and Colombian writer Zurik, recognized for the game she creates between the organic, the geometric and the volumes of technical drawing. We will also have 3 street basketball courts designed by Thunders Crew, where a galaxy of national graffiti stars is gathered with names like Bray, Chure, I’m From Lisbon, Klit, Mar, and Mosaik, in what is intended to have graffiti as a driving force and artistic presence.

The Gare do Oriente is added to these three areas as a meeting point for the cores and their themes, and as a starting and ending point for many of the activities proposed in this edition of MURO LX_21. In this core we will have two important exhibitions, a solo exhibition by Odeith with his 3D objects, and a retrospective of the Crack Kids gallery, with an exhibition of silkscreens since the creation of the first Montana store in Bairro Alto until today with the various exhibitions that have taken place, and which have contributed greatly to the affirmation of urban art in Lisbon.

In addition to the planned program, MURO LX_21 invites artists to participate in an international open call. The open call Artist MURO LX_21 invites artists from all over the world to send proposals to intervene in two gables in Bairro Casal dos Machados, the Multiculture core. People, cultures, nations and the richness of diversity will be the motto for the presentation of proposals for artistic intervention. Applications are open until May 19th, 11:59 pm. More information here.

The full program of MURO LX_21, as well as the parallel program of the festival, will be announced in June.

MURO Urban Art Festival LX_21 is an initiative of the Urban Art Gallery of Lisbon City Hall, developed in partnership with the Parish Council of Parque das Nações and Gebalis.